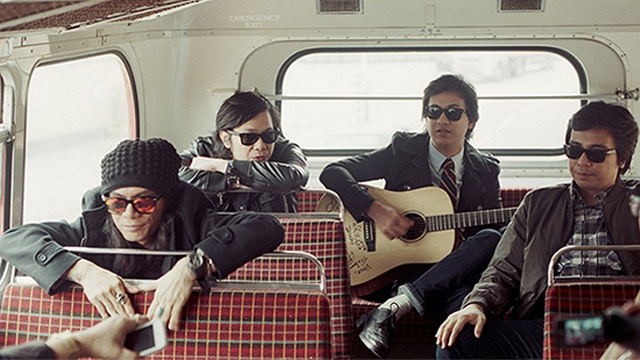 Are the Eraserheads Making Movies Now?

With the studio behind Kita Kita.

During the celebration of their 10th anniversary on January 28, Spring Films posted photos of their upcoming projects in 2019 on their Instagram Stories. They've got exciting ones in the works—including a reunion movie starring Kita Kita's Empoy Marquez and Alessandra de Rossi. But a couple of other posters also caught our eye.

The poster for The Bouncer looks like a mop is cleaning away blood. Take a closer look and you'll see that it's directed by Eleandre Buendia a.k.a. Eraserheads frontman Ely Buendia.

There's also a dark-blue poster for a film entitled Post Angst. On the bottom, it says the movie will be "starring the only brave actors of the Philippine Cinema."  What's also interesting is that it's written and directed by Marcus Adoro, the lead guitarist of Eraserheads.

And if you're an Eraserheads fan, the title Maboteng Usapan might seem familiar to you. (It's one of the lines in "Pare Ko.") The poster for the movie features a female version of the Oblation statue holding—what else—a bottle. It's worth noting that the Eraserheads' alma mater is the University of the Philippines (not that you didn't already know that). According to the poster, the movie will be directed by Steven Paul Evangelio.

No announcements have been made yet about the plots of these movies, but there's no doubt fans will be lining up to see them.

Update as of January 30, 2018 (5:00 p.m.): On its Facebook page, Spring Films has posted the official log line of the three movies. In Buendia's The Bouncer, "A man hardened by violence decides to turn over a new leaf and reunites with his blind niece as he tries to defend the club he is working for from shady regulars. But at what cost?"

The description for Adoro's Post Angst says, "In what seems to be a stoner film, music and medical marijuana thread together the stories of five men who try to face their own demons and explore uncharted territories where existential crises and reality merge."

Maboteng Usapan is mentioned as UP Project, with the description being, "Boy meets girl in college, embarking on a wide-eyed exploration of sex, fears, love, and friendship in a time fraught with uncertainties."

Eraserheads Spring Films Ely Buendia Marcus Adoro The Bouncer Post Angst
Your Guide to Thriving in This Strange New World
Staying
In? What to watch, what to eat, and where to shop from home
OR
Heading
Out? What you need to know to stay safe when heading out