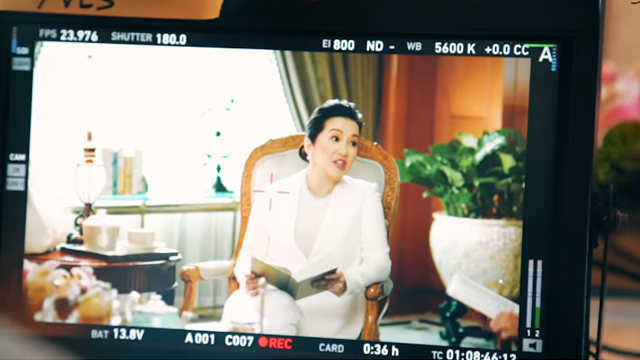 It's what got her cast as Princess Intan!

(SPOT.ph) It's been more than half a year since Crazy Rich Asians brought Kevin Kwan's best-selling book to life on the big screen. The movie, directed by Jon M. Chu, was a box-office hit around the world, what with its groundbreakingly inclusive cast, charming love story, and of course, its grand production.

Crazy Rich Asians was an even bigger hit in the Philippines—to the point that Kwan himself singled out Filipino fans for making it the number-one movie in the country. One thing Pinoy fans were waiting for, after all, was the appearance of our very own Kris Aquino as Princess Intan, a Malay royal who attends the wedding that Rachel Chu (Constance Wu) and Nick Young (Henry Golding) attend. Aquino has openly talked about the process of her landing the role, but it's only now that she's finally showing the audition tape to her fans.

In the caption for the video, Aquino says it took her a long time to share the tape because of a quote she saw: "The best moments of my life don’t make it to social media." But she says that the scene she's in—where Rachel realizes her self-worth with the help of Princess Intan—affirmed everything she "believes in as a woman."

Aquino spared no expense for her audition tape, where she acted out scenes as Eleanor Young, Nick's mother. It was, after all, what the casting directors were going to base their decision on. In a report by Pep, she shares that she received a script that she had to act out. So, she booked a suite at The Peninsula Manila, which underwent production design to make it look like a rich Singaporean home—couture, designer bags, and tea sets included. She gathered a team of about 20 people, including stylists and consultants, to help her produce the tape, which she then submitted the very next day. It wasn't until 10 days later that she found out that she got the role.

And while the audition tape played a part in her getting cast, Aquino also says that aside from her English-speaking skills, having millions of Filipinos around the world also got the producers hooked. "The line daw that really got to them was, 'In a country of 100 million, where 10 million of those residents are working abroad, and in one of the largest active democracies in the world, there is only one queen,'" she says, referencing her "Queen of All Media" nickname.

Kris Aquino Crazy Rich Asians
Your Guide to Thriving in This Strange New World
Staying
In? What to watch, what to eat, and where to shop from home
OR
Heading
Out? What you need to know to stay safe when heading out