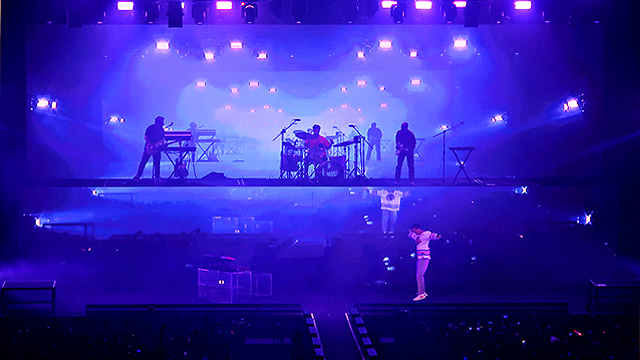 Manila and LANY love each other so bad.

(SPOT.ph) "Oh, my heart hurts so good," croons American indie-pop LANY in their hit single, "ILYSB." And that’s exactly what it felt like in the midst of the energetic crowd singing along to their synth-driven, catchy anthems at the Mall of Asia Arena for the second show of their Malibu Nights World Tour in Manila.

This was unlike other concerts where you could easily tell which were released tracks and which ones were the “deep cuts” of their EPs and albums, judging by how loud (or quiet) the crowd was. Almost everyone in the sold-out crowd—mostly teenagers and young-adult females—were singing their hearts out for almost two hours, like a release they didn’t know they needed. It makes you wonder if breakups and relationship troubles are actually a good thing when you have therapeutic power tunes to get you by.

But that's not the only thing that Paul Jason Klein, Jake Clifford Goss, and Les Priest, as well as touring member Giuliano Pizzulo, bring to the table, or in this case, stage. The dynamic visuals on the massive LED screens, which changed depending on the song, showcased the band’s aesthetic (they did say they are the "most artistically thoughtful band in the world.") The backdrops range from old-school elements like TV static and MS-DOS-inspired typography to more hip treatments like gradients and monochrome patterns. The screens were also strategically designed as part of an elevated stage for Goss, Priest, and Pizzulo, where they mostly stayed for the rest of the evening. There were no fancy costume changes—the L.A.-based band wore the usual shirt-and-pants combo, or in the case of Klein, a loose jersey.

The VHS-inspired timer counting down to zero (plus the ear-shattering screams) was the band’s cue to launch into the deceptively blissful-sounding “Thick and Thin.” For those in the VIP section, it meant running towards the stage, and for everyone else, it was their cue to sing along or enthusiastically wave their pink light sticks in the air. The band quickly followed it up with "Good Girls," an electronic beats-heavy bop where Klein took the opportunity to alternate between walking down the runway and standing on a box to control the synths.

Just before launching into a couple more songs, Klein briefly addressed the audience like an old friend—it’s day two of three, after all—and said, “[This] potentially could be the best show of our lives.”

And as if to prove him right, the crowd showed that they could exceed expectations. Everyone lost it when the band played their slew of relatable songs, from the moving-on anthem "I Don't Want To Love You Anymore" to its lyrical opposite, "Taking Me Back" with the words to the song flashing on the screen, videoke style, to a crowd who honestly had no need for it. Towards the end, Klein injected some drama by lying face down on the floor as the intro played, then picked himself up and positioned himself in front of the keyboard, complete with flashes of lightning and drops of water in the background to set the mood for "Thru These Tears." These three tracks came from a record written after a heartbreak, according to interviews with Klein.

There was also a bit of '80s influence going on in "Yea, Babe, No Way," which sounded like a long-lost road-trip song, and "Made in Hollywood," where Klein showed off some adorable moves—no trace of choreography here, just a guy getting his groove on naturally. Everyone followed suit when he raised his arms and swung them from side to side in "Hurts."

Things calmed down when they performed their slower, more somber tracks. LANY made use of the B-stage for “13,” where the members eased up a bit with playful interaction. The mood especially changed with the stripped-down version of “Hericane,” where you almost got the impression that the now-hushed audience just wanted to intently listen and take it all in. Meanwhile, “Malibu Nights” got a more dramatic, rock-infused arrangement that perfectly suits the question of the song: “What do you do with a broken heart?” Towards the end of the set, the band effectively drowned in the collective singing, notably in the upbeat “Super Far,” and didn't let up until the last song, the crowd-favorite "ILYSB."

"No one tops you, Manila. No one," Klein declared after introducing the band midway into the set, to which he encouraged the crowd to chant for each member of the group, and as LANY.

For most of the night, it was up to Klein to work up the crowd as he paced back and forth on the stage and the runway, trying his best to equally give attention to all sides of the arena. Not that he needed to. In fact, at one point in the concert, it slipped: "I knew tonight was gonna be better than last night," Klein enthuses, surveying the crowd. But it doesn't matter if he plays favorites, as he makes a promise to the audience: "I'd like to come back for the rest of our lives."