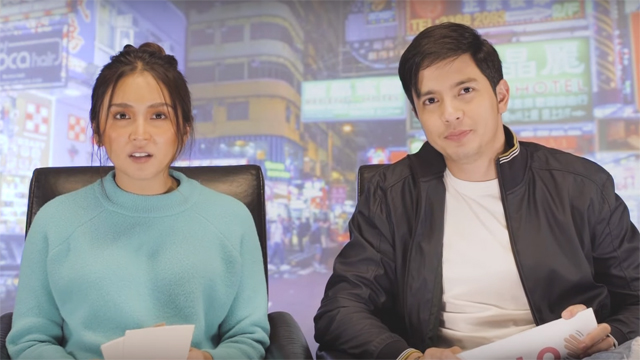 Are they like the characters they portrayed in the film?

(SPOT.ph) Zeroing in on overseas Filipino workers in Hong Kong, packing an intense love story fueled by sacrifice, and interspersed with humor, Hello, Love, Goodbye brings a lot to the table as is, but a big part of why it works so well is because of the chemistry of the two lead actors: Kathryn Bernardo and Alden Richards. They showed their acting skills in the film but beyond the movie screen, the two seems to also have a great friendship.

This video from Star Cinema makes Bernardo and Richards go through the "Hello, Love, or Goodbye Challenge" where they are given three options and must select which one they will welcome with a hello, love completely, or bid goodbye to.

Bernardo and Richards share the same love for Japan and for their cars, but have chosen differently between frogs, snakes, and crocodiles. They were asked to categorize love, dreams, and family, and Bernardo points out that the difference in their choices strays from the characters they portrayed in the film, Joy and Ethan.

Hello, Love, Goodbye is now the highest-grossing Filipino movie of all time with a gross of P880 million as of September 4, beating out The Hows of Us, also starring Bernardo, which previously held the record with P810 million. It is the first time ABS-CBN star Bernardo starred in a movie without love-team partner Daniel Padilla. She stars opposite Richards, who comes from GMA and was once paired with Maine Mendoza.