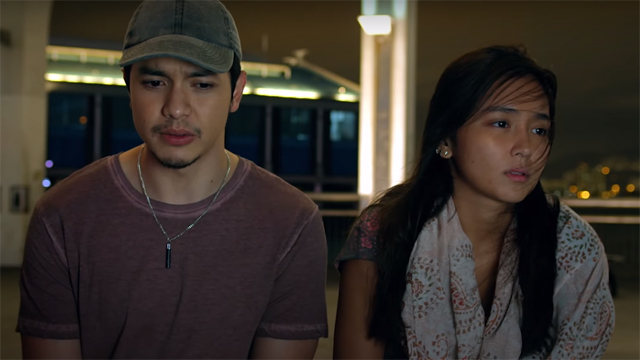 10 Things We Can All Learn from Hello, Love, Goodbye

A few nuggets of wisdom from the new Kathryn Bernardo-Alden Richards flick.

Though mentioned every day in passing, those three words can change lives—Ethan del Rosario's and Joy Fabregas' included—as we see in Hello, Love, Goodbye, directed by Cathy Garcia-Molina. Selfless and diligent Joy, played by Kathryn Bernardo, hustles day and night in Hong Kong just to provide for her family back in the Philippines while free-spirited and outgoing Ethan, played by Alden Richards, concocts drinks and juggles women without any regard for making deeper connections. Discussing the trials and sacrifices of Overseas Filipino Workers in foreign lands, the film shows how responsibilities and commitments can bring two people together, but also drive them apart.

Love teams are an enduring aspect of Pinoy entertainment. Though this isn't their first time to break away from their usual screen partners, the lead stars of Hello, Love, Goodbye come from different networks, too: Bernardo is known as half of the popular tandem Kathniel with Daniel Padilla in ABS-CBN, while her leading man in the film is played by Richards from GMA, who rose to fame because of his partnership with Maine Mendoza called AlDub.

Aside from the punchy dialogue and kilig scenes, the film also sheds light on a lot of things you might not expect to learn from a rom-com. Though romantic, humurous, and cinematic all at once, it drops nuggets of wisdom along the way, 10 of which we list here:

The glamorous streets and malls of Hong Kong, as well as its popular tourist destinations like Disneyland, are not to be missed, but that's not all that the city has to offer. In between the shiny glass and steel beams is a Hong Kong that's very much alive, filled with pockets of people hard at work carrying the city's weight on their backs. It's not as posh or as sleek, but this side of Hong Kong is human and shows the city from a new perspective.

When in Rome, do as the Romans do.

In the film, we see Filipinos adjusting to a way of life that's very different from what they're used to at home. For most Filipino staff and domestic helpers, it means learning an entirely new language just to communicate and getting breaks only on Sunday. They also have to learn the names of new streets and navigate the landscape of an unfamiliar city.

OFWs have it hard.

There are no words to properly capture how difficult it is to be an OFW, and a domestic helper in this film specifically. Joy, along with her fellow Filipino workers, often gets into fights with her foreign boss and is only permitted breaks on Sundays. She's not allowed to engage in any other business outside of being a domestic helper and she has been separated from her family for years, with little to no appreciation and understanding given in exchange for the many sacrifices she has made.

Something unexpected can actually work out.

Kathniel and AlDub are already established love teams, so it's understandably hard to imagine Bernardo and Richards together. Though unexpected, the team-up delivered with a rom-com that has just the right slice of life on top. Bernardo's serious side is just the right foil to Richard's cheeky demeanor, and this push and pull makes for great banter and engaging dialogue.

That's what most people say when shifting to more serious matters in life such as adulthood, committing to relationships, and following through with decisions. In the case of Bernardo and Richards, they took on more mature roles that carefully reflect the daily decisions and tribulations you encounter while growing up. The two actors are known for their lighthearted romances, but they handled this one with maturity and dedication, and it suits them well.

Some people are worth the risk.

You meet someone in your life and you've given it your all only to be left high and dry. It only makes sense for you to be fearful of giving love another shot, going as far as to say you'll never love again, but then you meet someone absolutely intriguing and magical and for a moment, you consider giving them a chance. Hurt and baggage from previous relationships can weigh anyone down (we're looking at you, Ethan), but closing doors on possibilities is even sadder.

It's never too late to turn things around.

Ethan and Joy were stuck for a point in time until they finally decided to take their fate into their own hands and do what they always dreamed of doing. Changing habits is a difficult path to tread, but both of them know that if they really want to get somewhere, they have to change their mindsets and get down to business.

We're not saying choosing one over the other is always right, but as Bernardo asked in the film, "Kung mahal mo ko, bakit pinapapili mo 'ko?" Thing is, there are points in your life you might not be able to have everything you want, but it's all a matter of carefully weighing your options and going for whichever your heart feels more strongly about.

Clarity and communication is important.

Every relationship requires an adjustment, especially when it comes to communicating. And no matter how clear you think you are, there are times when you might need to be even more straightforward—as Ethan and Joy learn the hard way.

Choosing yourself is not always selfish.

Times can get tough and for some, they hold it out for their loved ones or other important people. In Joy's case, there was never a day in her life when she thought of herself. There's this investment in being selfless to a fault but it prompts the question, "When do you choose yourself?" It can be easy to get used to prioritizing other people, but it's not bad at all to, for once, think about what you want and what you see for yourself.