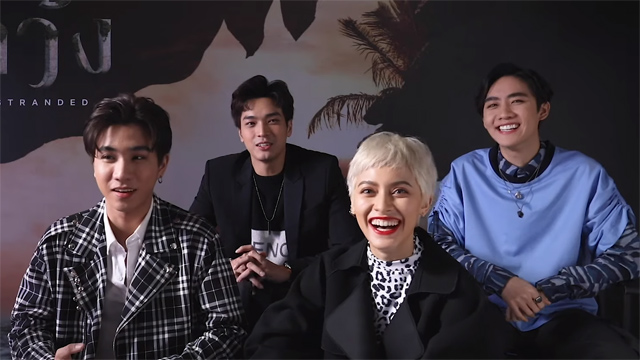 It's the first Thai original on the platform!

(SPOT.ph) It's not every day you get the chance to appear on a series produced by streaming platform Netflix. For Oabnithi "Oab" Wiwattanawarang, Tanapon "Perth" Sukhumpantanasan, Siwat "Mark" Jumlongkul, and Chanya "Ning" McClorly, being part of the cast for The Stranded, Netflix's first Thai original series, is a huge responsbility and honor. We got the chance to sit down with them in Thailand to ask about how filming was like, and what viewers can expect from the Thai series.

The Stranded takes place on the fictional island of Pintu, which means "door" (but we'd like to think Filipino viewers would pick that up). They shot in several provinces around Thailand, but filming on an island for about 14 days was quite an experience for the cast. Oab says the island is quite deceptive as it's beautiful, but it's the temperature that gave them a hard time. Regardless, the cast still did their best.

There are a lot of expectations for this original, but all of them agree that there's something to look forward to for everyone. "There’s no other Thai series that has this Hollywood level of CG. So this is something to be very proud of," Perth shares. He, along with the rest of the cast, hopes that it lives up to the Netflix standard. All in all, the cast have their high hopes for the series, and Oab in particular says that "it’s a huge production made by Thai people. It is something the usual Thai series would not be able to do or be."

The Stranded is now streaming on Netflix.