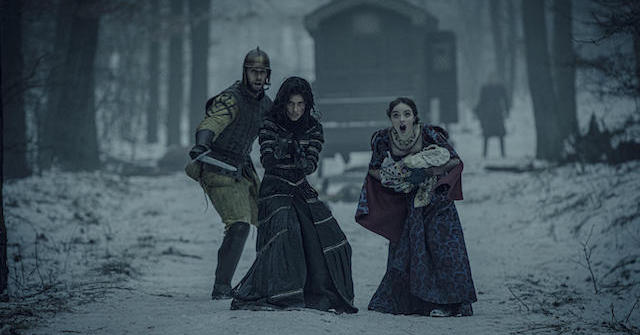 (SPOT.ph) The thing about women in fantasy and sci-fi is…well, if we’re being honest, the same thing that often happens to women. The microscope is set to maximum, in a sense, and you can forget about the objective lens. But Andrzej Sapkowski, author of The Witcher, writes them in their struggle, and is unafraid to put them against one another, because that is the sad truth when there are so few seats at the table for them. Taking that reality with the magic, snark, and compassion of illustrious showrunner Lauren Schmidt Hissrich (writer for The West Wing, Private Practice, and Daredevil) for the Netflix adaptation and you get female leads who can be hard to understand, but are even harder to stop rooting for. We will get to know these characters alongside Henry Cavill's strong and silent Geralt of Rivia when it starts streaming on the platform on December 20.

We had the chance to speak with Anya Chalotra and Freya Allan on their characters, as well as how their lives and perspectives have changed since donning the costumes.

In the case of Chalotra, an English actress of Indian descent, the mixed reactions towards her casting as Yennefer of Vengerberg were disappointing, but unsurprising. “What can I say about it?” she says. “I’ve [just tried to focus] on all the positive reactions out there. It would be so easy for me, with the pressure of playing such an iconic character, and because I care about those fans, [to focus on the negative], but actually there’s so much positivity out there. [I care about] the work, and bringing this to life in the most truthful way.”

On her character, Yennefer, she says, “There’s no questioning what she will sacrifice to be the version of what [their society] views as beautiful and powerful. She’ll learn later what the consequences of that are, [and she debates with herself], but she realizes that her goals [have always been the same]—to find true connection and unconditional love. Then there’s her attitude towards the institution… This chaos inside her actually becomes the source of her power.”

Young Allan, who plays Princess Cirilla of Cintra, says she finds the core strength of the character in her vulnerability. “She has seen the most horrific things, and experiences the most overwhelming amount of loss. She’s going through that pain… but she goes on." She adds, "[I realized] that takes a huge amount of determination, drive, and real strength. [And] how open-minded she is; she’s gentle and kind, and she’s able to understand other people’s viewpoints, [even if they’re] totally opposing views. So I think it’s nice to get to see that kind of strength, rather than [outright physical strength]—instead of fighting or killing. Ciri’s storyline was challenging because she’s suddenly very, very alone. I’ve never had to experience being as alone as she is.”

It isn’t all darkness and war and climbing political ladders on The Witcher, though. Joey Batey (The Riot Club) plays Jaskier (Polish for "dandelion,"which is his name in the video game), a well-meaning bard who follows Geralt through some of his adventures. “I was watching [an episode] last night,” says Allan, “and I was literally in stitches. I replayed this clip [of Jaskier] about five times, I couldn’t stop laughing. He’s just brilliant, and Jaskier is a brilliant character. Joey brings him to life in a beautiful way. He’ll touch hearts.”

So far, Netflix’s take on The Witcher promises strong female leads, humor, and fight scenes that will keep you on your toes with how close the calls come. Three words: We. Can’t. Wait.

Season 1 of The Witcher premieres on Netflix on December 20.