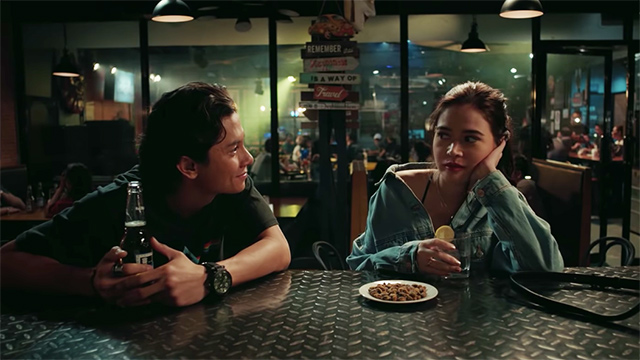 On Vodka, Beers, and Regrets brings alcohol and a whole lot of pain.

(SPOT.ph) A relationship at its best is all kinds of wonderful, but at its worst, it's absolutely devastating. Alcohol doesn't exactly solve any problems, but it provides escape for a broken heart. As liquid courage rushes through your veins, you get a little braver and more adventurous, and while that means room for new experiences, it also means a lot of regrets. If you're still recovering, stuck in between, or slowly falling in love all over again, the trailer of the upcoming Viva film On Vodka, Beers, and Regrets—starring JC Santos and Bela Padilla—will hit close to home.

Santos and Padilla always seem to play characters in complicated relationships (look at Open and Meet Me In St. Gallen) and this film is no exception. Padilla plays Jane, a bitter and broken girl who's in the process of getting over the boyfriend (Matteo Guidicelli) who left her. She goes drinking one night and meets Santos' character, a romantic who welcomes her into every bit of his life, and shows no problems showering her with love. Jane, however, isn't too keen to commit. As their ambiguous relationship reaches a breaking point, the two characters must face their insecurities and respective pasts head on.

The Viva Films flick is written and directed by Irene Emma Villamor, who directed Camp Sawi, Meet Me In St. Gallen, and Ulan. Padilla and Santos first worked together in 2017 on 100 Tula Para Kay Stella, and have gone on to star in other films individually. On Vodka, Beers, and Regrets is the second time Padilla and Santos are co-starring in a film.