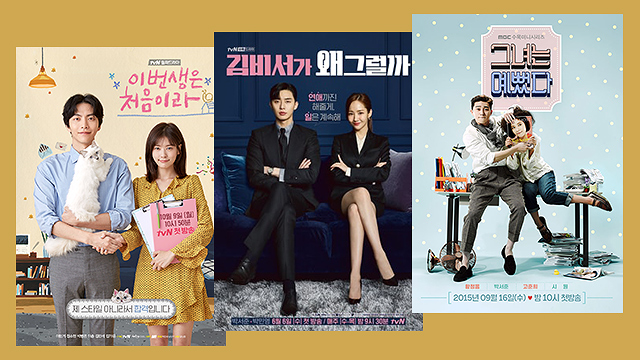 These K-Dramas With Happy Endings Will Lift Your Spirits

You can count on these shows to bring on the good vibes.

When you're down in the dumps, there's no motivation quite like the promise of dedicating yourself to a TV show that ends well, one way or another. We round up light-hearted rom-com K-Dramas to binge-watch that will lift your spirits for sure.

Also read:
10 Old-School K-Dramas That We Used to Love
10 Things to Watch on Netflix If You're a K-Drama Fan

Get ready to feel-good with these Korean dramas:

Who doesn't love a good college story to take you back to your glory days? This coming-of-age series follows collegiate athletes as they chase after their dreams while experiencing life and love for the first time. Promising weightlifer Kim Bok Joo (played by Lee Sung Kyung), in particular, finds herself torn between her goals and her unexpectedly blossoming love life.

Both struggling singles in their 30s, a man who struggles to pay for his mortgage (Lee Min Ki) and a homeless woman (Jung So Min) hatch a plan to get married to save money in the process. The two agree to living together but soon realize that marriage comes with complications and demands that they're both ill-equipped for.

Lee Young Joon (Park Seo Joon) is the vice president of his family's company. Self-absorbed and narcissistic, he barely recognizes the efforts of those around him, least of all his loyal and patient secretary Kim Mi So (Park Min Young). Wanting more in life, Mi So abruptly decides to resign from her post of nine years, leading to a series of hilarious misunderstanding that may or may not bring the two opposing personalities closer together.

Yoo In Na plays famous actress Oh Jin Shim whose career takes a fatal hit after being involved in a damaging scandal. This situation leaves her without a project for two years. Upon hearing of a famous screenwriter interested in hiring her for a lead role in a drama, she grabs the chance and prepares for the character by agreeing to become the secretary of a cold-hearted lawyer Kwon Jung Rok (Lee Dong Wook) fully uninterested in her and her antics.

Kim Min Kyu (Yoo Seung Ho), a wealthy shareholder of a financial company, is suffering from a "human allergy" that keeps him isolated and unable to undertake normal interactions with people. His guarded life is thrown for a loop when he takes an interest in an artificially intelligent robot named Aji 3, modeled after its developer's ex-girlfriend. In hopes of getting funded, Aji 3 inventor Hong Baek Gyun (Um Ki Joon), presents his work to Min Kyu. The robot malfunctions in the process and Baek Gyun begs his ex-girlfriend, Jo Ji Ah (Chae Soo Bin), to momentarily take its place, unbeknown to Min Kyu.

Sung Deok Mi (Park Min Young) is a dedicated, professional gallery curator with a dark secret. She's the ultimate fangirl of White Ocean's Cha Shi An (Jung Jae Won). Heck, she even manages a famous fansite for him. When dating rumors of her and Shi An break out, Ryan Gold (Kim Jae Wook), a former artist and the new director of the gallery she works in suggests that they fake date to rid Deok Mi of Shi An's rabid and jealous fans.

Born with Herculean strength, petite and seemingly kind Do Bong Soon (Park Bo Young) is hired by Ahn Min Hyuk (Park Myung Sik), the childish CEO of a gaming company, to protect him from an anonymous threat. He falls in love with her, but unfortunately for him, Bong-soon's already got her eyes set on her high school friend, rookie police officer In Guk Doo (Ji Soo). A love triangle ensues all while Bong Soon struggles to protect those around her, including Ming Hyuk.

When a 33-year-old lawyer (Shin Min Ah) is dumped by her boyfriend of 15 years for gaining weight, she enlists the help of famous Hollywood personal trainer Kim Young Ho (So Ji Sub) to turn her life around.

Louis (Seo In Guk), a shopaholic rich heir of a vast business empire, has his life upturned when he becomes homeless after suffering from amnesia. The unfortunate even then leads him to meeting Koh Bok Shil (Nam Ji Hyun), a simple country girl who teaches him to survive on only the bare necessities.

When her now-handsome first love, Ji Sung Joon (Park Seo Joon), asks to meet up with her, Kim Hye Jin (Hwang Jung Eum) convinces her attractive roommate Min Ha Ri (Go Joon Hee) to take her place and pretend to be Hye Jin. Things get complicated when she finds herself working for Sung Joon's magazine company, where he openly treats her with contempt and disdain, not knowing that she's is his real childhood friend.

Korean Drama K-drama Weightlifting Fairy Kim Bok-joo Because This Is My First Life What's Wrong With Secretary Kim Touch Your Heart I Am Not A Robot Her Private Life Strong Girl Bong-soon Oh My Venus Shopping King Louie She Was Pretty Syndication Syn-00331 Adventurer Savvy Guide Streaming Services
Your Guide to Thriving in This Strange New World
Staying
In? What to watch, what to eat, and where to shop from home
OR
Heading
Out? What you need to know to stay safe when heading out