Biggest Boy Band and Girl Group Breakups of the Last Few Decades
Loading
Already a member? Log in
No account yet? Create Account
Spot.ph is your one-stop urban lifestyle guide to the best of Manila. 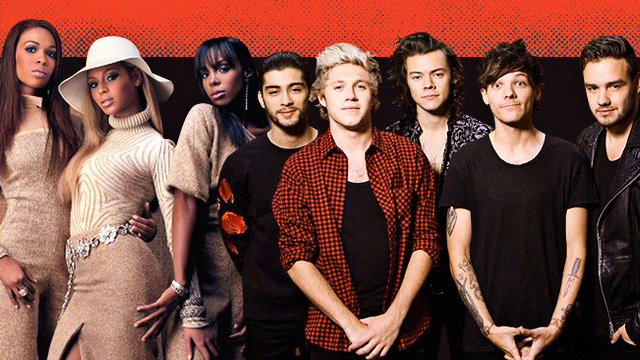 Raise your hand if you've ever felt personally victimized by a musical breakup.

(SPOT.ph) As all our favorite songs and films have already told us before: breakups hurt. Usually we’re referring to the demise of a romantic relationship. However, a breakup can also happen in platonic friendships, family ties, and even in artistic and professional connections—if you’re in the mood for a little bit of each, then boy band and girl group breakups are the place to look. You’ll see common elements in many of these breakups like "temporary" splits that never quite get repaired, a desire for members to venture into solo careers, and often, a lone member of the group who ultimately ends up getting most of the blame.

The recurring formula for both the rise and destruction of boy bands and girl groups shows us things we already know about human relationships (albeit on a more sensationalized scale): interests may diverge, conflicts may arise, and sometimes, ties can be cut forever. At the very least, we’ll always get to keep the songs and the memories.

Here are some boy band and girl group breakups that broke our hearts in the last few decades:

*NSYNC went on hiatus after the release of their 2001 album Celebrity. The album famously featured the song “Gone” where Justin Timberlake sang solo vocals for the first time in the band’s discography. The song was actually meant to be a duet with the late Michael Jackson, though the King of Pop had to back out of the collab as he was unavailable to record at the time. It’s believed by many fans that the song is what gave Timberlake the confidence to take on a solo music career after the band went separate ways. However, it should be noted that the band’s decision to split up was considered to be a mutual one. The band’s other members also took new strides in their respective careers after that. JC Chasez ventured into his own solo music career as a singer and producer. Joey Fatone grew a career in film and television—you might remember him in the My Big Fat Greek Wedding film series or hosting game shows like Family Feud. Chris Kirkpatrick dipped his feet into voice acting, most notably as Chip Skylark, a recurring character on Nickelodeon’s Fairly Odd Parents. Meanwhile, Lance Bass actually tried to become an astronaut. Yup, there’s life after breakups, folks.

In late 2019, The Pussycat Dolls surprised the world by announcing that they were reuniting following a huge comeback performance from the group on The X Factor U.K.—their first time on stage together in nearly a decade. The band first announced their split in 2010 with several of the members eyeing solo careers despite releasing several huge hits in the mid to late 2000s like "Don’t Cha," "Stickwitu," and "Buttons." Reports speculated that there was tension among the girls, particularly concerning lead singer Nicole Scherzinger always taking center stage. In fact, a year before the split, Melody Thornton seemed to throw major shade on stage while performing with the group. She took to the mic in an unscripted moment to say "I'm Melody and I'm a native of Phoenix, Arizona. Let me give a shout-out to my family. Thank you for supporting me, even if I'm not featured." Yikes!

All breakups hit hard, but perhaps none are quite as painful as falling out with your own kin. Pop-rock trio and real-life bros the Jonas Brothers split up in 2013—a move that many fans had been suspecting since youngest brother Nick had first tried his hand at a solo project in 2009 with his band Nick Jonas and The Administration. It was later revealed in the group’s 2019 documentary Chasing Happiness that it was in fact Nick who first initiated the idea of a breakup. Speaking about the topic on screen even brought middle brother Joe to tears. The documentary revealed creative differences among the three as well as disagreements with their management (a.k.a The Disney Channel) and misaligned priorities such as oldest brother Kevin looking to settle down after getting married in 2009. After the split, the band admits they didn’t hang out together for nearly seven years, though they finally decided to reunite and make music again in 2019, releasing a successful comeback album called Happiness Begins.

'90s R&B girl group Destiny’s Child actually has quite a history of rotating members. It first began as a six-member singing, rapping, and dancing group called Girl’s Tyme—'Yonce even referenced the group’s OG name in her 2014 song "Flawless." The Destiny’s Child that you probably know best though is composed of Bey, Kelly Rowland, and Michelle Williams. Throughout the years since their formation in 1990, the group has gone from having six members to four to three and then eventually disbanding in 2005 with the remaining three members choosing to pursue solo careers. Though there was no confirmation from any of the members, rumors say it had to do with favoritism among group members and mishandling of finances. But despite the messy rumors, the three have continuously collaborated on one other’s musical projects throughout the years through song features, performances, and music video appearances.

Believe it or not, it’s been five years since 1D first announced former member Zayn Malik’s departure in 2015. Fun fact: one of the first concerts they performed as a foursome without Malik was actually here in the Philippines—much to the surprise of the audience. Later that year, the band went on to release their fifth studio album Made in the A.M., the first (and so far only) part of their discography featuring just the four remaining members. By 2016, the group announced an indefinite hiatus. Band members like Niall Horan and Harry Styles have told reporters that reasons for the temporary split include rest from a demanding tour schedule as well as each member wanting to pursue other things. Since then, all five members have released solo music projects of their own. In the last few years, Louis Tomlinson, Liam Payne, Styles, and Horan have all hinted at the band possibly reuniting, though no such reunion has yet to take place since the hiatus was first announced. We’ll keep our fingers crossed just in case.

Fifth Harmony got together in 2012 through the American version of competition show The X Factor where they finished in third place. After signing a deal with Simon Cowell’s Syco Records, the five-girl group began covering popular songs on YouTube and recording music, eventually releasing hit songs like "BO$$," "Worth It," and "Work From Home." The up-and-coming group seemed to be taking off more and more. However, in December 2016, members Ally Brooke, Normani Kordei, Dinah Jane, and Lauren Jauregui announced via social media that Camila Cabello had "decided to leave" the group, though Cabello herself denies the claim. Sources say tensions had been growing between the girls and attempts had even been made to rehabilitate the group—particularly due to Cabello’s desire to leave the group. Ultimately, she couldn’t be stopped, venturing into a solo career and releasing her breakout single “Havana” in 2018. After Cabello’s departure, the group continued to perform and release music, but eventually announced an indefinite hiatus in March 2018 to pursue solo projects.

New Kids on the Block

Some relationships end simply because the people involved outgrow each other—a lesson many of us have to learn in real life, and one that boy band New Kids on the Block discovered, too. The group preceded boy bands like the Backstreet Boys and *NSYNC and won the hearts of teen girls everywhere in the late '80s and early '90s. The group disbanded in 1994 to focus on settling down, starting families, and pursuing other projects but eventually reunited years after—they even toured with the Backstreet Boys in 2011! Now that sounds like a mature break-up. No, we didn’t think they actually existed either, but NKOTB proved us wrong.

Melanie Brown, Emma Bunton, Melanie Chisholm, Geri Halliwell, and Victoria Beckham a.k.a. the Spice Girls dominated pop music in the mid- to late 1990s. However, at the height of their success in 1998, Halliwell left the band. Reports suggest that arguments among the girls as well as their demanding schedules had caused it, but Halliwell noted in an interview that a big factor that had pushed her to leave was when she was told by management she wasn't allowed to do interviews for breast cancer awareness. "It was something very close to my heart and it made me question my priorities," she said. Brown stated that Halliwell’s departure was a shock to the group and came with no warning. "[Halliwell] didn’t tell anybody. She just didn’t show up," said Brown. The remaining four continued to tour and even released another album in 2000 called Forever. However, that same year they announced they were taking an indefinite hiatus to focus on their individual careers. Fortunately for fans, the U.K.-based girl group reunited in 2007 with their The Return of the Spice Girls tour where they sang their OG hits like "Wannabe" and "Stop."

If you ask OG Backstreet fans, the group never really broke up—and if you look at the band’s history of taking breaks and reuniting in the last two decades, you may just agree. However, their musical careers in the first few years of the 2000s spurred quite a bit of drama involving everything from disputes with their management company to solo ventures to drug addiction. Basically, they’re that on-again-off-again couple who just can’t get away from each other—except in this case, we’re rooting for them to make it work. The band has reunited several times over the years since their first hiatus in 2001 through world tours, albums (ICYMI, they released two albums as a quartet), and documentaries together. The band released their ninth studio album in 2019 and we’re willing to bet another one isn’t off the table.

Nsync Destiny's Child Fifth Harmony Pussycat Dolls Jonas Brothers Backstreet Boys New Kids On The Block Spice Girls One Direction Boy Bands Girl Groups Entertainment Savvy Adventurer Seasoned Music
Your Guide to Thriving in This Strange New World
Staying
In? What to watch, what to eat, and where to shop from home
OR
Heading
Out? What you need to know to stay safe when heading out