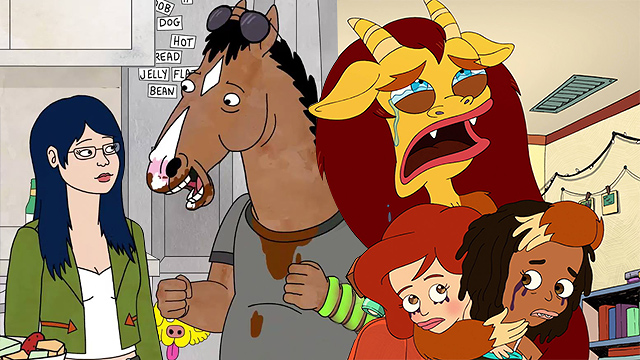 No Kids Allowed: 10 Mature Cartoons to Watch on Netflix

Take your pick from genre-bending parodies and mind-blowing philosophical shows!

(SPOT.ph) Cartoons being made for older audiences is nothing new—OG animation fans have probably binge-watched The Simpsons and American Dad multiple times. Those old-school animated series that adults watched once the kids were in bed—or more accurately, that older teens and pre-teens secretly watched behind their parents’ back—feature many common tropes like dysfunctional families, slapstick antics, some tongue-in-cheek political commentary, and of course, the sitcom perk of every episode resetting as if none of the high jinks ever took place.

Classics like South Park and Family Guy are available on Netflix if you’re looking to get nostalgic, but the streaming platform has much more to offer than just the old-school brand of NSFW animated humor. Below, we round up some adult cartoons you can stream on Netflix, each with stellar animation quality, mature and insightful themes, and clever comedy that isn’t afraid to push the limits.

Check out these adult cartoons on Netflix:

Come for the trippy visuals, stay for the philosophical musings. The Midnight Gospel, created by Pendleton Ward (the mind behind Cartoon Network’s Adventure Time), follows Clancy Gilroy (Duncan Trussell), a young man who uses a device to visit simulations of different universes. In each of his visits, he meets creatures and characters of all forms and species and interviews them for what he calls a “spacecast”—basically a podcast, but in space. He discusses topics like psychedelics, enlightenment, spirituality, forgiveness, and more with these zany characters, all while traipsing through a chaotic, oftentimes collapsing universe.

You’ll find yourself drawn to the conversations, almost like spiritual meditations—the kind that make you feel like a tiny speck in the universe and ease your existential anxieties. Clancy’s spacecast interviews are actually based on real interviews from Trussell's podcast, The Duncan Trussell Family Hour and they feature notable real-life personalities like Doctor Drew Pinsky, political activist Anne Lamott, and author and psychologist Ram Dass.

If you watch cartoons as a way of escaping from the real world, sci-fi animated series Rick and Morty will be a welcome dose of interdimensional adventure and provoking questions about the absurdity of the universe. Based on Doc and Marty from the Back to the Future franchise, Rick Sanchez and his grandson Morty Smith (both voiced by co-creator Justin Roiland) go on epic adventures through the infinite possibilities of the multiverse, often getting into out-of-this-world situations like alien political uprisings, apocalyptic destruction, and even meeting other versions of themselves in different dimensions.

This show is never afraid to hold back and breezes through all kinds of taboo subject matters like death, war, incest, sexuality, discrimination, and the like. Don’t worry though, the clever approach never looks to offend and is always self-aware. If you like dark humor and brain-melting ethical and logical dilemmas, you’ll quickly breeze through each season in a flash. In fact, you’ll want to rewatch every episode over and over.

Don’t let the bright colors and anthropomorphic characters fool you—this show deals with some pretty heavy topics such as addiction, mental health, trauma, and abuse, all with a horse for a main character. BoJack Horseman (Will Arnett) is a past-his-prime '90s sitcom star who is trying to stay relevant in the film and television industry while dealing with the demons of his past. The show follows him on his quest to do so along with a cast of four other main characters including his ambitious talent agent Princess Carolyn (Amy Sedaris), his biography ghostwriter-turned-best friend Diane Nguyen (Alison Brie), his unemployed housemate Todd Chavez (Aaron Paul), and fellow '90s sitcom star Mister Peanut Butter (Paul F. Tompkins).

As the series progresses through six seasons, you’ll get a deeper glimpse into BoJack as well as every character in the main cast—the way each one builds (or sometimes damages) relationships with others and deals with their own respective flaws, insecurities, and struggles. Expect some tears, some life lessons, and some of the most clever jokes, wordplay, and pop culture references you’ve heard in a long time.

Bojack Horseman creator Raphael Bob-Waksberg is an executive producer on 2019’s one-season-only animated show Tuca and Bertie. Similar to BoJack, Tuca and Bertie features some cooky, often over-the-top animal characters (this time, exclusively birds) in human situations. It stars Tiffany Haddish and Ali Wong as Tuca and Bertie, respectively, two 30-year old birds who are best friends and polar opposites. The show follows each of them as they attempt to navigate their love lives, careers, and personal interests all while maintaining their supportive (but sometimes chaotic) friendship.

Dirty jokes and sexual innuendos are a hallmark of most adult cartoons, but perhaps none get as much into the nitty gritty of it all like Big Mouth. The series follows Nick Birch (Nick Kroll), Andrew Glouberman (John Mulaney), Jessi Glaser (Jessi Klein), Jay Bilzerian (Jason Mantzoukas), and Missy Foreman-Greenwald (Jenny Slate) as they go through the awkward perils of puberty. If you remember the humiliating journey of growing into your body and discovering your sexuality, all while dealing with the kids at school, the themes of this show will ring true and you’ll appreciate the effort it takes into depicting the not-so-pretty parts of the pre-teen years. The show cleverly executes conversations about growing up with characters like hormone monsters, ghosts in the basements, talking (and hypersexualized, if you know what we mean) pillows, and more.

Each episode shows Archer and Lana going on dangerous secret missions, often with zany, unexpected twists and some humorous wordplay in between. The show’s unique brand of comedy pokes fun at the overly masculine protagonist often seen in spy films (take James Bond as the token example) with the swashbuckling Archer constantly getting emasculated by his boss-slash-mother and having to deal with mountains of mundane paperwork after each mission. You’ll be laughing out loud at his painfully relatable daily struggles dealing with unpredictable coworkers and office restrictions.

From famed cartoonist Matt Groening (the mind behind modern animated classics like The Simpsons and Futurama) is a fantasy sitcom set in a place called Dreamland—but don’t let the name fool you, this show is far from happily ever after. In the same way The Simpsons parodies family sitcoms while Futurama parodies science fiction, Disenchantment pokes fun at the fantasy genre with the high jinks and misadventures of a rebellious, heavy-drinking princess named Bean (Abbi Jacobson), her dimwitted elf companion Elfo (Nat Faxon), and her destructive "personal demon" Luci (Eric Andre). The entire first season is exclusively available on Netflix with the second currently in production and set for release sometime between 2020 and 2021. Plus, if you’re a fan of Groening’s other works, you may be able to spot some easter eggs and references on the show if you pay close attention!

Final Space follows astronaut Gary Goodspeed and his alien friend named Mooncake (both voiced by Olan Rogers) on their intergalactic adventures solving the mystery of “final space”—we’d tell you what it is, but even Gary and Mooncake aren’t sure. The series begins with Gary finishing a sentence in space prison when he meets Mooncake and the two embark on a quest to save the universe with a group of robots and a growing crew of shipmates. The show has a cool rotation of guest stars and recurring characters with voice actors like Conan O’Brien, Jane Lynch, John DiMaggio (who voices Bender on Futurama and Jake the Dog on Adventure Time), Tom Kenny (the voice of Spongebob Squarepants), and more. Humor-wise, this show is much tamer than most adult cartoons, but still with some sharp punchlines and deadpan cracks worth catching.

This animated series is a spin-off of the Canadian mockumentary series of the same name. It follows a group of residents—some of them ex-convicts—lliving in a trailer park. Fans of the mockumentary format on shows like American Vandal and Modern Family will enjoy it in animated form too—but this time, it's mixed in with some crime comedy and gallows humor. The main cast features an all-male ensemble voiced by creators John Paul Tremblay, Robb Wells, and Mike Smith, among others. The juvenile antics, silly schemes, clever punchlines, and good old-fashioned slapstick make this show a fun and light pick for some quick laughs while chilling on your couch.

F is for Family

Another iteration of the family-sitcom-gone-wrong, F is for Family is all about the Murphy family and their suburban life in 1970s America. Patriarch Frank (Bill Burr) plays the stereotypical quick-tempered, war veteran father who just wants to relax after work in front of the TV with a cold one. You’ll be entertained watching the grumpy old dad deal with his wacky family including wife Sue (Laura Dern), sons, Kevin (Justin Long) and Bill (Haley Reinhart), and daughter Maureen (Debi Derryberry). Though following in the footsteps of shows like The Simpsons, Family Guy, and American Dad, this dysfunctional sitcom is a little more cynical in tone than its predecessors, but still fun to laugh at if you enjoy old-school references, foul-mouthed jokes, and making fun of boomers.

Rick And Morty Disenchantment Trailer Park Boys The Midnight Gospel Bojack Horseman F Is For Family Big Mouth Tuca And Berties Final Space Archer Cartoons Adult Cartoons Entertainment Netflix Savvy Adventurer Guide Evergreen Streaming Streaming Services
Your Guide to Thriving in This Strange New World
Staying
In? What to watch, what to eat, and where to shop from home
OR
Heading
Out? What you need to know to stay safe when heading out