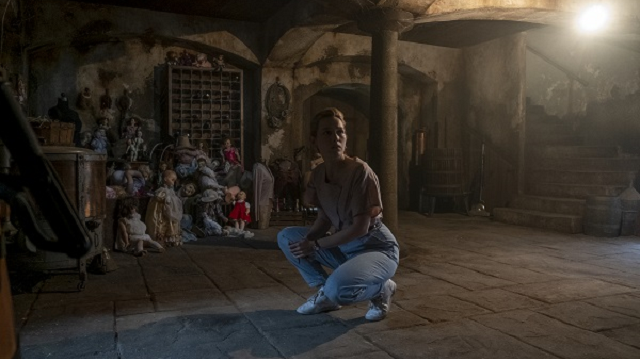 (SPOT.ph) Prepare to enter another horror house in The Haunting anthology's much-awaited second installment: Bly Manor. Yup, creator Mike Flanagan is back with another epic horror story! We know you're probably still reeling from the story of the Crain family and the truly messed up Hill House, but you best get ready for another wild ride with The Haunting of Bly Manor. This follow-up is landing on Netflix on October 9, just in time for the spooky season.

Isolated English countryside manor? Yup. A hefty amount of creepy dolls? Definitely. A strange cast of characters, complete with two children? You know it. Ominous figure in a strange body of water? But of course.

The Haunting of Bly Manor is set in the '80s. It follows the story of an American au pair (think governess, but less old-timey) who comes to the old estate to take care of two orphaned children. Her employer, the kids' uncle, has told her not to bother him unless something drastic happens—a clear red flag, TBH—and, naturally, things soon begin to unravel at Bly Manor in the most unnatural way.

The Haunting is taking horror on a different path with Bly Manor. As Hill House was inspired by American author Shirley Jackson's works, so was Bly Manor by Henry James' works—mainly the popular gothic novella The Turn of the Screw. "What sets Bly Manor apart is that at its heart, it's a love story. It's a gothic romance story," said Flanagan in a featurette for the show.

"Though Haunting of Hill House is about a very tight family, Bly Manor is about strangers, a family that is created. All of the people that inhabit Bly Manor come from completely different backgrounds and get to know each other through friendship, tension, conflict, and love," added Flanagan.

And riding on the expectations audiences have based on the first mini-series, this change of story is set to prove itself the right choice. "There's a lot of pressure going into another season, especially with a show that has been so succesful; when we're doing so many risks in terms of where the story is going, reimagining every aspect of it, pretty much," says Pedretti in a roundtable interview with SPOT.ph.

The Turning of the Screw is a mix of horror and gothic fiction that has continued to be a topic of discussion since it was published in 1898—a genre-bending effect Bly Manor hopes to emulate. But leaning more towards a gothic romance, which, as Flanagan pointed out, is often "seeped in mystery and doom," so you're sure to expect plenty in this retelling.

For Pedretti, her character in Bly Manor becomes a focal part of this overarching romance. And when asked if there's one major love lesson she has learned, she shares, "Don't compromise yourself," which also reflects majorly on Dani's experiences. We can't say much more about the romance aspect yet, so you'll have to wait to find that one out!

"Similar to The Haunting of Hill House, I really wanted to play more with ghosts as an expression of emotional wounds that we do carry around—how the past and present can echo each other, that moments don't fall like dominoes, they fall like confetti," said Flanagan. And in Bly Manor, the ghosts do blur between being in a characters mind and being truly real.

"It's probably more real for a lot of people," says Thomas in the interview, about these "emotional wounds." "We have our pasts, and we have ghosts from these pasts," he shares. "Whether severe or just minor, it doesnt matter, they stay with you and I think this is just a study in what those could be if they were to manifest, perhaps."

And yes, you will get to see the E.T. star play an all-grown up British gentleman.  "As an American, you don't get to play a Brit very often, in my experience," laughs Thomas about his role as the children's uncle and legal owner of Bly Manor.

"Hill House was kind of all f*cked up and broken, you know," muses Pedretti cheekily. Bly Manor, in contrast, takes on a more personal route, mixing our own inner terrors with gothic fiction—and succeeding to be all the more horrifying.

Adventurer Savvy Seasoned Horror Netflix Victoria Pedretti Henry Thomas Streaming Services The Haunting Of Hill House The Haunting Of Bly Manor Greener
Your Guide to Thriving in This Strange New World
Staying
In? What to watch, what to eat, and where to shop from home
OR
Heading
Out? What you need to know to stay safe when heading out