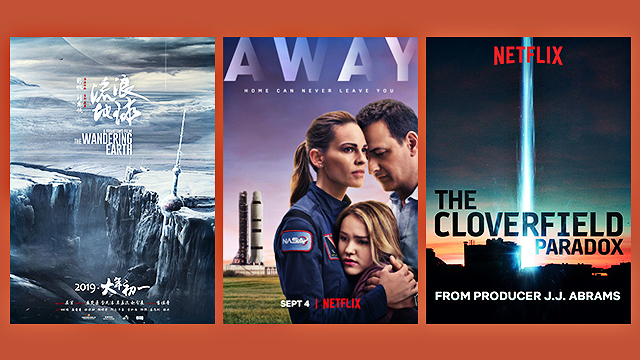 We just want to escape sometimes.

(SPOT.ph) No matter how vast the universe is, Earth is the only planet that humans can call home. It has everything we need: oxygen, water, the right amount of sunlight, and, of course, fellow people. But no matter how much we love living here, it can be overwhelming at times especially with the COVID-19 pandemic, forest fires, melting of the ice caps, unbearable weather changes—all our doing, obviously.

And while we can’t escape just yet (unless you’re an astronaut on a mission at the International Space Station), there are a number of sci-fi movies and shows that can bring us imagined stories of living in outer space. These shows and films don’t promise that it’s better out there of course, but the otherworldly setting makes all the difference.

Here are series and movies to watch on Netflix if you’re getting tired of Earth:

Two-time Academy Award winner Hilary Swank stars NASA astronaut Emma Green, who is on a mission to bring herself and her crew of four to Mars aboard the ship Atlas. But the trip is far from smooth sailing as she faces tension with her team, plus the fact that she has her family back on Earth to worry about. Away's 10-episode first season dropped on Netflix on September 4.

Set 372 miles above Earth, Gravity follows the story of Dr. Ryan Stone (Sandra Bullock) who tries to survive her first space mission. But without the comforts of good ol' gravity, a simple walk in outer space sure isn't easy. This Alfonso Cuarón flick also stars George Clooney as a veteran astronaut on his last flight before retirement.

The Space Between Us goes the opposite route: It is all about traveling to Earth for the first time rather than getting out of it. Gardner Elliot (Asa Butterfield of Sex Education fame) is a 16-year-old boy born on Mars. Turns out, her mother didn't know that she's pregnant and she goes on labor inside their space hub. He is raised on the red planet, and finds a way to be sent to Earth.

Chinese sci-fi The Wandering Earth is based on the novella of the same name by Liu Cixin. It fast forwards to the year 2016 when the Sun is about to transform into a red giant—and completely engulf Earth as it expands. The mission to transfer the planet from the solar system and to the Alpha Centauri system rests on a group of astronauts, who are tasked to build Earth Engines that will serve as planetary thrusters.

Spanish film Orbiter 9 follows Helena, a 20-something woman who grew up on the Orbiter 9 space station outside Earth—or so she thought. It touches on themes of deception, romantic relationships, and even the ethics of cloning. There is only one mission: to find a way to get out of the now-toxic Earth and reach a habitable planet called Celeste.

Captain Niko Breckinridge (Katee Sackhoff) leads a mission in outer space to find out why there's a Mobius strip-shaped flying object that landed on Earth. It's humanity's first contact with alien civilization, and they have to find a way to win an interstellar war and save their home planet. Another Life dropped its 10-episode first season on Netflix on July 25, 2019, and is expected to return for a second season following a renewal in October 2019.

With a combination of horror and science fiction, television series Nightflyers keeps the audience on their feet with its story set in 2093. Based on a novel of the same name by George R. R. Martin, the story follows a team of experts who are tasked to make contact with aliens. But strange things happen not only in their ship called the Nightflyer, but also with the way they relate to each other. Nightflyers' first and only season ran from December 2 to 13, 2018 with 10 episodes.

If the Robinson family in the 1812 novel The Swiss Family Robinson is off on an adventure after getting shipwrecked in the East Indies, the Robinson family in Lost in Space veered off-course during their space travel. They are aboard the Resolute—which is on its way to Alpha Centauri—to colonize a new planetary system along with other selected families But an alien robot hacks into their mothership, causing them to crash on a nearby planet. The series premiered on April 13, 2018, and is scheduled for a third and final season in 2021.

Cult favorite 2001: A Space Odyssey, directed by Stanley Kubrick and co-written by Arthur C. Clarke, is set in the U.S. spacecraft Discovery One that's on its way to Jupiter. Aboard the ship is Dr. David Bowman and Dr. Frank Pool, plus three other scientists in suspended animation. Problems arise when HAL, a human-like computer, decides to take over in a classic man-versus-machine conflict.

Netflix Tv Series Movies Films Science Fiction Sci-fi Streaming Roundup Adventurer Savvy Seasoned Greener
Your Guide to Thriving in This Strange New World
Staying
In? What to watch, what to eat, and where to shop from home
OR
Heading
Out? What you need to know to stay safe when heading out