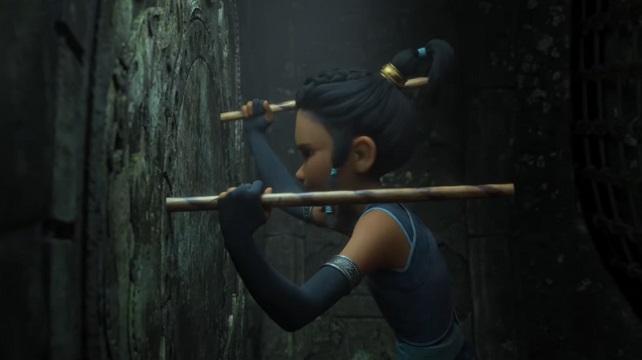 The Teaser for Disney's Raya Is Here and Wait...Are Those Arnis Sticks?

Raya is the first ever Disney film inspired by Southeast Asian culture!

(SPOT.ph) Most people wish they could be a Disney princess—or at least, be represented by them. To see yourself in the magical characters and worlds created by the animation powerhouse would be something else so it makes sense that the Southeast Asian crowd is all eyes on Raya and the Last Dragon, the first huge Disney animated film ever to be inspired by culture from our region! If you want to know where to level your expectations, then check out the first official teaser of the film below.

We know what you're thinking because we're thinking it too. This Disney heroine knows Arnis! Based on the teaser trailer, the young Raya is a fierce eskrima warrior—and who knows just how much better she is at wielding that sword that might just be a kris, too.

Raya and the Last Dragon is set in the fantasy world of Kumandra, where long ago, humans and dragons lived together in harmony—but everything changed when an evil force attacked and the dragons sacrificed themselves to save humanity (Yup, referencing another animation with great Southeast Asian influence!). Raya (voiced by Kelly Marie Tran of Star Wars fame) and her animal companion Tuk Tuk set off to find the legendary last dragon and restore order to the four nations—we mean, Kumandra.

The creators earlier stated that they wanted Raya to be an accurate representation of Southeast Asian culture. Filmmakers are taking inspiration from different countries, including Vietnam, Thailand, Laos, Cambodia, Malaysia, and yup, the Philippines!

Raya is currently slated to screen in U.S. theaters in March 2021. There's no word yet on how we can watch it in Southeast Asia but we'll be on the lookout for updates!