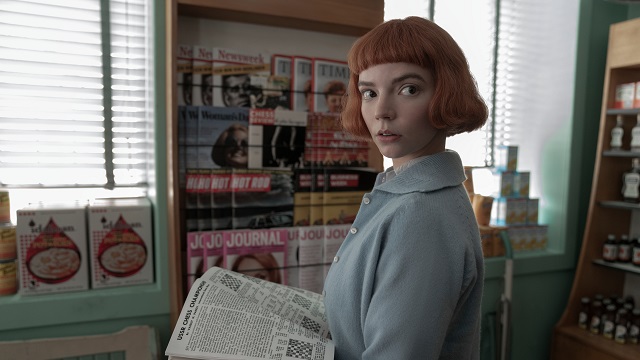 When Stephen King tells you to watch a show, you watch it.

(SPOT.ph) You might have seen super aesthetically pleasing stills from a new mini-series on your feed lately—and in case you're wondering if all this hype around the miniseries The Queen's Gambit is worth it, well we're here to assure you that it is. The series landed on Netflix on October 23 and it has finally made its way to the Top 10 list, currently at the seventh spot (Not a bad ranking, of course, but we feel like it deserves better). Best part? You don't even need to know how to play chess to enjoy this exquisitely made period drama. We list down everything you need to know about the show and why you really, really shouldn't sleep on it.

Here's the gist of The Queen's Gambit:

Set in mid-20th century U.S., the mini-series follows the story of Beth Harmon (Anya Taylor-Joy), an orphaned girl who turns out to be a chess prodigy. It begins with her childhood in an orphanage—where the girls' emotional traumas are "managed" via green tranquilizer pills, starting a lifetime of troubled dependency—to being adopted as a teenager and living in the typical American suburbia, and ultimately, her nearly destructive obsession with becoming grandmaster in a world dominated by men in suits.

Some may be tempted to call it a Mad Men-esque show, but the series treats the '50s and '60s setting in its own distinct way. The seven-episode series is based on a 1983 novel by Walter Tevis’ and was created by Allan Scott and writer-director Scott Frank. Fun fact: The Queen's Gambit is popular opening chess move that's used by the player to gain more control of the center board.

Here's where you've seen the cast of The Queen's Gambit before:

Remember the name: Anya Taylor-Joy. The 24-year-old American-born Argentine-British actress has been slowly gaining attention since she first appeared in Robert Eggers' 2015 horror film The Witch—and is making waves with her performance as the chess prodigy Beth Harmon.

We know you've seen her in Split, the M. Night Shyamalan psychological horror starring James McAvoy, where she played the clever and determined—if "broken"—Casey. She was also in another period drama, the British Peaky Blinders, as Gina Gray. Her latest big film was the bright and colorful 2020 remake of Jane Austen's Emma. Taylor-Joy took on the titular role, and is now arguably up there with Cher Horowitz (Alicia Silverstone) in the list of best Emma interpretations.

Benny (Thomas Brodie-Sangster) comes in later on as one of Beth's major competitors—and perhaps a friend, maybe even lover? We can't say, we can only hope. He is played by a mustachioed Brodi-Sangster whom you may or may not remember as the cheeky little Sam in Love, Actually. Remember the kid who chased the girl of his dreams through an airport? Yeah, that was him.

Brodie-Sangster was also in Nanny McPhee and Game of Thrones! He's been on our screens for practically all of his younger years so seeing him in Queen's Gambit is definitely a marker of what comes next.

And yes, another familiar face is in The Queen's Gambit! Henry Melling, who played Dudley Dursey in the unforgettable Harry Potter movies, plays Harry Beltik, another budding grandmaster who competes against Beth.

The reviews are in and even master horror author Stephen King put in a very good word for the series. The Queen's Gambit may sound like an intellectual trap folks on ivory towers usually gloat about—but the series delves way beyond the smart-people-being-smart aspect. It's the type of story you can believe in with characters to root for.

The Queen's Gambit doesn't fall into the easy not-like-other-girls trope with Harmon; she simply is unlike any other person in the series. The story fleshes out an entire world for us to live in, all outfitted in alluringly clean cinematography and with characters you're sure to fall in love with.