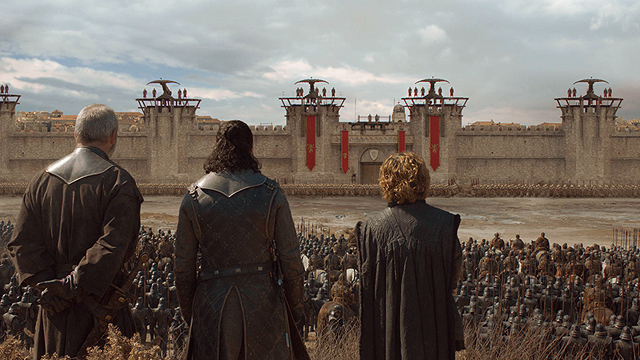 Top 10 Battles in Game of Thrones

a.k.a. The ones that stressed us out the most.

(SPOT.ph) It took years and years of patiently waiting for each episode to come out, but we've finally reached the finale HBO’s Game of Thrones. Arguably one of the best shows to have graced our screens (despite qualms about the last season), the show has delivered an intricate web of stories that showed us the growth of several beloved characters. Game of Thrones has also gained quite a reputation for giving us battles of epic proportions, and now that the show has finally come to an end, we looked back at some of the best battles of the series and ranked them according to their impact on the narrative, how well they were executed, and, of course, how involved we felt while watching each scene unfold.

Here are the top 10 most epic battles in Game of Thrones:

10. The Second Siege of Meereen in "Battle of the Bastards," Season 6, Episode 9

Unhappy with Daenerys Targaryen (Emilia Clarke) taking over Slaver’s Bay, the Slave Masters and the Sons of the Harpy stage a siege against Meereen. Thinking they have the upper hand, the Masters offer Daenerys a way out, saying they would let her return to Westeros. In return, they get to keep Missandei (Nathalie Emmanuel) and the Unsullied and kill the dragons (cue eye-roll). Daenerys immediately shows them how wrong they were as she rides Drogon with Rhaegal and Viserion, burning their fleets while Daario Naharis (Michiel Huisman) leads the Dothraki in a battle with the Sons of the Harpy on ground. The momentous victory establishes Dany’s power and serves as a prelude to the battles she’ll be facing—and most likely winning—once she sails across the Narrow Sea.

Undoubtedly belonging with the likes of Cersei Lannister (Lena Headey) and Ramsay Bolton (Iwan Rheon), Euron Greyjoy (Pilou Asbæk) reveals what a formidable foe he is as his fleet ambushes Yara’s (Gemma Whelan) navy at night. Dany’s newfound allies are caught in a naval battle as they sail the Narrow Sea. The fight is relatively short, but it isn't without spectacle. The dark water perfectly contrasts with the blaze from the burning ships, painting a fiery battle scene that makes us realize Cersei won’t go down without a fight.

Much to Jon Snow’s (Kit Harington) frustration (and ours as well), no one apart from his sworn allies believed in the looming threat of the White Walkers. Jon, along with the best fighters on his team, travel north to capture a wight to prove that they really do exist. They find themselves biting off more than they can chew when a horde of White Walkers arrive to ambush them—leaving them to seek refuge in a partially frozen lake. Trapped and surrounded by several animated corpses, things aren’t looking so good until Daenerys flies in with her three dragons. They manage to escape at the cost of Viserion, who is slain and reanimated by the Night King to join his undead army. It’s the episode that finally shifts the relationship between Dany and Jon.

In what might be the darkest episode of the series (and that's saying a lot), "The Bells" featured one of the most awaited battles of all time—the battle that would, ultimately, decide who gets to sit on the Iron Throne. As Daenerys and her army charge into King’s Landing, the battle, much to everyone’s surprise, is pretty much one-sided. But just when everyone thinks the incessant fighting is over, Daenerys does the one thing no one would have expected from her: torch thousands and thousands of innocent men, women, and children. The showrunners went all out to feature the chaos happening around the streets of King’s Landing, and it's definitely an episode to remember. Sadly, the last-minute twist didn’t feel earned. This would have ranked higher if it didn’t feel so out of place in the overall narrative of Game of Thrones.

6. Battle of Castle Black in "The Watchers on the Wall," Season 4, Episode 9

Some would say that the fourth season is Game of Thrones at its peak, and it culminated at the Battle of Castle Black. Outnumbered, the Night’s Watch has to find a way to defend the wall from an army of Wildlings. At this point, the Wildlings are still a long way from aligning themselves with Jon—and they attack to gain control of Castle Black. The siege results in Ygritte’s (Rose Leslie) death as she's shot by Olly (whose parents were killed by Wildlings) while aiming an arrow at her lover Jon. Fast-paced and thrilling, this battle effectively shows how much Jon and his friends had grown into men of the Night’s Watch, real brothers in combat.

5. Battle of Winterfell in "The Long Night," Season 8, Episode 3

There are mixed feelings about The Long Night, with some people saying it feels anticlimactic to see the long-awaited showdown between the living and the dead over so soon. Still, one can’t deny the fact that it’s Game of Thrones’ at its most spectacular. The battle lasts a whole (extended) episode, for one, and it’s complete with fire-breathing dragons soaring in and out of the commotion. The scenes were shot in the dark, making it all the more terrifying as we’re left guessing what’s happening half the time—which is probably what the characters are feeling as they fight against the biggest army of White Walkers that anyone has ever seen. One can’t deny that the sequence is well-crafted, featuring great shots shown at all the right cues, but as gripping as it is, this battle would have ranked even higher had the characters been making the obvious, reasonable decisions instead.

By the seventh season, we’d seen Dany’s dragons in action all over Essos, but we’d all been waiting to see how they would fare in an actual battle in Westeros. But full-grown dragons aside, what marks the Loot Train Battle as a memorable fight is that it’s between Dany and Jaime Lannister (Nicolas Coster-Waldau), both of whom have been central to the story since the first season. Two characters we feel strongly about are standing on the opposite side of a battlefield, leaving most of us confused over who we should be rooting for. Add the fact that the camera movement doesn’t follow a central character but instead shows us what’s happening through the eyes of nameless soldiers and warriors forced to fight to death in a war led by those in power, this battle is made remarkable by the fact that it doesn’t glorify fighting and instead zooms in on the horrors of it.

We were always told that the White Walkers are a big threat to humanity, and that certainly felt like an understatement at the Battle of Hardhome. Now the Lord Commander of the Night’s Watch, Jon travels north of the wall to Hardhome in an effort to convince the Free Folk to join forces with them in preparation of the long night. We hear the White Walkers before we even see them marching to Hardhome amd feel the dread the characters felt as they try to flee, panic causing disarray among everyone.

The Night’s Watch and the Free Folk are fighting a losing battle and the horrors of it are captured and shown in a fast-paced sequence of gore and destruction. Jon puts everyone else before him and stays to fight, but as more and more White Walkers join the fray, there’s nothing much they can do but retreat and hope for the best. They sail away and see everyone who died from the massacre rise to join the Night King’s terrifying army.

Up until this episode, all major battles of the show had to be shown…creatively, due to budget constraints—only the aftermath of the battles were shown. But as the series claimed its throne as one of the greatest shows ever, the producers decided it’s worth more than just the aftermath and brought us the Battle of Blackwater Bay.

Stannis Baratheon (Stephen Dillain) is ready to take the throne by force, bringing with him a massive fleet, and the battle would have been one-sided if it hadn’t been for Tyrion Lannister (Peter Dinklage) and his clever planning. It’s the battle where we see one of the smartest characters in the show—one who was always deemed to be useless in battle—show everyone that the mind might just be the sharpest weapon to exist. Stannis loses many of his men before they even reach land, leading to an unlikely victory for the Lannisters. Oh, and it gets plus points for effectively showing Joffrey as the useless coward that he is.

The final face-off between Jon and Ramsay, arguably one of the darkest characters in the show, is a gripping battle that left us all holding our breaths up to the very last second. Right from the get-go, we already know the situation is doomed. Ramsay’s forces greatly outnumbers Jon’s merry band of wildlings and loyal men. It begins with Rickon’s (Art Parkinson) abrupt death, and before we're given a chance to recover from it, we're transported right into the battlefield as the characters jump into action. Archers let their arrows loose and men charge forward into the battle that would decide the fate of Winterfell. We see shots upon shots of men falling as arrows rain down from the sky and everyone slashed and hacked against each other. We see more and more bodies piling up as blood spills across the battlefield, thinning out Jon's small army.

The situation is looking dire for Jon as the Bolton soldiers encircle him and his men, leaving us looking for a miracle and hoping, against all odds, that he somehow pulls through. Turns out we were betting on the wrong Stark because Sansa (Sophie Turner) arrives with Littlefinger (Aidan Gillen) and the Knights of the Vale to turn the tides around. The hard-fought victory is one we’ll never quite forget. Filmed masterfully, with shots and music perfectly capturing how tense each moment is, the episode didn’t earn six Primetime Emmy Awards for nothing.