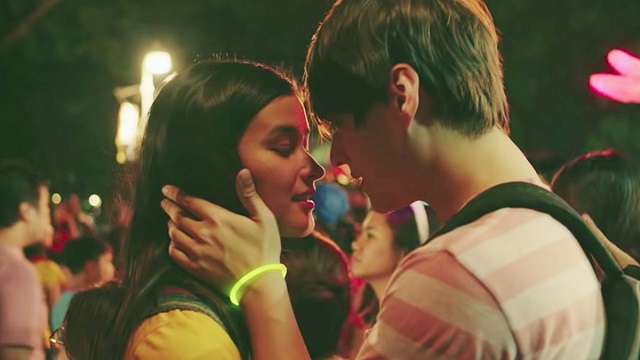 Yes, LizQuen Really Did Kiss at the UP Lantern Parade in Alone/Together

Liza Soberano explained how they low-key got Tin and Raf's first kiss on camera.

(SPOT.ph) Alone/Together has been on Netflix's Top 10 list since it landed on the streaming platform on November 5—and we totally understand why people are going crazy over this Liza Soberano and Enrique Gil film. If you're still not over LizQuen playing college students as the young Tin and Raf, pimples and all, we have a fun little tidbit about how they pulled off that kissing scene at the annual University of the Philippines Lantern Parade! Just be warned of minor spoilers ahead.

Get this, if you were at the 2018 Lantern Parade, then you may have been just a few steps away from where Soberano and Gil were shooting Tin and Raf's first kiss. Nope, it wasn't some sort of movie magic where they staged the entire event—the two basically went undercover at the actual parade. "We did something called guerilla shooting," explained Soberano in a PEP.ph article.

"We were doing it at the UP Lantern Parade so the people that were there were actually UP students and people watching the parade. They didn't know that it was us 'cause we were in disguise at first," continued the actress. "But then we had to take off the disguise and shoot so the people saw us doing the scene. Buti nga walang lumabas na teaser or anything."

She explained that there was no setup involved, just cameras and really good timing, we suppose. Can you imagine if LizQuen randomly popped up in front of you and kissed? We don't know how we'd react either so kudos to the folks in the shot who managed to practice extreme self-control. Even Soberano admitted it was "kinda awkward" but hey, the end result was arguably the sweetest kiss in the film so they definitely pulled it off!

Alone/Together was released in February 2019. LizQuen, along with director Antoinette Jadaone all flew off to New York City to shoot for the film in January of the same year—hard to imagine that just a few weeks before they were strolling the streets of the UP Diliman campus in character, too.

Adventurer Savvy Liza Soberano Enrique Gil Blacksheep Studios Antoinette Jadaone University Of The Philippines Netflix Streaming Services Staying In
Your Guide to Thriving in This Strange New World
Staying
In? What to watch, what to eat, and where to shop from home
OR
Heading
Out? What you need to know to stay safe when heading out