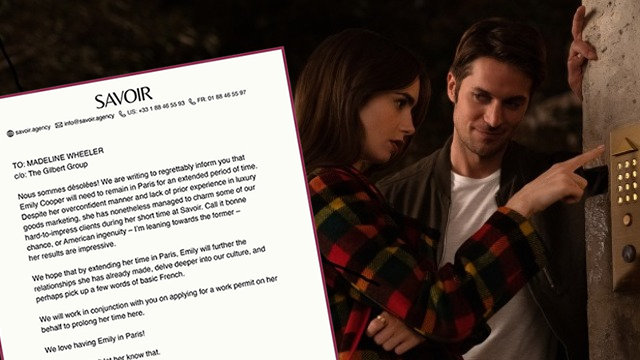 Oui, Netflix's Emily in Paris Will Return for Season 2

Plus, check out Sylvie Grateau's letter about what she thinks of Emily.

(SPOT.ph) Before it dropped on Netflix, we declared that Emily in Paris would be your next fun binge-watch. And the Lily Collins starrer went on to draw out a lot of polarizing feelings when it started streaming on October 2: some enjoyed Emily's adventures and the escapist vibe of the series, while others took it more seriously and questioned how realistic the show was. Well, it seems we'll be getting more Emily content that's bound to make people like or dislike it even more as the streaming platform announced Emily in Paris season two via an Instagram post.

In the "Deux is better than un" teaser, each star has a solo appearance and makes a reference to "deux" or "two." Some of them stay true to their characters; we see Gabriel (Lucas Bravo) whipping up two eggs (because he's that hot chef, remember?), Julien (Samuel Arnold) and Luc (Bruno Gouery) "form" an Eiffel tower with silly looks on their faces, and Emily (Collins) appears last, of course, with a dilemma that people who don't get replies would envy.

Plus, Sylvie Grateau (played by Philippine Leroy-Beaulieu) herself has issued a letter addressed to Emily's boss, Madeline Wheeler. Check it out below (and don't post it on social media, Emily might see it. LOL):

The first season introduced viewers to Collins' Emily Cooper, a young marketing executive from Chicago who moves to Paris to work for a French luxury marketing company. Once Emily sets foot in the City of Love, she comes across several challenges. At work, she has a hard time trying to fit in and getting her “American perspective” heard. Her personal life is even more colorful as she finds new friends and romantic prospects with Paris as the setting.