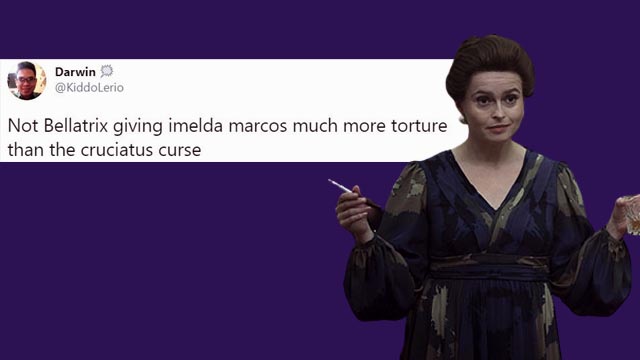 (SPOT.ph) In case you somehow missed it, the controversial former First Lady Imelda Marcos was mentioned in the latest season of The Crown. The series premiered across the globe on Netflix on November 15—which means that a huge number of people have probably heard the little anecdote about shells and shoes and the so-called iron butterfly shared by Helena Bonham Carter, as Princess Margaret, by now. If you aren't an avid watcher, here's the short clip making the rounds on Twitter.

Yup, it's an almost surreal moment. Bonham Carter is most popular for portraying the villainous Bellatrix Lestrange in the Harry Potter series—and seeing her talking about Marcos in this role is unexpected. Princess Margaret did visit the Philippines in April 1980, with the former First Lady playing host, of course. The princess was shown a collection of sea shells when she visited the Malacañan Palace.

The fictional scene based on absolutely non-fictional history naturally made waves on the local Twitterverse—with some celebrating what they take as a top-quality shade on the glamorous half of the "conjugal dictatorship" and others questioning why the scene deserves the limelight. Others thought of adding some historical "fun facts" while there are those who resorted to memes. Check out some of the fiercest and funniest tweets we saw below.

We could hear Teddie Salazar's voice.

Around 3,000 pairs is the popularly quoted number.

One thing we can all agree on: Princess Diana deserved better.

That delivery was something else.