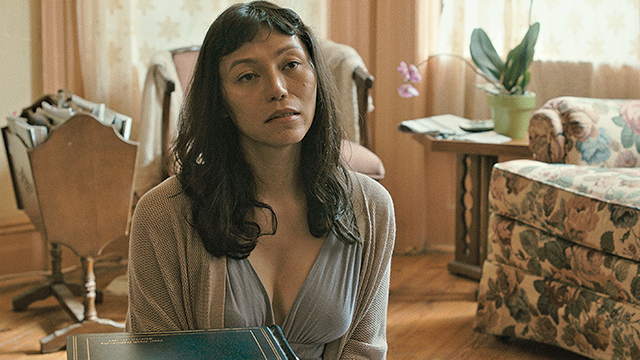 We talk to Isabel Sandoval about Lingua Franca.

(SPOT.ph) A Pinay trans woman trying to piece together her life in Brooklyn at the height of Trump’s anti-immigration campaign. This is the tumultuous story at the core of Lingua Franca—yet despite deeply uncertain undercurrents, the movie plays out softly, quietly, almost like a dream, thanks to the light touch of Isabel Sandoval, the New York City-based filmmaker who wrote, directed, and starred in the film.

Needless to say, this is not the type of movie that gets blockbuster status, but as Lingua Franca finally streams to Pinoy audiences through TBA Studios’ digital platform, Cinema ’76 @ Home starting November 20, it may just find a new home in the hearts of those starved for this kind of narrative—and even others who don't think themselves capable of understanding such a tale.

Olivia (Sandoval) is a trans Filipina working in the Russian-Jewish neighborhood of Brighton Beach, Brooklyn. She is a caregiver for Olga (the late Lynn Cohen), an elderly woman stuck in the beginning stages of dementia. Their days are routine, at first, with a silence broken by Olivia’s mother in the Philippines calling every so often to ask when her daughter will next send an allowance—that is, until Olga’s grandson Alex (Eamon Farren) comes to live with them.

Meanwhile, the undocumented Olivia watches as her friend, a trans woman named Trixie (Ivory Aquino), falls in love with and marries an American man, securing her green card. And when the man Olivia has paid to marry for her own green card backs out of their agreement, Olivia finds herself more and more drawn to the possibility of Alex—all the while battling all other possibilities regarding her status as an undocumented trans woman immigrant.

Sandoval herself has said that the film is not autobiographical, but having lived for more than a decade in the U.S., it is undeniable that the story takes heavily from her own experience. “As I was undergoing [my transition], I came up with the idea for Lingua Franca,” she tells the media during a press conference. The film was originally meant to be a straightforward romance between Olivia and Alex when she first began writing—until 2016 hit and Donald Trump became president of the United States.

“I was feeling a lot of apprehensions, anxiety, and vulnerability about my situation as an immigrant in the U.S.,” she says. “It was during that time when the final premise of Lingua Franca kicked into place. Olivia is, now more specifically, not just an immigrant but an undocumented immigrant who’s trying to look for a path to citizenship during a time of escalating arrests and deportations,” Sandoval explains.

Yet despite the almost violent origins of Olivia’s story, Lingua Franca instead takes you on a soft journey through isolation and uncertainty. This is not the type of movie that tells you what it is you should be feeling at any given moment; there are no forced visual or aural cues when to cry, gasp, swear, or laugh. Instead, it all comes naturally. Sandoval’s film takes you into a purely emotional world, from lonely frames of Olivia at a train station, a jumpy camera following the unsure Alex, the intimate, rather than invasive, love scenes, and all the poignant times we see the two communicate in English, their only common language.

As Sandoval explains, this dreamlike and highly personal style was very much on purpose. “Not only am I a woman of a minority group, a woman of color, I am also trans and an immigrant. It’s easy for us as artists and as story tellers to get pigeonholed.” But this was exactly what Sandoval wanted to go against with Lingua Franca. “I wanted to use that opportunity to tell a story that’s very personal, and unique, and distinctive, as a result, make a film that no one else can make.”

“I wanted Lingua Franca to feel impressionistic, in that it places you in the emotional and mental state of a character like Olivia,” explains Sandova. Indeed, it becomes easy to get lost in the quiet frames and poignant sequences of the film—not unlike Wong Kar Wai’s masterpieces. More than the soft touch, Sandoval adds that most films centering on a character like Olivia tend to feel clinical and detached. “I’m trying to subvert expectations among the audience of how a movie like this will turn out,” she points out.

This is perhaps where the strength of Lingua Franca lies, in its ability to draw audiences into the story of someone whose life may be as faraway as possible from their own. “No one has ever made them experience, in a way, what it’s like to be in the shoes of someone like Olivia,” states Sandoval.

Lingua Franca is like a dream you—or someone else—may have had once; You may not be able to recall specific details, but you know you will never shake off the way it made you feel.

The film premiered at the Venice International Film Festival in 2019 and has since raked up awards and accolades. Sandoval herself has been awarded Best Actress multiple times for her role as Olivia—her most recent win was at the 18th Pacific Meridian International Film Festival of Asian Pacific Countries in Vladivostok, Russia in October. Be sure not to miss Olivia's homecoming!

Lingua Franca screens on Cinema '76 @ Home starting November 20. You can access the film for P250 and will be available for four days. Just note that you will have 48 hours to finish it once you press play.

Adventurer Savvy Lingua Franca Indie Isabel Sandoval Tba Studios Cinema 76 Streaming Staying In
Your Guide to Thriving in This Strange New World
Staying
In? What to watch, what to eat, and where to shop from home
OR
Heading
Out? What you need to know to stay safe when heading out