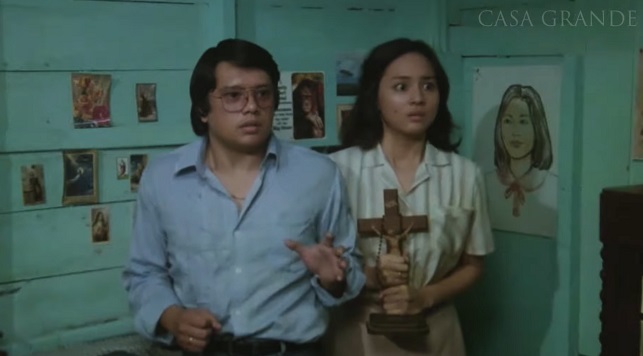 Mark your calendars for this classic Pinoy film.

(SPOT.ph) The line between fiction and reality is often blurred, and if you need a prime example of this fact, then look no further than the 1981 film Kisapmata. The restored version of this Pinoy classic is slated to stream online on Saturday, December 19, from 7 a.m. to 11 p.m., as announced on the Casa Grande Vintage Filipino Cinema Facebook page. Yup, the Mike De Leon film will be available online for a single day only so you best mark your calendars.

The film's restoration was done at L'Immagine Ritrovata, an Italy-based studio, and Wildsound Studios in Quezon City. The restored version first premiered in August at the Il Cinema Ritrovato Festival at Bologna, Italy and we finally get to see the tragic story play out in crisp HD on our own shores real soon.

If you're not sure what the context of this game-changing film is, we suggest you bring a lot of emotional fortitude to the digital screening. Directed by De Leon—known by younger generations for Citizen Jake (2018) and by film veterans for works such as Kakabakaba Ka Ba? (1980) and Sister Stella L. (1984)—Kisapmata was one of the first major movies to bring the issue of incest to the forefront.

It stars Vic Silayan as Dado Carandang, a menacing, retired police officer who is married to Dely (Charito Solis). The two have a daughter named Mila, as played by Charo Santos (yes, as in ABS-CBN's Charo Santos). At first glance, there is nothing remarkable about the trio but the tension-filled dynamics soon surfaces. Things ultimately go south after Mila finds out she is pregnant and marries Noel Manalansan (Jay Ilagan)—much to the anger of her obsessive and controlling father. The thriller gained critical acclaim in both local and global scenes, with Silayan's portrayal of a monster that is both deeply human and inhuman arguably yet to be matched in today's works.

The violent film was inspired by a true-to-life murder-scandal that happened in 1961, in which the bodies of Pablo Cabading, then a forensics detective at the Manila Police Department, his daughter, and his son-in-law were found at the Cabading's residence in 1074 Zapote Street in Makati. The gruesome murders are thought to have been perpetrated by Pablo, who then turned the gun on himself in a tragic murder-suicide.

While the scandal rocked Manila society back then, it was the way the tragedy was told by Nick Joaquin, as the Quijano de Manila, in his article, The House on Zapote Street that immortalized the story. Joaquin's article was included in his 1977 non-fiction crime anthology, Reportage on Crime, with 13 stories that covered events from the '60s and veered away from the typical straight-news style typical of crime reporting.

The restoration was funded by director De Leon together with UnionBank. Casa Grande Vintage Filipino Cinema is known for hosting online screamings of classic works; they streamed A Portrait of the Artist as Filipino by Lamberto V. Avellana earlier this November through De Leon's Vimeo account, "Citizen Jake." You can stream countless other Filipino classics on the Citizen Jake account, just be sure not to miss the special screening of the restored Kisapmata!

Adventurer Savvy Seasoned Streaming Mike De Leon Filipino Staying In Streaming Services
Your Guide to Thriving in This Strange New World
Staying
In? What to watch, what to eat, and where to shop from home
OR
Heading
Out? What you need to know to stay safe when heading out