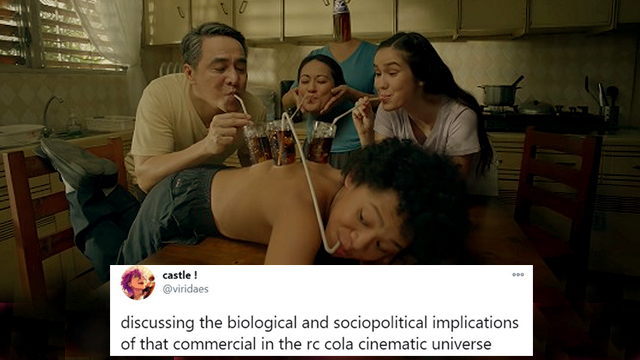 Finally: We Have Answers From the Team Behind That RC Cola Commercial

Plus, check out the Internet's hottest takes.

(SPOT.ph) Make it make sense. No, we're not talking about the general state of the world—though that is high up on the list—we're talking about the crazy commercial RC Cola Philippines just dropped on us innocent bystanders. We know you've seen the absolute wack video by now and are just as scarred, we mean, confused as we are. In case you need a refresher, or just need to confirm what you saw, check out the video below.

Clearly nobody expected this kind of content from a decades-old brand of drinks your grandparents probably used to enjoy—but a step is a step is a step. The commercial is arguably the buzziest topic on the Internet right now and everybody wants answers! Thankfully, the team behind the ad, a.k.a. the folks over at GIGIL, the agency co-founded by musician Herbert Hernandez (guitarist of OPM bands Moonstar88 and 6cyclemind), have deigned to explain themselves—make of their answers what you will.

What was the point?

Long answer: The agency wanted the ad to resonate with the Gen Z crowd—which meant tapping into that super niche but also super random (and often dark) sense of humor the Internet has cultivated. The super straight-to-the-point way of thought they wanted to drill into people's minds is "RC is my brand because it is cool, and I am cool."

So if you're wracking your brain cells trying to make sense of that commercial, well, prepare to be disappointed. "Basta! Wala lang!" is at the core of the ad, according to a totally official statement from GIGIL, we promise you. Gen Z kids live in the moment, explained the agency. "They don't need a list of reasons before doing something." And that logic extends itself to the ad. "Our film doesn’t need to be taken seriously," they wrote.

With "Basta!" at the center of their campaign, the very liquid statement gives them "freedom to explore different things our target market is into, and many things that are humorous."

How the hell did you guys pitch this?

Interestingly enough, the final ad was one of three ideas they presented. "Clients liked it the first time they saw it!" As Gigil explained, they wanted to create an image for the brand that would appeal to the young ones while also standing out—which we can safely say that for the last one, they've achieved. The client agreed with them on what the brand needs now and the rest, as they say, is history.

The team started working on the commercial towards the end of 2019 and finished filming right before the quarantine started. The release of the commercial was pushed back a bit, which gave them more time to work on it, "making sure that it won’t look gross." For those wondering, they did not have problems seeking approval from the Ad Standards Council for this ad.

So while GIGIL has made it clear that "their film doesn’t need to be taken seriously," the free space of the Internet isn't about to stop talking at the commercial anytime soon. From folks trying to visualize what pitching the story was like to what it all means (Read: Basta!), check out the wackiest, and even the most serious, readings below. Make your theory profs proud!

We see it happening.

Sure this explanation is wholesome, but anyone else freak out at the thought of your mom actually being a softdrink?

One sure thing about the commercial is that it got results.

Meanwhile, people have made good use of the larger space on Facebook. One user in particular dove really deep into the commercial.

On the other end of the spectrum, Filipino author and activist Ninotchka Rosca had a simple appeal to the brand. As all the people go crazy trying to make sense of the commercial, she drops some sage advice.

Adventurer Savvy Seasoned Gigil Commercial Humor Twitter Explainer Trending
Your Guide to Thriving in This Strange New World
Staying
In? What to watch, what to eat, and where to shop from home
OR
Heading
Out? What you need to know to stay safe when heading out