Anya Taylor-Joy: How Chess Scenes Were Shot in The Queen's Gambit
Loading
Already a member? Log in
No account yet? Create Account
Spot.ph is your one-stop urban lifestyle guide to the best of Manila. 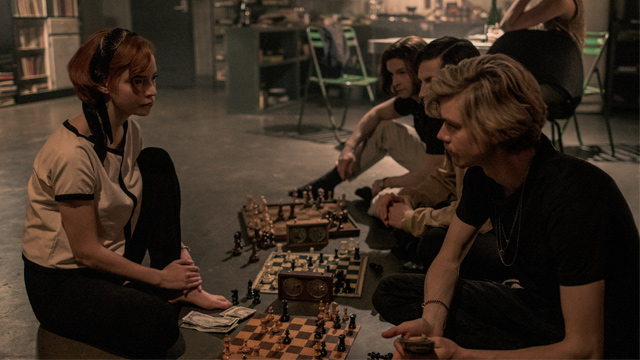 As with her other chess scenes, no biggie.

(SPOT.ph) The Queen’s Gambit has gotten a lot of buzz in the past few weeks—and rightfully so. The show made headlines recently for breaking Netflix’s viewership record as the most-watched scripted limited series, with a whopping 62 million households tuning in during the first 28 days that the period drama was on the streaming platform.

The series, which is based on a 1983 Walter Tevis novel, is a must-watch for various reasons: There’s the engaging manner in which chess is tied to the story, as well as the coming-of-age and empowerment themes woven into the narrative, leaving you pondering long after the credits roll. It doesn’t hurt that viewers are in for a treat with the show’s stunning production design, stylish clothes, and chess sequences, which are incredibly captivating even for people who haven't the vaguest idea how the game works.

Of course, we have to give credit to Anya Taylor-Joy’s portrayal of the enigmatic yet troubled chess prodigy Beth Harmon, who tries to get past her personal struggles while keeping her eyes on the prize. Taylor-Joy’s Beth is as intense as can be, but she takes it to a whole new level when she flexes her chess skills. Case in point: The speed-chess scenes, which makes for content that we’d be willing to watch countless times. It happens to be one of Taylor-Joy’s favorite The Queen’s Gambit moments. She talked about the scene with SPOT.ph, alongside other members of the press in a roundtable interview. “I loved it,” she exclaims. “It was like problem solving, or seeing how quickly you can complete choreography.”

And so Taylor-Joy, who had to learn chess for the role, was handed a “huge book that had 350 or plus games,” she shares. “I started to learn them and I showed up on the first day...and then they changed the game, and I was like ‘absolutely not, no way.’ The only way I'm going to manage to do this show is if I learn each match five minutes beforehand.”

Here comes the even-more-impressive part: “So I learned the speed chess on three different boards five minutes before we did it,” Taylor-Joy shares. “And that was such an interesting way to challenge your brain and the feeling after the first take where we got it right, was probably one of the proudest moments I've ever had on set.”

It seemed effortless for Taylor-Joy to play Beth Harmon, who admits that she didn’t really prepare that much for the role—she basically showed a side of herself through her character. “Beth is definitely a voice I've had in the back of my head for a long time,” she says. “From the first second I read the book, I didn't really have to do a lot of preparation in terms of finding the character. She was just there.”

We also pointed out how independent her character Beth seems for a story set in the '60s, so we asked Taylor-Joy what the women of today could pick up from Beth in particular. “It's not even just women but I think, specifically, it applies to women,” she starts, an explanation that serves as the perfect preface for her answer.

“People love to put other people in a box, and they're not comfortable if you are in any way outside of that,” she says. “And it's more enjoyable if we go through life embracing everybody's weirdness and embracing the fact that, you know, for instance, someone loves chess and loves nice clothes and loves to travel and has a bit of a thing for boys…”

“It's more important to accept yourself as a whole individual rather than attempting to fit yourself into a box that would make other people more comfortable,” Taylor-Joy concludes. Now how’s that for a real queenly answer?

The Queen’s Gambit is now streaming on Netflix. Photos courtesy of Netflix.

Adventurer Savvy Seasoned Anya Taylor-joy Netflix The Queen's Gambit Staying In Streaming Services Greener
Your Guide to Thriving in This Strange New World
Staying
In? What to watch, what to eat, and where to shop from home
OR
Heading
Out? What you need to know to stay safe when heading out