Pike Talks About Best Ending of I Care A Lot on Netflix
Loading
Already a member? Log in
No account yet? Create Account
Spot.ph is your one-stop urban lifestyle guide to the best of Manila. 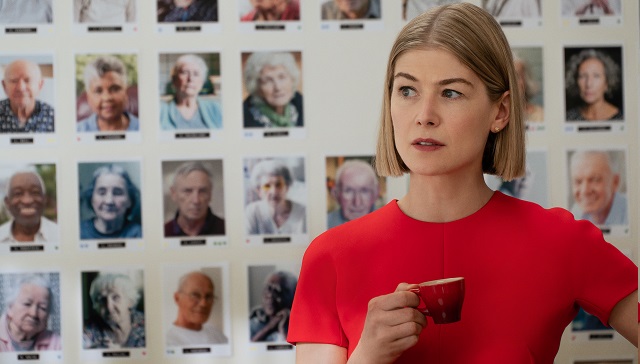 (SPOT.ph) Rosamund Pike is back at it with another character that we really shouldn't admire but still totally do. Con thriller I Care a Lot dropped on Netflix over the weekend and already the black comedy-esque flick is at the top spot of trending titles in the Philippines. The wild ride is enough to almost, just almost, make us forget Amy Dunne, Pike's OG erm, incredibly driven and tenacious character from Gone Girl (2014). Don't believe us? Check out the trailer below.

Here, Pike plays Marla Grayson, a legal guardian who has found a way to make the most out of her "occupation." In other words, wrangling her way to become legal guardian of the elderly—because she cares, supposedly—and then taking charge of all their assets. She sets her sights on one particular old lady, a harmless looking Jennifer Peterson (Dianne Wiest), only it turns out she's gone way over her head with this mark. Enter Peter Dinklage as Roman, a very dangerous man.

The movie is wild from start to finish, somehow managing to climb up and up in tone and then ending with a completely unexpected bang. We'll keep things vague if you haven't been able to watch the J Blakeson film just yet, but Pike has dropped her own opinion on the ending and here's what she thinks.

"I love the ending of this film because it gives you everything," Pike told USA TODAY. Marla Grayson is of course the film's main anti-hero, and she's as despicable as it gets—but at the same time she makes you wonder, would I look that cool vaping, too? On one hand, you can relate to her drive to succeed and gape at her incredible will to fight, plus her mind is amazing, and on the other, you raise an eyebrow at her extreme methods. So the way it ends just rounds it all up in a neat little package.

"You sort of want to see Marla win," continued Pike. "In like a couple of years, this whole shady business is going to be washed clean and she's going to be a pillar of industry making hefty bequests to charitable organizations. She's going to be Saint Marla," the actor pointed out. Admit it or not, there's this little part of you that wants to see the villain win—and Grayson definitely comes close. "People like that get away with it all the time. That is how it goes. And then of course [the movie] doesn't let her get away with it."

And even if you're into this extreme karma storyline, the ending still "leaves a bittersweet taste in their mouth because we end with the most likable character in the movie screaming in despair," added Blakeson. Besides, the Grayson corporate empire will continue to exist either way, "You can chop the head off the hydra, but there's another one that will keep living." Between Pike's and Dinklage's performances, and whatever you feel about the wild story and that crazy retribution, I Care a Lot is definitely a film to put on your watch-list.

Adventurer Savvy Netflix Streaming Services I Care A Lot Rosamund Pike
Your Guide to Thriving in This Strange New World
Staying
In? What to watch, what to eat, and where to shop from home
OR
Heading
Out? What you need to know to stay safe when heading out