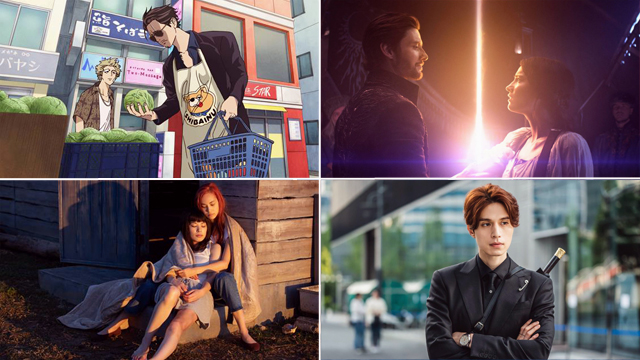 Welcome summer with these cool titles to binge-watch.

(SPOT.ph) The summer months are coming! And you know what that means: It's time to put the fan on high and plant your butt on the couch to cool down with some binge-worthy titles coming to Netflix this April. Forget popcorn; prep a cold drink or get a tub of ice cream for your next marathon.

Check out the most exciting titles coming to Netflix Philippines this April:

Why you should watch it: It's based on the story of Charles Sobhraj, a serial killer who preyed on backpackers along the "hippie trail" of Asia in the '70s. So think groovy period drama—but with lots of gore.

Why you should watch it: Idris Elba as an urban cowboy in Detroit trying to patch up his relationship with a teenage son? We're sold.

Tale of the Nine Tailed

Why you should watch it: An immortal morally ambigious gumiho (Read: nine-tailed fox spirit) spends centuries looking for the reincarnation of his long-lost love, only to find her again as a feisty TV producer.

Why you should watch it: A hard-shelled yakuza turned house-husband—while still being completely unable to let go of his old ways. His voice alone is enough to instill fear in the hearts of many and he's an expert at making bomb bento boxes for his wife.

Why you should watch it: Nothing to get your blood pumping like a well-executed gangster movie directed by Park Hoon Jung. Plus, why not a little ill-fated romance in the form of a gangster on the run bumping into a terminally ill woman?

Why you should watch it: Ever wonder what happened to childhood friends you drifted from? Well, Octavia Spencer and Melissa McCarthy play ex-besties who not only reunite, but take it upon themselves to become superheroes and fight the bad guys running rampant in their city.

Why you should watch it: Here's a question you're probably thinking right now. Is there still a chance to find love in the midst of an apocalypse? Join Joel Dawson (Dylan O'Brien) as he treks through a monster wasteland to find out.

Why you should watch it: Love makes you do crazy things sometimes—murder included, it seems. Kiko Mizuhara stars as Rei Nagasawa, who escapes with Nanae Shinoda (Honami Sato) after getting rid of the latter's abusive husband.

Why you should watch it: You've seen Ben Barnes play the unforgettable hero of fantasy adventure Narnia, now check him out as the villain in this adaptation of the popular YA series by Leigh Bardugo. We're so totally into this switch.

The Mitchells vs. The Machines

Why you should watch it: This wacky adventure film about a family battling the robot uprising comes from the same minds behind Spider-Man: Into The Spider-Verse and The LEGO Movie.

Adventurer Savvy Netflix Streaming Services Shadow And Bone The Serpent Concrete Cowboy Idris Elba Tale Of The Nine Tailed The Way Of The Househusband Night In Paradise Thunder Force Love And Monsters Ride Or Die Kiko Mizuhara Ben Barnes The Mitchells Vs The Machines Staying In Guide
Your Guide to Thriving in This Strange New World
Staying
In? What to watch, what to eat, and where to shop from home
OR
Heading
Out? What you need to know to stay safe when heading out