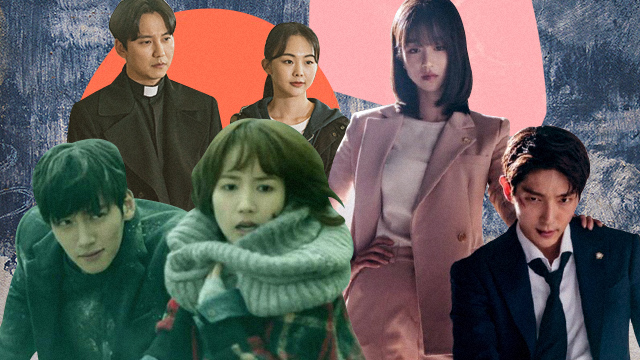 10 Cool Shows to Stream If You Liked Vincenzo

Can't get enough of badass guys in black suits?

(SPOT.ph) Men in black suits. No, not the MIB movies, nope, not Keanu Reeves’ characters in general either, we’re talking about the latest one to come crashing into our screens: Song Joong Ki as a Vincenzo Cassano, a mysterious badass lawyer with ties to the Italian mafia and a heart of gold. Vincenzo has everyone’s heart racing with a cool mix of good old vigilante action, dark humor, and even some romance. The weekly dropping of episodes probably has you itching for more content though, so while waiting for the next Vincenzo episode, why not give these series with similar vibes a chance?

Also read:
In This Dark Comedy, Song Joong Ki Is a Mafia Lawyer With an Anti-Hero Vibe
How the Vincenzo Team Pulled Off Those Scenes in Italy
10 Action-Packed South Korean Films to Watch If #Alive Got Your Heart Pumpin'
10 Action-Packed Korean Shows to Stream If You Need a Break From Rom-Coms

Feed your addiction with these 10 TV shows like Vincenzo:

Why you should watch it: Before Vincenzo, there was The Fiery Priest. Both were written by Park Jae Bum and feature a central character that looks really good in black—just note that in this one, he’s a priest with a shady past. Meet Kim Hae Il (Kim Nam Gil), a.k.a. the “hot-blooded priest.”

Why you should watch it: Park Hae Jin plays Kim Seol Woo, a black-suited character with a shady past—anyone else starting to see a pattern here?—who is hired by superstar Yeo Woon Gwang (Park Sung Woong) as a bodyguard. Except, of course, that Kim Seol Woo is simply using this post as a cover for his true mission as a black ops agent. More on the comedic side, but definitely not lacking any action.

Why you should watch it: If you want to go a bit darker (and steamier) than Vincenzo, head right on to The K2. Kim Je Ha (Ji Chang Wook) is an ex-mercenary on the run from his past. He ends up the bodyguard of a high profile businesswoman with political ties—but there’s a specific reason he chose this role.

Why you should watch it: Manager Kim (Namkoong Min) isn’t exactly the person you’d picture when someone says “fraud and embezzlement master” but that’s exactly why this lighter series works. Kim’s a good person who just happens to be on the wrong side of the law—just like Vincenzo—and they both use their smarts to get what they want. Plus, this series was also written by Park Jae Bum.

Why you should watch it: Right up the “bad guys with hearts of gold” alley is Bong Sang Pil (Lee Joon Gi), an ex-gangster turned lawyer who isn’t afraid to use his fists if needed to win a case. The series is set in a crime-ridden city where he carries out justice using loopholes in a more or less questionable manner—all while working towards ultimate vengeance for a past grievance.

Why you should watch it: Another legal series featuring strong-willed folks bending the law to their wants, this time centering on Jung Geum Ja (Kim Hye Soo), a ruthless lawyer who’d do anything to win a case for her ultra-rich clients, as long as the price is right. Enter Yoon Hee Jae (Ju Ji Hoon), an equally smart but ethically polar opposite lawyer. Don’t be fooled by the romance though, as the push-and-pull of the two mains is cleverly set in a gripping legal landscape.

Where to watch: Netflix, Viu

Why you should watch it: You know how Vincenzo is so clearly into Hong Cha Young (Jeon Yeo Been) but can’t admit it? That’s exactly the dynamic in this popular series featuring a literal Grim Reaper (Song Seung Heon) and Kang Ha Ram (Go Ara), a woman who can see death coming.

Why you should watch it: How about an ensemble cast of vigilantes this time? A mismatched group from shady pasts with sketchy moral compasses—a criminal for hire, a tabloid reporter, and a seasoned journalist—come together to uncover the truth behind a crime much bigger than they could have expected.

Why you should watch it: If you like characters who are the best at what they do, with a touch of ruthlessness, then check out Park Shin Hye in Sisyphus as an elite warrior from the future. It has that same blend of action, comedy, a bit of romance—with the added benefit of some sci-fi time-travelling.

Why you should watch it: Light humor and action always make for a good mix. In this one, the black-suit-guy is Kim Bon (So Ji Sub), an ex-spy who becomes entangled in the life of his neighbor, Go Ae Rin (Jung In Sun), after she loses her husband in what is definitely not natural circumstances.

Adventurer Savvy Netflix Viu K-drama Vincenzo Sisyphus Black Good Manager The Fiery Priest Man To Man The K2 Lawless Lawyer Hyena Healer My Secret Terrius Streaming Services Staying In
Your Guide to Thriving in This Strange New World
Staying
In? What to watch, what to eat, and where to shop from home
OR
Heading
Out? What you need to know to stay safe when heading out