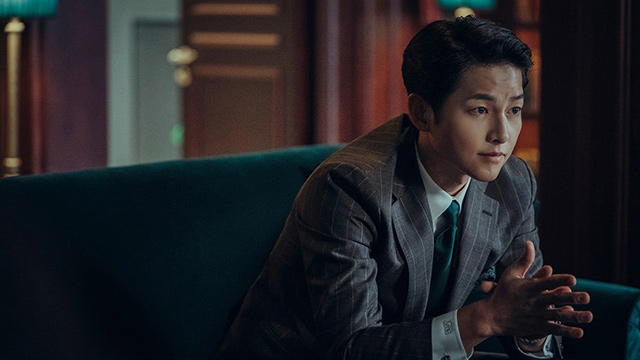 In This Dark Comedy, Song Joong Ki Is a Mafia Lawyer With an Anti-Hero Vibe

We can't deny that Vincenzo reminds us of Big Boss.

(SPOT.ph) It seems like Song Joong Ki is off to make 2021 his year with projects left and right. You might have seen him as the skilled pilot and former Space Guard Kim Tae Ho in the recent streaming hit Space Sweepers, and if you’re one of those people who can’t get enough of this oppa, you can catch him next in Vincenzo, a dark-comedy K-Drama which can also be streamed on Netflix starting February 20.

Vincenzo follows the life of Vincenzo Cassano (Joong Ki), lawyer for an Italian mafia. He ends up going to Korea and takes down villains by being villainous himself—living up to what he says in the teaser: “Only evil can punish evil.” The series is directed by Kim Hee Won (The Crowned Clown, Money Flower) and written by Park Jae Bum (The Wrath, Good Doctor).

Rounding out the main cast are Jeon Yeo Bin as Hong Cha Yeong, a lawyer who joins forces with Vincenzo to fight against the nefarious Babel Group, and Ok Taecyeon, a clumsy intern who is always looking to Cha Yeong for everything.

Curious about how Vincenzo on Netflix will play out? Here are more details about the show, straight from the Song Joong Ki and other stars:

Baddies pay the price—at least in this series.

“There's always evil people everywhere, unfortunately,” Joong Ki says during the roundtable conference with the APAC press. He relates this to watching the news, where some stories “make us so angry that it brings us almost to tears.” In Vincenzo, we’ll get to see a lot of villains, just like in real life. “I think that the way that the characters approached these villains and also the method and the concept of punishing evil was very satisfying for me, which is what drew me to the piece.” If you’ve had enough of baddies wreaking havoc on the world, this might just make Vincenzo a great watch for you.

The three leads are all lawyers.

“So all three of us play the role of a lawyer by occupation, but each of us has different characters,” explains Joong Ki. As consigliere of the Italian mafia, he is the legal adviser to a mob, which the actor compares to Tom, the character in The Godfather who works for Al Pacino’s character. From Italy, Vincenzo arrives in Korea and faces a slew of challenges.

Meanwhile, Yeo Bin’s Hong Cha Yeong is a lawyer from one of the most prestigious legal firms in Korea. “She's a character that is not driven by what is good or bad, but what is to her advantage or disadvantage.” On the other hand, we have Taecyeon, who plays the role of the naive Jang Jun Woo. “Some people who look at my character might think to themselves, ‘How in the world did this person pass the bar?’ so he's a very charming character as an intern lawyer of the firm.”

There are lines spoken in Italian.

“The big picture that the director wanted to portray was the differences that arise as Vincenzo comes to Korea,” Joong Ki explains. A lot of scenes and elements tried to incorporate “something that's uniquely Italian.” He reveals that he worked with an Italian tutor and studied Italian for the show.

Joong Ki was one of Yeo Bin’s favorite actors when she was still in school.

She also happens to be the very first person to be cast in the series. “At the time, I was not aware of who I would be working with, so when I heard these two names, I was extremely happy.” She shares that she previously had working experience with Taecyeon on Save Me together; as for Joong Ki, “he was one of my favorite actors while I was still in school. So it was really amazing to hear that I would be working alongside him and I had a lot of expectations.” Yeo Bin also shares that Joong Ki pays close attention to detail, and points out how she and Taecyeon have great chemistry from the get-go.”

He might be an awkward intern, but Taecyeon's Jun Woo wants to be “James Bond” to Yeo Bin's Cha Yeong.

Speaking of chemistry, Taecyeon’s character apparently wants to be ‘James Bond’ for the character Cha Yeong, in a sense that he wants Cha Yeong [to] feel like she can rely on Jun Woo when she needs to. “That's one of the reasons why he goes on to say that if she is having trouble, he would willingly be a spy for her,” he adds. We're curious to see how this plays out in the series.

Taecyeon is to vitamin and Joong Ki is to oxygen.

Yes, that’s according to Yeo Bin. “Taecyeon is more like a vitamin where he's the jokester and he's very funny on set. For Joong Ki, he's kind of like oxygen almost where he's just someone that's crucial and very necessary to all of us being there.” Joong Ki adds that Taecyeon was “definitely someone that made everybody laugh on set” and even spills: “I think he's actually trying to hold himself together because it's an interview currently, but when you really meet him on set, you will know just how fun and funny he is.”

There’s something within Joong Ki himself in every project—Vincenzo included.

We ask what side of Joong Ki we could expect in Vincenzo—or something he hasn’t shown yet in other movies and shows he’s starred in, to which he replies, “I don't think that you should be looking to discover anything new from me.” He continues, “What I mean by that is every time I approach a project or a character, I have to bring that from somewhere within myself. Whatever you get through my characters, it is at the end of the day, just me. That's what I meant.” Genre-wise, he says that his role in Vincenzo will be new and different. “I think the audience will get a kick out of how the very dark issues of society can be solved in a fun and lighthearted way.”

You can expect cliffhangers and fireworks in the series.

“Why is Vincenzo a must see? Because I'm in it!” Taecyeon says with a laugh. When it was her turn to speak, Yeo Bin went on to say the same thing: “I also have to say that I'm in it as well!” For Taecyeon, the series is full of cliffhangers, making it an exciting watch per episode. As for Yeo Bin, each episode felt like “there was this amazing firework show going on in an open plaza, and I had the honor to be invited to it. I feel like if we are putting on an amazing firework show and you don't come to the show, it's your loss.” Joong Ki doesn’t follow the way the two answered, focusing instead on how they’ve “created something that is just a straightforward comedy,” which is something a drama series in Korea hasn’t been done in a while.

Vincenzo starts streaming on Netflix February 20 at 10 p.m. with new episodes every Saturday and Sunday. Photos courtesy of Netflix.

Netflix Streaming Services Staying In Adventurer Savvy Korean Greener Movie Vincenzo Song Joong Ki
Your Guide to Thriving in This Strange New World
Staying
In? What to watch, what to eat, and where to shop from home
OR
Heading
Out? What you need to know to stay safe when heading out