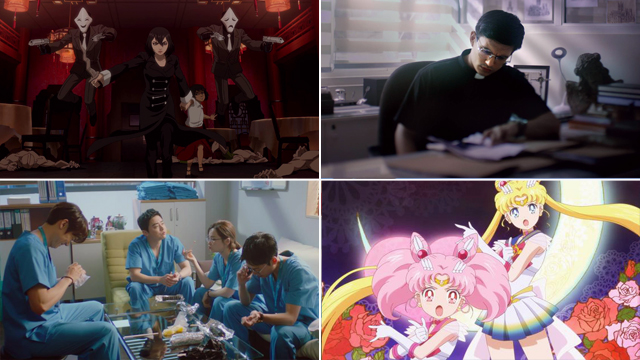 Trese, The Girl With a Gun, Hospital Playlist, and more!

(SPOT.ph) And just like that, we're halfway through 2021. Time's a blur and the anxiety is high but hey, we'll always have new stuff to stream. We totally get you if you need a new world to dive into once in a while so we're prepping you for next month's Netflix drop. For June 2021, we've got loads of Pinoy content, good old K-Dramas, U.S. productions, and more.

Put these 10 exciting titles on your Netflix Philippines watch-list this June 2021:

Reel in the second half of the year with this horror flick! A psychiatrist-turned-priest played by Tom Rodriguez is stumped by the case of a possessed teenager. This leads him to team up with a clairvoyant nun.

Oh yes, Sailor Moon is back! The Japanese franchise dropped the latest movie in this nostalgic universe early in 2021 and Netflix is bringing it to the rest of the world. Catch up with the gang as they face the mysterious, evil powers seeking to use an eclipse to their own advantage.

The Girl and the Gun

The acclaimed Babae at Baril is heading to the streaming platform! In Janine Guiterrez's FAMAS Best Actress role, she plays a department-store saleslady who one day finds a gun in her hands. Cue a hard-hitting story about settling old scores.

The apocalypse isn't what you'd expect in this fantastical tale. We see the end of the world through the eyes of an adorable, young, half-human and half-deer boy.

Finally! We've been waiting for the anime adaptation of Trese since the news first broke in 2018. Now we'll finally get to see supernatural detective Alexandrea Trese in action—with an epic voice cast to boot.

The gang is back for a second season! Hospital Playlist is one of those medial K-Dramas that had everyone hooked when it first dropped so we're sure a lot have been waiting to see what this tight-knit gang of medical professionals will be up to next.

This French mystery thriller is one of the most-watched non-English series on Netflix—and folks in the Philippines are arguably some of the biggest fans. Catch up with professional thief Assane Diop as he steals, gambles, fights, and cons his way to attain revenge.

Kevin Hart stars as a man who suddenly finds himself as a single father after the tragic death of his wife. We know Hart's presence may make you think it's a comedy but it looks like this is going to be the perfect dramatic Father's Day watch.

Oh yes, the King of the Monsters is back—and this time he's an anime. This new take on the kaiju king will center around a grad student and an engineer leading the fight to save the world. Plus, Studio Ghibli is involved.

Get raady for some intense American-brand humor. This tongue-in-cheek take on their history will feature a stellar voice cast that includes Channing Tatum as a chainsaw-wielding George Washington, plus Andy Samberg, Olivia Munn, Simon Pegg, and more.

Adventurer Savvy Seasoned Netflix Streaming Services Staying In
Your Guide to Thriving in This Strange New World
Staying
In? What to watch, what to eat, and where to shop from home
OR
Heading
Out? What you need to know to stay safe when heading out