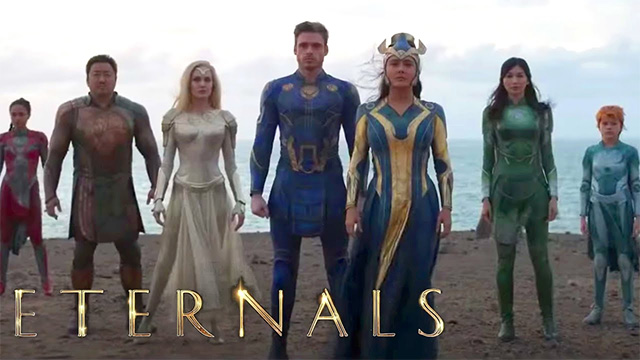 Marvel's Eternals Are Here. But Wait, Who Are They, Exactly?

We dive into the MCU's newest crew.

(SPOT.ph) So it turns out the Marvel Cinematic Universe has been hiding an entire group of divine beings here on Earth all along—and we finally get to meet them in the upcoming movie, Eternals. The first trailer featuring an epically diverse cast dropped in May. A final, way epic one dropped in August. With people freaking out, we give you the lowdown on what to expect: From deets on the movie to who the new characters are.

What is Marvel Studios' Eternals about?

The movie is set after the events of the Avengers: Endgame. With the OG superhero league indisposed, an immortal alien race called Eternals—who have apparently been living among humans for thousands of years—reunite to battle their evil counterparts, the Deviants.

Eternals is part of the Marvel Cinematic Universe (MCU) Phase Four and is directed by Oscar winner Chloé Zhao. The movie is set for a theatrical release in the U.S. on November 5, 2021—fingers crossed Disney decides to stream it for the rest of the world, too!

Who are Marvel's Eternals and where are they from?

The Eternals were first introduced by Jack Kirby in 1976. The OG Marvel comics traced the story of the the immortal Eternals and the war-crazy Deviants, both of which were created by a powerful alien race.

We saw 10 eternals, all of whom have cosmic powers, and one human (Kit Harington!) in the epic new trailer. Keep up with their characters below:

"This is OUR time," wrote the Mexican actor on her Instagram. Ajak is considered the spiritual leader of the gang.

Warrior and scholar Thena is known for being the "perfect" one among the Eternals so you can see why the acclaimed actor Angelina Jolie is an absolute fit. In the movie, the super powerful Thena and fellow Eternal Gilgamesh have a special bond formed throughout thousands of years. Also, fun fact: Thena and Thanos are first cousins. Think we'll be seeing more of the villain?

Remember Don Lee in Train to Busan? Yup, he's back in another global blockbuster, this time as the Eternal Gilgamesh. In the comics, Gilgamesh became an outcast because he took a little too well to his human disguise for the other Eternals' liking. He became known by many names throughout human history and myths, think Hercules, Beowulf, and of course, Gilgamesh, the epic hero of Ancient Mesopotamia.

Sersi the sorceress is arguably the Eternal who loves humans the most. Gemma Chan is taking on the lead role for Eternals—but this isn't even her first role in the MCU. Remember Minn-Erva in Captain Marvel?

The all-powerful Ikaris is the Eternals' tactical leader. In the comics, he lived amongst humans for some time as Ike Harris. Ikaris and Sersi appear to have a sort of thing between them, based on the movie trailer.

Kingo the Eternal originally became a samurai in the comics—then transitioned to working as a huge Japanese action star. The movie, and Nanjiani, looks like they're taking us the Bollywood route instead! No complaints here.

Don't be fooled. Sprite may look like she's 12 years old but she is no less younger—or less powerful—than the rest of the Eternals. Lucky for her though, her youthful looks match her trickster persona.

Engineer and inventor Phastos first appeared in the comics in 1985. He will be played by Brian Tyree Henry. Phastos is also breaking barriers as the first openly gay Marvel character.

The Eternal Makkari is constantly breaking the sound barrier due to her sonic speeds—leading her to become the MCU's first deaf hero. She will be played by deaf actor Lauren Ridloff whom you may remember from the ninth season of The Walking Dead.

The aloof loner and probable black sheep of the Eternals bunch is Druig. He is also Ikarus' cousin and one time KGB agent, according to the comics.

Sersi will be bringing us back to our GoT days as she becomes entangled in some romantic choices involving Ikarus and Dane Whitman (Harington). A non-Eternal, Whitman dons the mantle of the Black Night, originally his uncle's. What he doesn't know is that his uncle was a super villain.

UPDATED (August 19, 2021): This article was updated to include details from the final trailer of Marvel's Eternals.