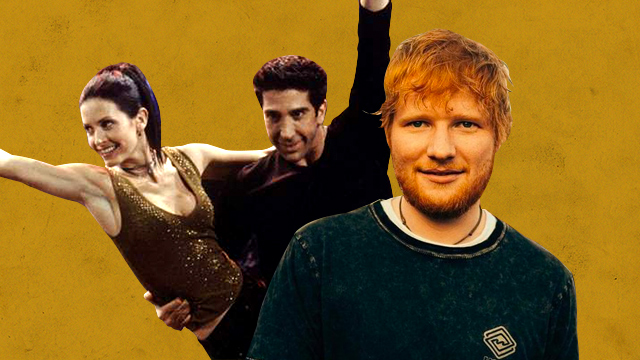 Where the heck was David Schwimmer? Not that we're complaining, really.

(SPOT.ph) Look, the Friends nostalgia has been on overdrive ever since the much-awaited reunion special finally dropped on May 27—and Courteney Cox is giving us way more fuel than we deserve. She just dropped a short clip of her and Ed Sheeran recreating that dance scene from season six episode "The One With The Routine." Yup, as in that hilarious sibling dance originally done by the competitive Geller duo, Monica and Ross (David Schwimmer).

First, a refresher. In case you haven't recently rewatched the OG sitcom about friends for the nth time recently, "The Routine" is what the Geller sibs called the childhood dance they used to perform. Somewhere along they way, they had this misguided idea that the dance is actually cool enough to get them on TV—resulting in two fully-drown adults giving it their all on the dance floor. We still can't get over their game faces.

And now around 20 years after this first episode aired in 1999, Cox decided to make it clear that she still has the moves—and she even got Ed Sheeran to play the part of Ross. She posted the short clip of them grooving it out on a large field to Instagram on May 31, Philippine time, a few days after the reunion first dropped on streaming.

"Just some routine dancing with a friend," Cox captioned the adorable clip. We don't know how this happened but we are all for the actress and Grammy-award winning musician's dance moves. Cox even counts them down the way Monica would have. Then it all goes really well until that last epic bit! In need of a bright spot? Here you go:

Adventurer Savvy Seasoned Friends Nostalgia Courteney Cox Staying In Heading Out Ed Sheeran
Your Guide to Thriving in This Strange New World
Staying
In? What to watch, what to eat, and where to shop from home
OR
Heading
Out? What you need to know to stay safe when heading out