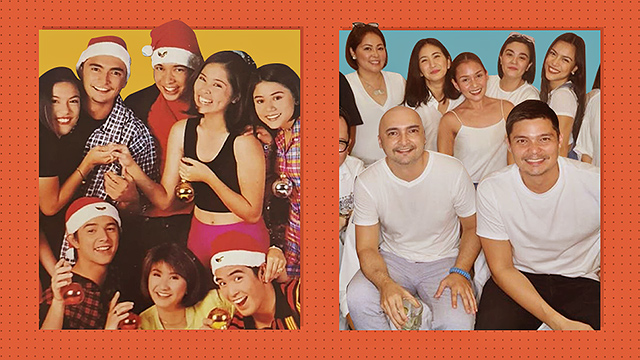 Remember when Wacks and Peachy were the number one couple on TV?

(SPOT.ph) Forget Fridays; at one point in your life, it was all about Thank God It’s Sabado—as in the ‘90s youth-oriented show on GMA once had everyone hooked. T.G.I.S. was what all the teens tuned into Saturday night, watching their lives mirrored—albeit a little more fashionably—by Joaquin “Wacks” Torres III (Bobby Andrews) and Peachy Real (Angelu de Leon) and their friends, then as the show continued on successfully, more and more characters (and actors!) would come in.

T.G.I.S. aired from 1995 to 1999. It was probably where you first saw your teenage celebrity crush—think Andrews, De Leon, and even Anne Curtis and Dingdong Dantes. So in case you need a refresher, we take a walk down memory lane and check out where the first T.G.I.S. batch—and a few more from the next ones—are now. Alexa, play “Walking on Sunshine” by Katrina and the Waves.

Angelu de Leon already had a few titles under her belt as a child actor when she landed a big break with her role as Peachy on T.G.I.S. Her on-and-off-again on-screen relationship with Wacks was arguably one of the biggest tandems on-screen for the younger set back then. De Leon has stayed active in showbiz since then and you probably last saw her in the musical series Inagaw na Bituin in 2019.

From being a teenage star, De Leon is now a celebrity mom. She married boyfriend Wowie Rivera, a non-showbiz friend she used to play badminton with, in 2010. They have a blended family with a total of four kids and it looks like a couple of dogs, too.

Bobby Andrews set hearts on fire as Joaquin "Wacks" Torres III. His chemistry with de Leon was something else—he even admitted to having tried to court her during their T.G.I.S. days but was dissuaded by her mom. Oh, what could have been. Since then, Andrews has also remained in the limelight but with more low-key roles and scattered appearances here and there (including FPJ’s Ang Probinsyano). He is currently starring in Stay-in Love with Maris Racal and Kokoy de Santos on TV5.

A peek at his Instagram shows that Andrews is very much a dad now, complete with the blurry pics of his fam and happenings. He married long-time partner Bienne Co in 2000 and they have two kids together.

The smart and relatively more level-headed Cristina de Guzman was played by Raven Villanueva. She and Gimik actor Diego Castro were in a relationship in the late ‘90s. They even starred together in the T.G.I.S. spin-off Growing Up. Villanueva and Castro married in 1998 and had a daughter before eventually parting ways. Villanueva then came back to showbiz and took on more mature roles, even posing for FHM in 2001 and 2007.

The last we heard of the star, she was living a more low-key life in the U.S. She started a now-defunct vlog sometime around 2017 where she shared peeks into her domestic life as a mom married to an American pastor.

Cris and Mickey’s more mature relationship was a cornerstone of the show. Even before Michael Flores took on the role, he was already known for being a gifted dancer as part of the Manoeuvres. You can still spot him playing a gun-toting badass in shows and movies (he was in Erik Matti’s On the Job) from time to time. A peek at his Instagram shows Flores enjoying life with his wife Nina Ricci Alagao, Bb. Pilipinas-Universe 2000, and their three sons.

As funny guy Kiko de Dios, Red Sternberg always managed to elicit a laugh. He went on to have a few more projects outside of T.G.I.S.—including an entire movie called It’s Cool Bulol (1988) that stemmed from him being the one to always stumble on his lines—but it looks like showbiz isn’t where his heart is. You can still him pop up on GMA talk shows every now and then! Just keep track of his posts on IG.

In 2015, he told PEP.ph that he was working as a hotel manager in Florida, U.S. He has a family with wife Sandy and three kids.

To match Kiko’s funny vibes, Rica Peralejo later came on board as Michelle. She transferred from ABS-CBN, where she first made it slightly big in Ang TV. Since then, Peralejo has been a mainstay in the limelight. You can usually spot her hosting TV shows and was also on the variety show ASAP for 10 years until 2007 before heading on to Umagang Kay Ganda until 2011. Peralejo also starred in several Maalala Mo Kaya episodes.

In 2012, Peralejo graduated from the Ateneo de Manila University. Since then, she’s been lying low in showbiz and amping up her social media presence. You can catch her vlogs where she shares her life as a mom to two kids. She is married to pastor Joseph Bonifacio.

Ciara Sotto took on the role of Regina “Rain” Abrera who went on to become the “Ate” of the second batch before eventually transferring to the spin-off Growing Up in 1998. The daughter of politician Tito Sotto and actress Helen Gamboa, she would continue on in the showbiz spotlight. Remember her in Mano Po with Sharon Cuneta? Nowadays, the mom of one, a son with former partner businessman Jojo Oconer, is working on her passion for pole dancing. She founded and is the current president of the Philippine Pole and Aerial Sports Association.

This cachupoy-sporting heartthrob started off as a commercial model at just 14 years old. Onemig Bondoc played Jose Mari “JM” Rodriguez in T.G.I.S., who had a thing with Rain, was Michelle’s ex, and was a former crush of Peachy. He transferred to ABS-CBN after his stint in Growing Up and continued doing teleseryes, movies, and hosting until 2005.

Bondoc married model Valerie Bariou in 2009 but they parted ways in 2014. Bondoc is now a businessman and you can get a peek at his life with two kids on Instagram. And as for his hair? The floppy cut is gone, we are almost sad to report.

There was a time Dingdong Dantes went by Raphael Dantes, including during his stint as part of T.G.I.S.’ Batch 2. He played Wacks’ cousin Iñaki Torres, who fell for the kikay Bianca (Antoinette Taus). Dantes and Taus’ team-up proved so successful they became the main leads of the show;they even starred in Sunday drama series Anna Karenina.

Following his success on GMA in the ‘90s, Dantes continued on with the network with roles in titles such as Encantadia—but it was when he was paired with Marian Rivera for the Marimar adaptation in 2007 that sparks really flew, and we don’t just mean career-wise. The role cemented his celebrity status and team-up on the show became a real-life thing, too. Rivera and Dantes are now married with two kids and several businesses, aside from continuing their acting career.

After her successful team up with Dantes, Antoinette Taus continued on with Anna Karenina as well as a few other GMA titles. In 2000, she flew to the U.S. to try and see where her acting chops would bring her in Hollywood. She came back to the Philippines in 2013 to continue pursuing acting—this time with her original network ABS-CBN. Taus worked on some titles such as Bridges of Love (2015) and Tubig at Langis (2016). Taus is also a known philanthropist and in 2019 was named the United Nations’ Environment Programme’s first National Goodwill Ambassador for the Philippines.

Yup, a baby-faced Anne Curtis was also a part of T.G.I.S. batch 2! She played the tomboyish Emily. She transferred to ABS-CBN in 2004, and starred in several shows and movies (Read: Maging Sino Ka Man and the box-office hit,No Other Woman) as well as being a staple of noontime show ASAP. Curtis married Erwan Heussaff in 2017 and they have one daughter, Dahlia Amélie.

Adventurer Savvy Seasoned Tgis Nostalgia Gma Thank God Its Sabado Angelu De Leon Bobby Andrews Raven Villanueva Michael Flores Red Sternberg Rica Peralejo Ciara Sotto Onemig Bondoc Dingdong Dantes Anne Curtis Antoinette Taus Staying In Heading Out Greener
Your Guide to Thriving in This Strange New World
Staying
In? What to watch, what to eat, and where to shop from home
OR
Heading
Out? What you need to know to stay safe when heading out