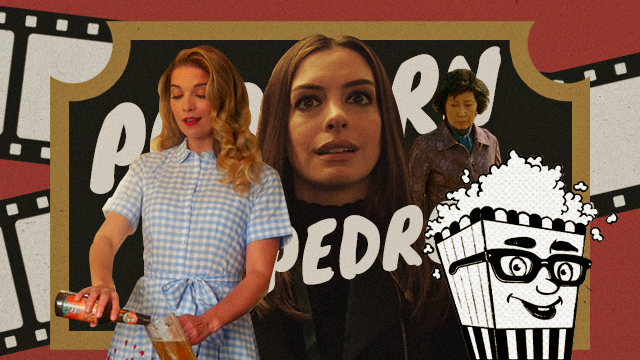 Popcorn Pedro's Guide to Surefire Titles to Stream This Weekend

Tired of making decisions? Popcorn Pedro is here to save the weekend.

(SPOT.ph) Ah, the weekend. It is finally time to kick back, relax, watch a show or two—or three—and then be surprised all over again come Sunday evening because, "Shucks, Monday na naman?!" We feel you. And if you don't want to spend more time scrolling than actually streaming during your few hours of freedom, then let us introduce Popcorn Pedro, our weekly SPOT.ph stream guide!

They have the deets on what shows and movies are honest-to-goodness actually worth a stream, from buzzy titles to ones that may have slipped under your radar. Yup, they dove through all the titles out there so you won't have to tax your brain cells anymore than you have to. And don't worry, Pedro won't feel bad if you munch away on the popcorn during your binge-watch sesh. We think.

Kevin Can F*ck Himself

Where to stream: AMC+

Popcorn Pedro says: No, I'm not including this series just for the title (though if you had an enemy named Kevin, there's definitely some word play you can't miss out on here). So, how do you make a sitcom even better? You throw in a self-aware edge—oh, and definitely some three-dimensional characters. Allison McRoberts (played in split-personality perfection by Annie Murphy) is the typical white sitcom wife. She's pretty, subservient, always has a good-natured smile on, and is super-duper close to killing her man-child of a husband Kevin (Eric Peterson). You just know that's secretly how every sitcom wife felt, or at least, should have felt. In Kevin Can F*ck Himself, we finally get the satisfaction of seeing what goes on outside of the live-audience stage. Spoiler alert: It ain't pretty. We know you're thinking something along the lines of Wandavision—which you probably VPN-ed your way into, like you'll have to for this one (for the legal route)—but this is definitely in a league of its own.

Popcorn Pedro says: Anne Hathaway is one of those stars that have people polarized. It's either you think she's charm personified or you wish she had stayed put in Genovia. Unfortunately for those who think the latter, I'm a proud member of the Anne Hathaway fan club, and this quarantine movie proves we're the sane ones.

Alongside Hathaway's frazzled CEO Linda is the broken Paxton, as played by an equally charming Chiwetel Ejiofor. (Broken as in, well, just not living the life they expected to be living. Hard same.) The two are a couple stuck together in one house thanks to the lockdown—only they broke up right before it started. Awkward. It's got all the stuff we hated (still hate?) when things turned to shit in 2020 but can laugh about now. We're joking. It's still terrible. But at least this potential sappy rom-com swerves way out into the left field by going the heist route, making a 12/10 landing as piloted by Hathaway and Ejiofor. The confused metaphors don't do it justice. Just watch it, will you.

Popcorn Pedro says: Before Bong Joon Ho gave us the stellar, Oscar-winning, genre-bending, multiple adjectives-deserving Parasite, he gave us Mother in 2009. (Not to be confused with the 2017 morbid dream that is mother!). The premise is simple enough: A mother sets out to prove her son's innocence after he is accused of murder. So you're probably thinking tears and motivation and a feel-good story at its core. Except this is Bong Joon Ho we're talking about. So forget any possibility of anything feeling good after this one—and liking it that way. If Parasite left you #shookt, this one will leave you #wreckt, excuse the hashtags. I know it's starting to sound more like a warning but this is honestly our way of saying this masterpiece is so worth the emotional damage. Also, prepare to never see eommas the same way again thanks to Kim Hye Ja.

Popcorn Pedro says: Do you want your quarantine insanity laid bare but in an entertaining, and mildly disturbing, manner? Look no further than Bo Burnham's comeback, Inside. The stand-up comedian-slash-musician took his downward spiral while in isolation and turned it into this can't-look-but-also-can't-look-away masterpiece. I like to think this is what I could have done while going crazy myself, if had the will (or the talent).

Inside isn't strictly a stand-up—it isn't strictly anything definable, really. It's a bunch of things Burnham made without cast, crew, or audience, in just one room. It has drama, comedy, sketches, meta-commentary, and some undeniably banging tunes reaching out in every direction for nearly an hour-and-a-half. It's a ride, that's for sure, if the ride were a rollercoaster that didn't have seatbelts.

Adventurer Savvy Seasoned Viu Hbo Go Netflix Mother Bong Joon Ho Kevin Can Fuck Himself Bo Burnham Streaming Services Staying In Guide Popcorn Pedro
Your Guide to Thriving in This Strange New World
Staying
In? What to watch, what to eat, and where to shop from home
OR
Heading
Out? What you need to know to stay safe when heading out