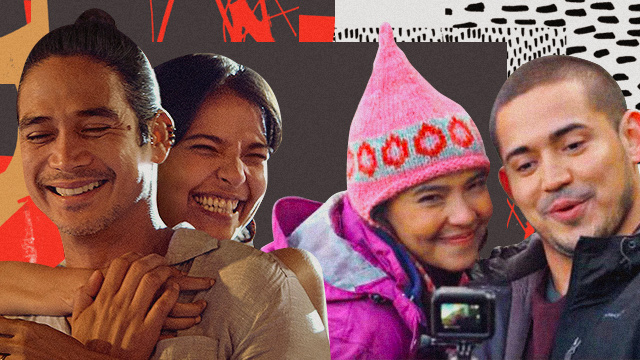 Plus, the surprising connection between My Amanda and Through Night and Day.

(SPOT.ph) Two tearjerker films are currently on Netflix: My Amanda and Through Night and Day. Chances are you've probably shed a tear or two while watching either—or both—while also maybe slightly worrying about Alessandra de Rossi. Both her characters had, erm, similar stories, or at least endings. Not to mention that both movies are based on stories by De Rossi herself! Yup, you can pretty much blame her for all those tears.

This also led us to wondering what was going on when she came up with both intensely bittersweet stories? We got to chat with her online about what was up.(And yes, she's okay guys, no worries!). Spoilers ahead for those who've managed to evade the feels so far.

Also read: My Amanda Confirms What You've Known All Along: You Don't Need a Man

It all started with Kita Kita, says Alessandra de Rossi

Before Through Night and Day (TNAD) and My Amanda came to tug at our heartstrings, there was the massive indie hit Kita Kita in 2017. It starred De Rossi and Empoy Marquez and was directed by Sigrid Andrea Bernardo. This was the movie that started it all. If you've ever watched this one-of-a-kind rom-com, we're sure you understand.

"Kita Kita happened. Everything else just followed," says De Rossi about why she came up with the two stories. "I wanted to give [Piolo Pascual] and Spring Films a thank-you gift for having faith in me; that I could do something out of the ordinary," she continues. Spring Films is the independent production company of actor Piolo Pascual—De Rossi's My Amanda co-star—and director Joyce Bernal that was behind Kita Kita. Fun fact: This pair is also one of De Rossi's inspirations for Fuffy and Fream.

My Amanda Was the OG

Truth is, the story for My Amanda came before Through Night and Day—only Pascual wasn't available for filming. "I couldnt imagine another actor playing Fuffy. Only Piolo," she said. "I was finished writing [My Amanda] by the end of 2017. But since Piolo was so busy and he was always abroad, when time came that I was ready to film, and they wanted that story, I said no! I have a different one."

"So I came up with another set of characters, with the same fate," she continues. So there's one reason for those endings! As De Rossi cheekily exclaims "TNAD is copycat! Okay I said it! No regrets!"

De Rossi even ended up in Iceland while completing TNAD. Ultimately though, she worked with screenwriter Noreen Capili "because I don't want the language to sound the same [as My Amanda]." She jokingly explains that she couldn't get some parts of the screenplay as "I write whatever comes to my head. That's why I thought it was a good decision to hire a professional writer to get the job done.

TNAD Could Have Been De Rossi's Directorial Debut

De Rossi says that with Capili taking over the official writing, she thought she'd be able to star and direct TNAD at the same time. Until she admitted to herself "It would be too heavy for a first-time director, who is also gonna act, abroad. I started thinking about everything that could happen. But at least, I'm still in touch with reality," she says laughing. "What can't be done, can't be done!"

My Amanda proved to be easier, both in making the story and the film itself. "My Amanda was just easier to do. It's just two friends laughing and loving each other. It felt closer to home," says De Rossi. And based on how the friendship-over-romance movie, it was definitely the right choice!

And as for the endings? Turns out "the end of My Amanda was really unplanned. For Jen, she was born in my head that way." And no matter how heartbreaking, De Rossi adds that she doesn't mind ending things that way "as long as I believe in the project."

Check out Alessandra de Rossi and Piolo Pascual's hilarious chaotic energy while at the My Amanda press conference:

Adventurer Savvy Alessandra De Rossi Netflix My Amanda Through Night And Day Streaming Services Staying In Heading Out
Your Guide to Thriving in This Strange New World
Staying
In? What to watch, what to eat, and where to shop from home
OR
Heading
Out? What you need to know to stay safe when heading out