John Lloyd Cruz as "Ugly Indio" in Globe Studio's Ang Fraile
Loading
Already a member? Log in
No account yet? Create Account
Spot.ph is your one-stop urban lifestyle guide to the best of Manila. 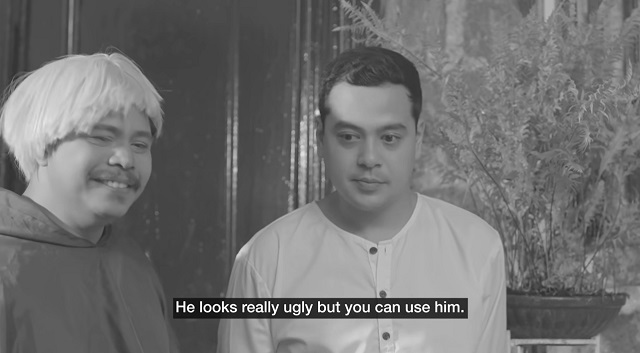 Ugly but can cook rice, which is really all that matters.

(SPOT.ph) Move over Padre Damaso, there's a new fraile to hate on—and he's played by Jun Sabayton. The comedian joins Cherie Gil, Joel Torre, Ronnie Lazaro and yup, John Lloyd Cruz, in a hilarious mini-series entitled Ang Fraile. Directed by RA Rivera, this Globe Studios title stars JLC as "the ugliest of all the indios," Pepito.  You read that right. Don't believe us? Check out the trailer for this offbeat series below:

JLC takes on the role of Pepito, a.k.a. the ugliest indio in the town of San Edgardo during the tail-end of the Spanish occupation. He ends up as a slave to Fraile Enrique Iglesia (Sabayton) after he was given as a gift by Don Tadeo (Torre), on the basis of him being very good at cooking rice. Pepito ends up spending his days perfecting his saing skills while Don Tadeo and Fraile Enrique rule over the townsfolk. Until, the ugliest indio—who, BTW, is relentlessly picked on for his looks—starts asking some very strange questions.

There are no hunchback prosthetics or cliché facial marks added to JLC's looks for this series, thankfully. He just happens to be really ugly in this specific RA Rivera world.

The two-episode series can be streamed on Globe Studios's YouTube page. The first episode dropped on July 30 and was a fun 10-minute black-and-white ride, complete with hilarious subtitles. The second episode drops on August 6, 8 p.m. This mini-series marks JLC's first acting stint since he announced his comeback! We're definitely marking our calendars.

Adventurer Savvy John Lloyd Cruz Ang Fraile Jun Sabayton Ra Rivera Cherie Gil Joel Torre Streaming Services
Your Guide to Thriving in This Strange New World
Staying
In? What to watch, what to eat, and where to shop from home
OR
Heading
Out? What you need to know to stay safe when heading out