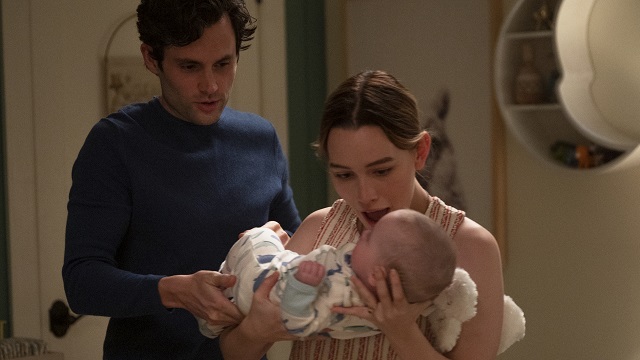 You Season 3 Is Coming and So Is That Baby

They announced the release date with the most sinister cake-making video ever.

(SPOT.ph) It has been nearly two years since we last saw Joe (Penn Badgley) and Love (Victoria Pedretti) in the second season of You—and we're finally going to get to see the crazy couple again soon! Netflix finally announced that You Season 3 arrives on the streaming platform on October 15. To really set the vibe, they dropped the release date via an oddly sinister baking video, complete with a voiceover from Joe talking about his son's name. Oh yes, Season 3 makes three. Check out the teaser and the first photos below!

Everything we know so far about Season 3 of You on Netflix:

The last time we saw Joe and Love, they had just manipulated, murdered, and snuck their way to become a perfect suburban family, with—spoiler alert!—Love revealing that she had pulled a "Joe" over Joe himself. Look, we know they're bad people but all their evil somehow makes the relationship work. With the third season and a baby coming in, we're kind of hoping they'll turn over a new leaf (Read: Become sane)—but that bloody cake definitely says no.

So what will the third season be about? Well, "[Love is] certainly set up to have very much her own story moving forward," showrunner Sera Gamble said in an US Weekly podcast in 2019. The first two seasons showed "the world through this particular man’s gaze. He is our window into the world, in a much more direct way than on a lot of other shows. The intention is to build her out—her point of view, her desires, her problems—in a way that makes her feel as fully realized as her troubled romantic partner."

Meanwhile, we'll be seeing Joe take on the role of fatherhood. The cake teaser certainly says he'll be as, erm, dedicated, as he usually is—but whether the arrival of Henry will actually stop his stalking-slash-serial-killing ways is yet to be seen. "It’s a show about love and obsession and where the line is between the two of those — and the character of Joe will always look outside himself for this thing that completes him," said Gamble.

Now whether Joe and Love really are endgame is our biggest question. Season 2 sets them up as a couple teetering between made-for-each-other and will-literally-kill-each-other. What we are sure of is that this next season is going to be crazy!

Adventurer Savvy Netflix Streaming Services You Penn Badgley Staying In
Your Guide to Thriving in This Strange New World
Staying
In? What to watch, what to eat, and where to shop from home
OR
Heading
Out? What you need to know to stay safe when heading out