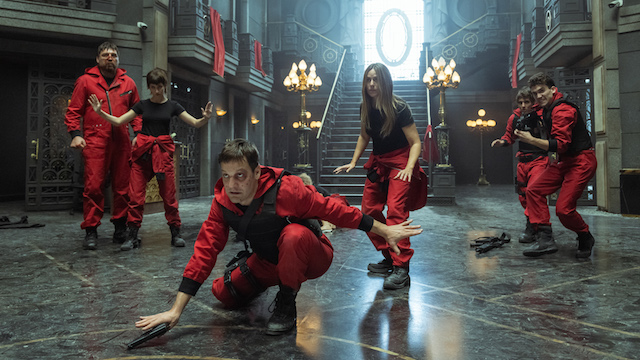 Even the creators didn't expect so many twists and turns!

(SPOT.ph) With The Professor compromised and his team in the Bank of Spain, the final season of Money Heist isn’t looking too good for the heist team. And with Volume 1 of Part 5 on Netflix beginning today, September 3, fans of the series cannot wait to find out if the gang can pull off the greatest heist in history and still remain one step ahead everyone.

Also read: Not Over Money Heist? There's an Hour-Long BTS Documentary You Can Watch, Too

What to Look Forward to in Money Heist Season 5

If you’ve been following the show religiously, you’ll know that it’s going to be one heart-stopping ride. As seen in the season’s trailer, surrendering is not an option for the team and they are getting ready for war. And for those who have yet to start watching the show, it’s best to brace yourself for twists and cliffhangers. “Everything comes as a surprise at Money Heist. It has this sort of rock-and-roll spirit to it,” says Úrsula Corberó, who plays Tokyo in the show, in an interview with SPOT.ph. “[Series creator] Álex Pina and the other creators feel more comfortable coming up with ideas in the last minute which keeps us on tenterhooks as actors,” she adds.

With production going all out for the final season, it seems that it’s not only the element of surprise that loyal viewers should worry about as the series comes to a close. An enemy unlike any other the gang has faced is getting ready to take over the bank. “This season is going to be war-like,” shares Corberó, and it looks like Tokyo and the others have met their match in the army.

So will they make it out alive? Will The Professor escape the clutches of police inspector Alicia Sierra? Jaime Lorente, who plays Denver, puts it simply, saying, “I don’t think they expect what’s coming. [Fans] will be deeply touched in emotion, they will suffer, they will enjoy it, and I think it will be out of their expectations. I wish,” he adds.

With Volume 2 scheduled to arrive in December, fans still have enough time to dissect every episode and come up with their own theories. “Sometimes, I would ask Álex how it’s going to unveil and he would say, ‘I really don’t know.’ I think not even the creators expect so many twists and turns themselves,” says Corberó.

In a separate interview, creator Pina revealed that the writers came up with “32 versions, 34…I don’t remember anymore how many there were of that finale” before finding the “solution” they were looking for. “That twist, which was about to happen and was necessary and essential, came out all at once…ultimately, when you work with these key elements, plot twists; you don’t know if you’re going to reach the end. And when you see them, you say ‘Of course, that’s what was planned all along.’ No sir, it was not planned all along. We figured it out at the last minute,” he explained.

Watch the official trailer of Season 5 below:

Adventurer Savvy Seasoned Money Heist Netflix Streaming Services Staying In La Casa De Papel Con-00263
Your Guide to Thriving in This Strange New World
Staying
In? What to watch, what to eat, and where to shop from home
OR
Heading
Out? What you need to know to stay safe when heading out