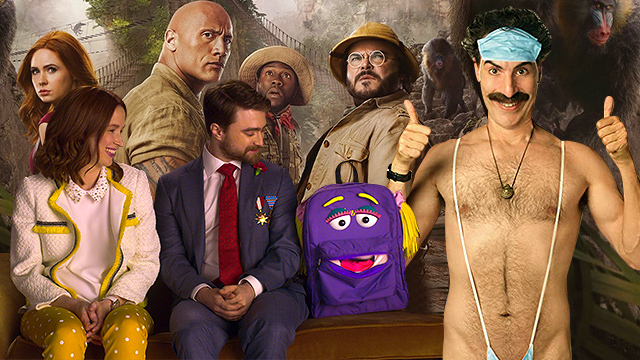 10 Hilarious Movies to Stream, Ranked by How Likely They Are to Make You LOL

We all could use a good laugh these days.

(SPOT.ph) It’s been said that laughter is the best medicine. Sure, that’s an extreme hyperbole and not exactly proven by science, but it’s also not totally false. When times are tough (2020, meet 2021), and the bad news just keeps coming, often a funny video helps bring the mood up. With everything found on streaming sites nowadays, such as the multitudes of new comedies, it’s easy to switch on a movie, forget your troubles, and laugh.

Comedies over the last few years have become braver, more challenging, and more hilarious—finding the funny in growing up during this new Internet age, the rise of the megalomaniacs, and even in being a superhero. We’ve put together a list of films that will have you laughing out loud, ranked from “good vibes” to “I can’t breathe, tears are coming out”!

Also read:
The Ultimate Subscription Guide: Which Streaming Service Should You Get?

Need some laughs in your life? Check out this list of comedy movies for some LOLs:

Paddington 2, which at one point in 2021 held the title of best reviewed movie on Rotten Tomatoes, is the sequel to the equally beloved 2014 film Paddington. Based on the stories of the character Paddington Bear, this British family comedy about an anthropomorphic bear (voiced by Ben Whishaw) living in London is good, clean fun for the whole family. Its sweet nature and colorful set pieces make for an entertaining movie that will have you smiling from ear to ear. In this sequel, Hugh Grant gives one of the best comedic performances of his career as a narcissistic but silly villain.

Want to choose what insane comedic interaction you’ll get to see? Check out this interactive film sequel to the TV series Unbreakable Kimmy Schmidt. This movie picks up where the series left off, with Kimmy (Ellie Kemper) finally living her best life after being kidnapped and placed in a bunker for years. She’s now a successful author about to be married to a Prince (Daniel Radcliffe). Or is she? How her story ends is up to you. Maybe you’ll end up doing karaoke with a robot, or eating a massive amount of pasta that turns out to be dirt—whichever you find funnier, you get to choose. And some choices end the movie immediately, closing often with an absolutely surreal scene, so choose wisely!

Starring Saturday Night Live favorite Pete Davidson, Big Time Adolescence is a standout among the many coming-of-age comedies out there, thanks to Davidson’s specific brand of comedy that’s both smart and crude. In Big Time Adolescence, drug-loving degenerate Zeke (Davidson) is best friends with his ex-girlfriend’s younger brother Mo (Griffin Gluck), who is about seven years younger than him. Is Zeke a good influence? Well, the crazy hijinks these two get themselves in can answer that question. While yes, this movie does have some touching moments, it’ll have you laughing throughout as well.

A surprise hit after it was released on Netflix in 2020, Ang Pangarap Kong Holdap is about a group of incompetent thieves in over their heads as they plot their first big heist, and become the most feared gang and the number-one “holdapers” in their barangay. Starring some of the Philippines’ most hilarious character actors like Pepe Herrera, Jerald Napoles, Paolo Contis, and Pen Medina, this comedy-heist film will definitely have you laughing thanks to this movie showing just how inept and delusional some people can be, while also mixing in a little bit of thrill to add to the excitement.

The superheroes of the DC Extended Universe—such as Superman, Wonder Woman, and Batman—are rarely depicted in pure comedy movies. Enter Shazam!, a comic-book movie about a teenager named Billy Batson (Asher Angel) who is given powers by an ancient wizard. He becomes an adult superhero (Zachary Levi) whenever he yells the word, “Shazam!” What’s a 14-year-old boy in a man’s body supposed to do with all these new superpowers? Buying alcohol and going into strip clubs are part of the agenda, so is a hilarious sequence of testing his powers—including if he can fly and how much pain can he really take. This comedic take on the superhero genre was a fun change of pace for the often-serious DC Extended Universe.

If you’re not European, the Eurovision Song Contest may not mean that much to you. But thanks to Will Ferrell, the whole world is now aware of the enjoyable but often bizarre songwriting contest between European nations. In Eurovision Song Contest: The Story of Fire Saga, Ferrell and Rachel McAdams star as an Icelandic musical act who hope to win the Eurovision Song Contest one day. When the duo gets into the contest thanks to some wild circumstances, the ill-equipped but well-meaning band “Fire Saga” fights to win. What follows is what you’d expect from any Ferrell movie—touching, a little bit ridiculous, and full of laughs from start to end, with great music to boot.

No one really expected the reboot of the treasured 1995 version of Jumanji to be as good as it was. Even more so, no one really expected its sequel to be just as good. In Jumanji: The Next Level, Dwayne Johnson, Jack Black, Kevin Hart, and Karen Gillan return to the video game world introduced in the 2017 film as they once again get trapped in it, but with even more body swaps and fun powers to go around. This time, though, they are joined by Awkwafina, Danny Glover, and Danny DeVito. With a cast like this, there’s no doubt you’ll have a great time laughing at the wild action sequences and humorous dialogue, and by the end you’ll be hoping for another go-round.

Produced by Seth Rogen and Evan Goldberg who brought us one of the greatest coming-of-age comedies in Superbad comes this cringe-inducing but completely hilarious and deeply inappropriate film about sixth graders getting into trouble. If you didn’t think you’d ever see sweet, little Jacob Tremblay (Room) curse, fight with frat boys, or practice kissing a sex doll, well this movie really lets you have it. While there is that initial shock factor of 12-year-olds getting into very adult situations, there’s a heartfelt and sweet comedy about friendship under all that. So while you’re laughing at how ridiculous things are getting, you’ll also be moved by the importance of childhood friendship.

Most coming-of-age films feature male casts and the teen guy’s point of view, but in Booksmart, we get two smart, silly, but lovable ladies front and center. Beanie Feldstein and Kaitlyn Dever star in what many called a female version of Superbad—yet that feels like it’s taking so much away from this highly original and raucous comedy about missed chances and enjoying life while you’re young. Booksmart focuses on two teenage girls who spent their high school life perfecting their report cards, but not partying, so they cram four years of widling out into the last night before graduation, which of course leads to moments that you’ll have to pause because you’re laughing so much.

Fourteen years after the groundbreaking first Borat film, Sacha Baron Cohen returns with his most popular character—the Kazakh journalist Borat Sagdiyev. After the events of the first film, Borat is jailed for bringing shame to his country, but in this sequel, he’s given a chance to make things right, by delivering his daughter (hilarious newcomer Maria Bakalova) to the United States to be offered as a bride to then-United States Vice President Mike Pence. Made quickly during the horrific year of 2020, Borat tackles Donald Trump and other narcissitic leaders, cancel culture, as well as the coronavirus. The film, which earned two Oscar nominations this year, is irreverent and disturbing in the best ways, really finding ways to make fun of the most awful things over the last few years, and make viewers laugh—something we all need during this time.

Comedy Movies Con-00263 Streaming Services Guide Netflix Hbo Go Paddington 2 Unbreakable Kimmy Schmidt Big Time Adolescence Ang Pangarap Kong Holdap Shazam Eurovision Song Contest The Story Of Fire Saga Jumanji The Next Level Good Boys Booksmart Borat Subsequent Moviefilm Greener
Your Guide to Thriving in This Strange New World
Staying
In? What to watch, what to eat, and where to shop from home
OR
Heading
Out? What you need to know to stay safe when heading out