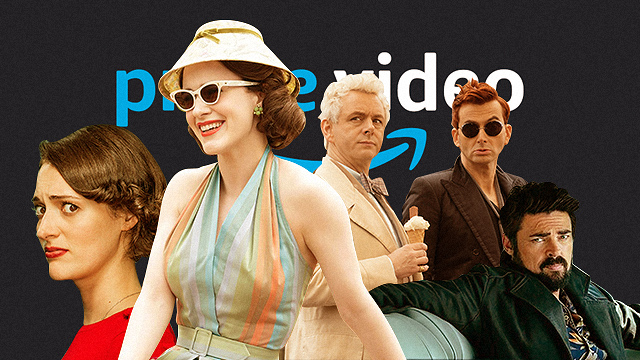 From sci-fi fantasy to cutesy romances.

(SPOT.ph) Running out of series to watch? We feel you. We round up some of the best series to stream on Amazon Prime Videos. Whether you’re already subscribed or just looking to see whether a subscription is worth it (Yup, it is!), here are the titles worth checking out on Prime Videos. They’ve got a varied mix of sci-fi, offbeat, romance, fantasy titles and more.

Add these great series on Prime Video to your watch-list:

Midge Maisel (Rachel Brosnahan) is the perfect '50s housewife. Young, upper class, and living in Upper West Side Manhattan, you’d think she leads the perfect, fashionable lifestyle—until her husband leaves her for his secretary. Bringing even more shame to her family then her decision to divorce him (a public decision) is the fact that she now wants to pursue a career in stand-up (a deep dark secret she does her best to keep). Her stand-ups—not to mention that impeccable wardrobe—are more than enough to reel us in, but paired with an awesome story and a wild cast of characters? Hook, line, and sinker.

Aziraphale and Crowley are an angel and demon, respectively, cast down to Earth as their dominion’s representatives. After thousands of years living amongst mortals, they somehow end up liking the place—enough to actually want to stop the coming of Antichrist and with it, the Armageddon. This leads to the odd team up of the long-time, erm acquaintances, played by Michael Sheen and David Tennant. If you’re into the fantastical worlds of authors Neil Gaiman and Terry Pratchett, then this is definitely the show for you; it’s based on their 1990 novel of the same name.

Every Sunday since 2004 The New York Times has published the Modern Love column, a space for short, anecdotal stories on what else but modern love in all its manifestations. Amazon took some of the best stories from the column and turned them into an anthology series of the same name. There are two seasons now of all kinds of stories that touch on the familiar—from chance meetings on a train (with Kit Harington) to sentimental connections with material objects—with each offering a look into love. Best part? Each episode is only around half-an-hour, so commitment won’t be an issue here.

Prime hit us with the first season of this addictive black comedy back in 2019 and there’s no danger of falling short with this one, especially since the third season has already been greenlit. In a world where superheroes are idolized—to the point of enjoying impunity—one gang of anti-superhero heroes decides to take action. Karl Urban takes on the role of tough Billy Butcher, leader of The Boys, as they try to take down the revered Seven, the “superheroes” controlled by the conglomerate Vought International.

Once again proving that cartoons are not just for kids, this trippy animation takes you on a ride with an even trippier story. Alma (Rosa Salazar) gets into a fatal car crash and manages to survive—only it seems her relationship with time has changed. Alma then uses her newfound ability to discover the truth of her father’s death. Yup, it’s definitely something better seen than read.

There have been a lot of unforgettable series that dealt with the afterlife but before you dismiss Upload as just another one, we really want to vouch for it. Nathan Brown (Robbie Arnell) has himself digitally uploaded to the Lake View program after a premature death. There he adjusts to the pros and cons of an online afterlife—while still dealing with his possessive, alive girlfriend—and finding a friend in his (alive) customer service rep Nora (Andy Allo). The series gets pretty deep into life and the afterlife, and oh yeah, it seems Nathan’s death isn’t as surprising as it seems.

Allison McRoberts (played in split-personality perfection by Annie Murphy) is the typical white sitcom wife. She's pretty, subservient, always has a good-natured smile on, and is super-duper close to killing her man-child of a husband Kevin (Eric Peterson). In Kevin Can F*ck Himself, we finally get the satisfaction of seeing what goes on outside of the live-audience stage—as well as how the typecast wife finally gets sentience. Spoiler alert: It ain't pretty. We know you're thinking something along the lines of Wandavision but this is definitely in a league of its own.

In a small fictional town called Mercer, Ohio is the Mercer Center for Experimental Physics, an underground facility better known as the Loop. Here, researchers work to make the impossible possible, as Russ (Sir Jonathan Pryce), the Loop’s founder, says in the trailer. This leads to a place unlike any other; an anthology series of sorts, this series takes you through the interconnected lives of many in the town of Mercer—all as they experience the wonders brought by the Loop. If the series looks somehow familiar, it is because it was inspired by the thought-provoking works of Swedish artist Simon Stalenhag.

Nine people from different backgrounds gather for an ultra-fancy 10-day retreat at Tranquillum House, run by the overly perfect Masha (Nicole Kidman). Each one is there in hopes to cure themselves of some personal problem. They go through different routines at the picturesque retreat house but eventually realize that Masha’s method may not exactly be what they expected—resulting in chaos.

Yup, this award-winning show is available on Prime! If you have not yet watched this BBC and Amazon Studios co-production, then it is definitely the time to do so. Created by and starring Phoebe Waller-Bridge, it follows a young, angry, frustrated woman known only as Fleabag as she tries to make sense of the world. The acclaimed series is praised for its unique presentation and humor, with Fleabag hilariously breaking the fourth-wall every once in a while. It is definitely something worth watching at least once.

Greener Guide Adventurer Savvy Seasoned Amazon Prime Prime Videos Streaming Services The Marvelous Mrs. Maisel Undone Upload The Boys Tales From The Loop Fleabag Nine Perfect Strangers Kevin Can F Himself Good Omens Staying In Prime Video
Your Guide to Thriving in This Strange New World
Staying
In? What to watch, what to eat, and where to shop from home
OR
Heading
Out? What you need to know to stay safe when heading out