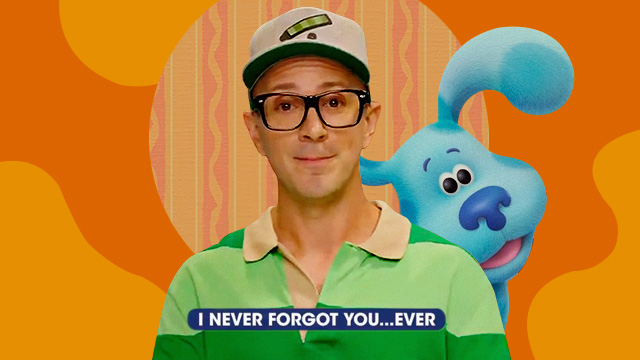 You Don't Understand, We Needed That Closure From Steve of Blue's Clues

Closure? From a kid's show? Hell yes. And it's valid.

(SPOT.ph) It is probably all over your feed right now: that clip of Steve of Blue's Clues that the Nick Jr. channel dropped in celebration of the show's 25th year. If you're wondering why people are all up in their feels over the two-minute message of a dude that you barely remember hosted a U.S. kids' show back in the day, well, we're here to clear things up! We're sure you've seen your Facebook friends crying all over your feed and the reactions have even taken over Twitter's top trends as of writing—and trust us, all this freaking out is valid.


A generation finally has the closure most of us probably didn't even know we needed. Not sure what we're talking about? Well, first you may want to check out the clip.

Steve Burns was the original host of Blue's Clues, a Nickelodeon show that's been around since 1996. Most kids back in the early 2000s would spend their mornings helping him, clad in his unforgettable striped green sweater, out as he collected clues to figure out what his dog Blue wanted. We sang songs, danced along, got the mail, gamely pointed to (the very obvious) clues that were on the screen, and sat furiously thinking in our own versions of the thinking chair—until one episode when Steve suddenly left for college.

That abandonment is what Steve finally opened up about to us, nearly two decades later. Okay, so you're probably thinking wow, "abandonment" is a big thing to accuse a TV show host of—but we'll set the scene. You're around seven or eight years old, and in an ideal situation, have not yet dealt with just how much of a shithole the real world is. Nearly every day you help your friend Steve out on the TV and in general, life is great. Then suddenly one day, in what you thought would just be a normal episode, Steve brought along his brother Joe, whom you've never seen before, tells you he's off to college, and just straight-up walks out the door—gone forever. (Forever, speaking from a kid's perspective).

Truth be told, most of us did move on with our lives just fine. Over time, the memories faded—until today. Steve's message hit like a 10-ton truck and on some level, it helped us process some things we didn't know we felt when we were kids. We love that he even pointed out how abrupt his leaving was—and then acknowledged the growth we've all experienced since then. We may not have expected those words from him, probably didn't even need it from him specifically, but kind words are hard to come by nowadays.

Steve went on to pursue a music career. You can even spot him on Nick Jr's social media along with the other Blue's Clues hosts, Joe (Donovan Patton) and the reboot's Josh Dela Cruz, from time to time! As to why he really did leave Blue's Clues, Steve would say in a 2016 interview that "I left the show because it was just simply time to go." At that point, he was around 26 years old wasn't about to spend his entire life as a TV show host. MTV even reported that one of the first things he did after the last Blue's Clues shoot was to shave his head, something he wasn't allowed to do while working on the show.

Closure isn't exactly what we expected from a show we used to watch as kids, either, but damn, are we thankful for it. In a world with so few bright spots—so little time or even capability to process and acknowledge our experiences, individual or collective—Steve's unexpected message of closure is also a reminder that our feelings are still valid. And yes, we are allowed to take the time to talk about it. So thank you, Steve!

Meanwhile, in case you're still reeling from the clip, we round up some of the best reactions below, just so you know you're not alone!

Bonus tweet in case you need to relive it:

Adventurer Savvy Seasoned Nostalgia Blues Clues Twitter Staying In Trending
Your Guide to Thriving in This Strange New World
Staying
In? What to watch, what to eat, and where to shop from home
OR
Heading
Out? What you need to know to stay safe when heading out