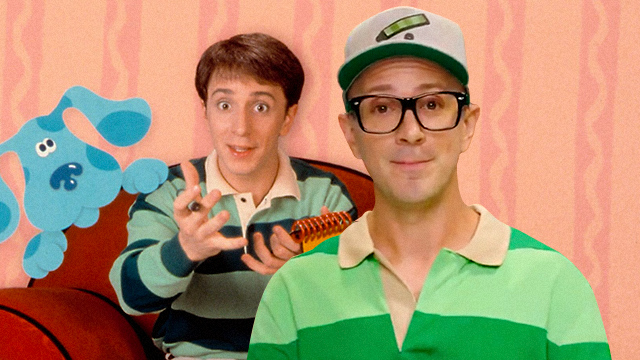 Then and Now: Steve From Blue's Clues

Here's what our friend has been up to!

(SPOT.ph) Raise your hands if you feel like Steve Burns' message for the 25th year of Blue's Clues felt like a much-needed visit from an old friend! The Nick Jr channel dropped a short clip of Steve in character checking in on us—and more importantly, acknowledging his abrupt departure from the show nearly two decades ago—on September 8, promptly sending '90s and early 2000s kids bawling online.

Also read: You Don't Understand, We Needed That Closure From Steve of Blue's Clues

"I just kind of got up and went to college," said Burns in the clip, admitting that his departure was (very) abrupt. On the bright side, he added that "I got to use my mind and take a step at a time and now I literally am doing many of the things that I wanted to do," and then congratulating us on all the things that we managed to accomplish, too.

After processing all the feelings the clip set off, we got to wondering what he's been up to lately; what all the things he "wanted to do" were. And it turns out he never did really leave us! We all just grew up—and you can check in on him too below.

So first things first, Steve said that he was off to college. In reality, his college days were already far behind him.

Burns was a theater kid who left DeSales University after being scouted in the early '90s, moved from Pennsylvania to New York City and started off as a voice-over artist. He showed up to the Blue's Clues audition thinking it was another VO gig—dressed in camo pants, with one earring on and long hair according to Internet lore—but somehow landed the job.

"I thought it was a voice-over audition," Burns told SPIN in 2004. "And it was not. So I figured I’d better start jumping around." The show premiered in 1996 and became a global hit. Burns was just 22 years old.

For the next five years or so, Steve in his khakis and green-striped shirt would go on clue-hunting adventures set up by his animated blue dog with us playing along on the other side of the screen. Until 2001, when he abruptly left the show.  "I didn't really want to become Krusty the Klown in front of the nation," he told Time magazine in that year's January issue.

At that point, he was around 27 years old and well, balding. As Burns told the Daily Mail in 2017, "I was going bald and I kind of looked around and I'm like, 'The people who decided that I should wear these pants are not going to choose a wig with any dignity for me. It's just not going to happen.'" Shaving his head was one of the first things he did after leaving the show.

The sudden departure set off a storm of crazy rumors for the next few years, saying everything from him dropping out of college (partially true), becoming a drug addict, and dying in a car crash. We're sure you heard some of those—thankfully, not true.

What is Steve Burns up to now?

Burns never really left the entertainment industry. He picked the guitar right back up and released an indie rock LP called Songs for Dustmites in 2002, as helped by folks from psychedelic rock band The Flaming Lips. You might have heard a song from the album "Mighty Little Man." That track is the opening theme for the Big Bang Theory spin-off Young Sheldon.

Burns also started a band called Steve Burns and the Struggle. In 2016, he released a kid's album called Foreverywhere under the name STEVENSTEVEN. You can check out the trippy music video they released for the first track "The Unicorn and Princess Rainbow."

Burns returned to Nickelodeon to help out with the Blue's Clues reboot Blue's Clues & You in 2018. And yup, he came back as Steve, alongside new hosts Donovan Patton and Joshua Dela Cruz for the show's 25th year!

You can keep up with Burns on his very aptly named Instagram SteveBurnsAlive. It looks like he's also a photographer with epic pictures of his trips—and also an adorable boxer!

And if you think Burns wants to get rid of the Blue's Clues image, then you're very wrong. He did come back to check in on us, after all. But as he told MTV in 2002, "I hope I'll be remembered for that show for the rest of my life. That will always be a part of my identity, and I'm totally cool with that." Yup, he really didn't forget about us.

What Everyone Is Reading

Adventurer Savvy Seasoned Nostalgia Nickelodeon Steve Burns Staying In Blue's Clues
Your Guide to Thriving in This Strange New World
Staying
In? What to watch, what to eat, and where to shop from home
OR
Heading
Out? What you need to know to stay safe when heading out