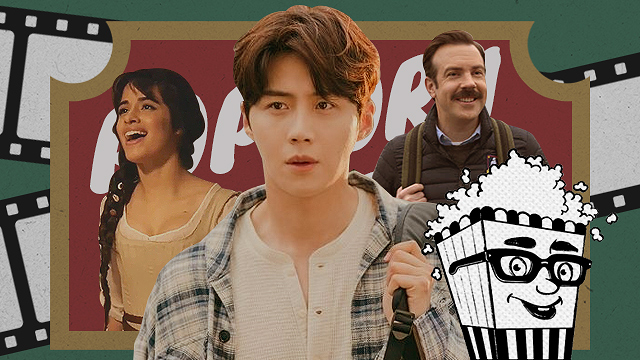 We throw in 2002 horror flick The Eye in just for fun too.

(SPOT.ph) You probably don't want to hear this but Christmas is now less than 100 days away. Disclaimer: We're not angry about Christmas itself—just the fact that we have no idea where time is going. If the anxiety and stress are starting to build up, Popcorn Pedro has some fun titles to stream for this weekend's selection! And if you're one of the rare ones that like to have fun by getting stressed out (vicariously), there's an unmissable classic Asian horror flick too.

Popcorn Pedro says: Shutter, Grudge, One Missed Call, et cetera—Asian horror movies of the '90s and early 2000s were something else entirely, and Netflix has one of the lesser-known picks from this era up on streaming! There's no way you'd forget this Hong Kong-Singaporean movie from the Pang Brothers: A violinist receives a cornea transplant that restores her sight a little too well. When she starts seeing dead people (think Sixth Sense but bring up the horror to 100), she sets off to find out more about her donor and the strange curse she had. Part horror, part investigation, this movie will bring you along one heck of a story. It was so good Hollywood had to remake it in 2008 with Jessica Alba in the lead. But yeah, I definitely recommend the OG more. No comment. Also, watch out for the elevator scene.

Popcorn Pedro says: Raise your hands if you just want to drop everything and move to a quiet town. Maybe even meet a nice guy. Well, that's exactly what dentist Yoon Hye Jin (Shin Min A) does after leaving the big city and moves to a quiet seaside town—where of course she meets the charismatic Hong Du Sik (Kim Seon Ho). Her perfectionist and professional nature clashes with his happy-go-lucky and easy going demeanor at first but a small town is after all, small, and the tension can only get more tension-y with each meeting!

Popcorn Pedro says: So while the world was burning, they decided it was time to make yet another Cinderella movie. But hey, don't knock it till you've tried it! Sure, there's a truckload of negative criticism pouring in online but TBH, if you just want a pop-and-rock version of Cinderella with a heroine that's more interested in using capitalism to somehow save herself than a prince, then this Camila Cabello-starrer is for you. It's got fun outfits, lots of dancing and singing, and even Idina Menzel, Minnie Driver, and Billy Porter. Pierce Brosnan is in here too, in case you're an 007 fan. Bottomline: Ella Enchanted isn't on streaming (legally) so hey, I'll take what I can get.

Popcorn Pedro says: The Emmy awards have been all over this show for a reason. What's all the buzz about? Jason Sudeikis takes on the role of Ted Lasso, a U.S. college football coach who ends up on the other side of the pond after being recruited by English Premier League team AFC Richmond—for less than legitimate reasons. With that mustache thing on his face and folksy American ways, the English are less than impressed. But Ted Lasso manages to win them over, and he'll probably win you over too. Get ready for a dose of unexpected wholesome content.