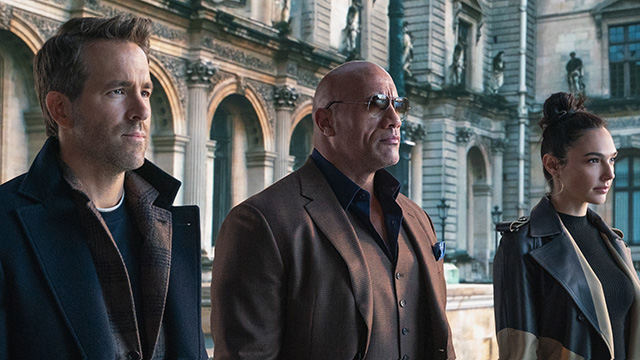 Ryan Renolds says filming was "like going to work with your best buddies."

(SPOT.ph) If you're down for some lighthearted, fast-paced action-comedy, Netflix's new art heist film Red Notice hits the platform on November 12, just in time for your weekend movie marathon. It stars the triple-threat powerhouse that is Ryan Reynolds, Dwayne Johnson, and Gal Gadot. Whether you're watching alone, with a few buddies, or with the fam, you'll be glad to know that not only is the film fit for all ages, it also doesn't take itself too seriously and we mean that in a good way—who wants to sit through a serious flick on their day off? In fact, Reynolds—the comedic heart of the film—says in a roundtable interview with SPOT.ph that many of his character's wit and hijinks came because he and his co-stars "were just trying to make each other laugh."

Also read:
Netflix's Red Notice Doesn't Take Itself Too Seriously and You Shouldn't Either

Reynolds plays art thief Nolan Booth who, though introduced to the viewer as a criminal mastermind, is most memorable in the film for his wisecracks and one-liners. He spends most of the movie teaming up Bad Boys-style with Johnson's more serious John Hartley. The combination of the two—one a well-intentioned good guy and the other a sarcastic jokester—carries much of the film.

That's not to say that Gadot didn't do her fair share of heavy-lifting—the three appear in many scenes together and their many moments of butting heads are as silly as they are action-packed. Gadot plays The Bishop, a cunning and crafty rival bandit to Reynolds’ Booth. You'll love seeing the three personalities bicker and spar all in the same breath.

While many will no doubt stream the film for its action-adventure aspects Reynolds' rapid-fire quips—constantly bouncing off of Johnson's more subdued straight man act and Gadot's mischievous villain characters—will be one of the things that really make you stay until the end credits. Reynolds notes that in order to achieve his character's slew of nonstop side comments, he performed a variety of options whilst shooting. "I generally try to do five or six, sometimes 10 alternate versions for each joke," he recalls. "I write them out in advance and then I just sort of fire them out."

He notes that some of his alternate versions  are clean and family-friendly, others are somewhere in the middle, and the rest are probably a little too scandalous to include in the final edit. "I was frankly surprised at how many lines ended up in the movie that I wasn't intending to be in the movie," he jokes. Ultimately, Reynolds left it to director Rawson Marshall Thurber to choose. "There's a lot that was left on the cutting room floor," he says. Oh, what we'd give to have been a fly on the wall of that movie set.

All in all, Reynolds attributes the great onscreen dynamic among the three lead actors to chemistry. "If you don't have [chemistry], you're kind of screwed... it's not really something you can invent." And indeed, even as the three characters throw hands throughout the film, they bounce off each other without missing a beat and without sacrificing their own individual charms. "That is literally how we talk to each other when we're just sitting around," Reynolds says.

“It' a really exceptional experience because you’re working with people you know—these are friends of mine," says Reynolds in earnest, noting that he's been friends with Johnson for over 20 years and has known Gadot for nearly a decade. "It's a little bit like going to work with your best buddies. And that’s the best way you could possibly be going to work.”

Red Notice Savvy Adventurer Seasoned Streaming Staying In Ryan Reynolds Dwayne Johnson Gal Gadot Entertainment Netflix
Your Guide to Thriving in This Strange New World
Staying
In? What to watch, what to eat, and where to shop from home
OR
Heading
Out? What you need to know to stay safe when heading out