Red Notice Review: A Funny Heist Film the Fam Can Watch
Loading
Already a member? Log in
No account yet? Create Account
Spot.ph is your one-stop urban lifestyle guide to the best of Manila. 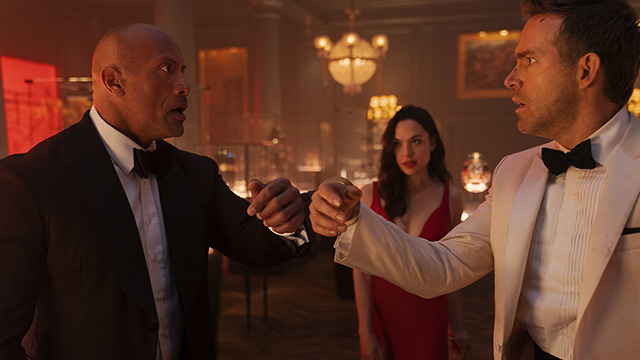 (SPOT.ph) Despite the streaming platform being made for the smallest of all screens, Netflix isn’t one to shy away from the appeal of a classic Hollywood blockbuster. Their latest film Red Notice certainly has all the makings of one—big-budget premise, huge set pieces all over the world, and of course, a star-studded cast. Directed by Rawson Marshall Thurber—whose name you may recognize from his previous flicks Skyscraper, We’re the Millers, and Central Intelligence—the film is set to premiere this November.

The premise: What is Netflix's Red Notice about?

Dwayne Johnson (a.k.a. The Rock), famed action hero with as much charm in his body as he has muscle, kicks things off as special agent John Hartley—the good guys are always named John, aren’t they? The Rock has a long-standing reputation for being the kind of movie hero (and pro-wrestling hero, let’s not forget) that everyone in the audience is rooting for. This time around, he does so while playing straight man to Ryan Reynolds’ goofier Nolan Booth—archetype-wise, a lovable asshole, but professionally speaking, a notorious art thief. The two cross paths after a high-profile-art-crime-gone-totally-out-of-whack forces them to team up. From there, the film takes more twists and turns than we can even keep track of—and that’s on a platform that lets you hit pause.

You’ll notice early on that Red Notice swings lawlessy from genre to genre. On the one hand, it’s a classic spy thriller complete with highly trained sleuths (Johnson’s character is introduced as a profiler who specializes in art-related crimes) and on the other, it’s an action-adventure movie a la Indiana Jones. The film even begins by introducing a missing artefact that dates back to the time of Cleopatra—as you might expect, the artefact is the target of Nolan’s thievery, or at least one of the targets. But no, we’re not done. It’s also a heist movie in the vein of the Ocean’s franchise or even the more recent Netflix hit Army of the Dead. Strictly speaking, the latter is how the movie primarily markets itself and it does meet that expectation thanks to meticulously planned schemes and the reliably clever schemers who execute them.

Now, keep in mind that while Red Notice is a fast-paced thriller, expect more comedy than world-ending high stakes or violent sequences—this one’s not for the action purists. The film keeps it mostly family-friendly with action shots that rely mostly on quick cuts and dexterous camera work as well as the kind of sly, self-aware score that leans more Pink Panther than it does James Bond.

The highlights: What Red Notice gets right

It cannot be understated that Red Notice moves through these various genres with bull-fighting speed—you’ll get that joke after watching—to the point that you’ll rarely know where one ends and the other begins. At the heart of the movie, however, is a more specific trope, that of the buddy cop film. And we’d argue that for all its swagger and spectacle, it’s this facet of the film that Red Notice does best.

Johnson and Reynolds fight it out together Bad Boys-style (or for the younger ones out there, 21 Jump Street-style). The film is at its most charming when it focuses on its two leading men who, for better or worse, are stuck with each other from start to finish. Johnson and Reynolds here play right into the personas they’re already known for—the former a well-intentioned good guy and the latter a joke-slinging anti-hero. So if you’re watching this one for the stars—and there’s nothing wrong with that—you’ll be glad to know they’ll mostly doing what they already do best.

Reynolds, however, in a roundtable interview with SPOT.ph, disagrees with the notion that the film is a buddy cop movie, asserting that its driving force is the triple-threat powerhouse at the center of its premise. Yes, in case the already star-studded duo of The Rock and Deadpool wasn’t enough for you, Gal Gadot—Wonder Woman herself—is here, too. Unlike the leading men, Gadot here treads slightly more unfamiliar territory. The usually heroic actress plays The Bishop, a rival thief to Reynolds’ Booth who’s cunning, crafty, and most of the time, one step ahead of her co-stars.

Even as it backflips from one genre to another, Red Notice consistently plays up the cat-and-mouse game between Gadot and the two leading men—an exploit that takes all three characters across the world from Rome to Bali and beyond. Though we maintain that the enemies-turned-bros dynamic of John and Nolan is one of the film’s main draws, we do agree with Reynolds’ assertion that you won’t be able to distinguish which of the three main actors is the true star of the film. Each gets their own chance to shine and Gadot, in particular, holds her own even as her character single handedly competes against the Johnsons-Reynolds tandem. And hey, we can’t say we don’t enjoy watching her be the villain for once.

The verdict: Should you watch Netflix's Red Notice?

In many ways, Netflix’s Red Notice has a little bit of everything: Hollywood stars, age-old film tropes, and enough witty one-liners for a "take a shot every time" game. It’s easy to say that the film isn’t always sure what it wants to be. But we can’t say we didn’t enjoy the ride, chaotic as it was. Viewers who get the most enjoyment out of this film will be those who choose not to take it too seriously—even the movie doesn’t take itself all that seriously, anyway. It’s a fun, lighthearted film that’s safe to watch with the whole family, shamelessly over-the-top, and knowingly goofy. Is it Shakespeare? Hell no. But is it a reliable watch for a mood-boosting Saturday night in? No doubt about it.

Check out the trailer below:

Greener Streaming Netflix Red Notice Movie Review Savvy Adventurer Seasoned Staying In Entertainment Gal Gadot Dwayne Johnson Ryan Reynolds
Your Guide to Thriving in This Strange New World
Staying
In? What to watch, what to eat, and where to shop from home
OR
Heading
Out? What you need to know to stay safe when heading out