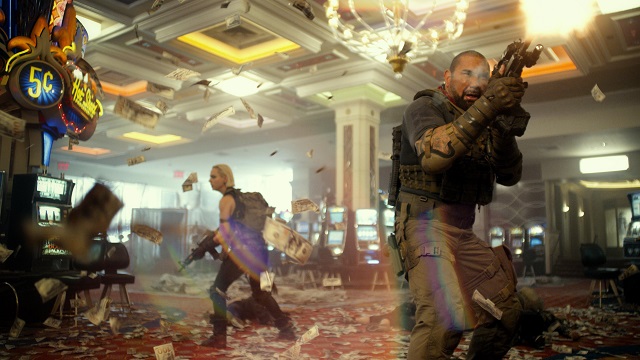 From zombie tigers to-whoa there, a vulnerable lead?

SPOT.ph) Sick of the current pandemic hellhole we’re living in? Dive right into another: specifically, the zombie-infested Las Vegas that Zack Snyder is cooking up over on Netflix. The much-awaited zombie heist film lands on the platform on May 21! If you feel like you’d rather not lose any more brain cells than you already have, we list down a couple of ways that this movie might just subvert your expectations.

Also read:
10 Apocalypse Films to Stream, Ranked by How Likely You’d Make It Out Alive
10 Gripping Zombie Films You Can Stream on Netflix

Army of the Dead (AOTD) rises above the brainless genre in these 10 ways:

Zack Snyder was all up in this thing.

Literally. The director was also the cameraman on the set of AOTD, calling the double experience “one of the most satisfying parts” of making the movie in a roundtable interview with SPOT.ph. According to him, being director usually means being in a tent far away from the actual scene just looking at the action through monitors. “But this was much more intimate, and I wanted it to feel more intimate and kind of small,” he says. “I really wanted the character moments and everything to feel really personal.” A “personal” zombie action flick? You’ll have to watch and see.

It isn’t just a zombie movie.

So we know it’s a zombie flick but Snyder is taking things up a notch by adding in a heist storyline. In AOTD, war hero Scott Ward (Dave Bautista) is tapped by a shady billionaire to retrieve a ludicrous amount of money from a vault in a zombie-infested Las Vegas. The catch? Ward and his ragtag team have to accomplish it before the U.S. government nukes the entire place in 32 hours. Recap: there’s zombies, guns, a group of misfits, and lots of money. What more could you ask for?

AOTD isn’t in a vacuum.

Social commentary, apparently. Snyder clearly wants to be the kind of zombie film that could have only been made today. Ward ends up assembling a pretty diverse team, which was a conscious decision on Snyder’s part. “I did want a diverse cast, and part of it is because I wanted to do this social commentary about immigration.”

With AOTD set years after the zombie Las Vegas, the area outside the city has been transformed into an immigration “camp” where folks the government doesn’t want to deal with—or allegedly, wants dealt with—are thrown. This was part of the world Snyder wanted to reflect; “This sort of vilification of the immigrant.”

Ward has a vulnerable side (but he probably still won’t get shot, probably).

Truth is, Bautista didn’t really think he would be a perfect fit for Scott Ward—until Snyder convinced him to read the script. “[Ward] wasn't that predictable generic action hero, but he actually had some heart and some depth,” he shares during the roundtable. Ward may be a war hero, but his medals from his time battling the zombies of Las Vegas came at a price: his relationship with his daughter, Kate (Ella Purnell). It is this extra layer that gave Ward the depth that intrigued Bautista enough to take on the role.

Out of all the stunts Bautista did and weapons he used for this movie, “I think the most challenging things for me are always going to be the emotional scenes,” he shares during the roundtable. He acknowledges that he never really had an academic background in acting so when it comes to the more vulnerable scenes, he has to draw from his own experiences which make things much more personal for him.

Still, “I don't want to be [a] stereotypical action hero. I want to be somebody who has a heart because I want people to be able to relate to me and empathize with me,” cheekily adding, “and sometimes it's just hard to do when you're a large, muscular person.”

Finally, a Filipino-American lead in a Hollywood film.

Bautista, whose father was a second-generation Filipino immigrant, talks about how most people don’t expect someone of his stature to have a vulnerable side to them. “I'm a very loving and a very emotional person,” he says, jokingly adding, “I'm so Filipino.” That big-guy-with-an-even-bigger heart personality is what made Snyder fit the role for him in the first place and so we can’t not mention that this may be the biggest Hollywood blockbuster yet to have an actor of Filipino descent in the lead.

No damsels in distress here.

Purnell had a pretty similar experience as Bautista. She was afraid it would just be your “average sort of shallow zombie movie,” but when she learned more about her character—Ward’s daughter, who just so happens to work as a volunteer at the refugee camp, she realized, “there was all this sort of depth, both politically and emotionally that I could bring out.”

“So often the women in these action movies, the male-dominated sort of genre movies, with the wives or the girlfriends always needing to be saved; I realized that I wasn’t the one who needed to be saved [in AOTD].” Purnell added that Kate’s relationship with her father in AOTD—admittedly a very so-not-real type of movie—somehow evolved in a very natural way in the story, another factor that pulled her in.

Just when you thought you’d seen every possible iteration of the zombie creature, in comes AOTD with an alpha race. Without revealing too much, we’re just going to say that Las Vegas’ closeness to a certain area plays a factor in this movie.

Snyder shares that he really wanted to play with the idea that “zombies were no longer going to be reliant on us as fuel for the spread of their kind.” The creator calls it a “dawn of a species, almost” and the movie kind of plays as well with how we, “as humans, are rude enough to stomp it out.”

…and a zombie tiger.

The presence of a zombie tiger implies that whatever infected the other humans could infect all kinds of animals too. “I always felt this notion that there’ll be zombie animals,” says Snyder. “And the idea of a zombie tiger really excited me because it just felt natural to Vegas.” We get it. But does that mean we’ll see zombie pigeons and cats and dogs and heck, how about a zombie giraffe?

There’s going to be an entire Zack Snyder Zombie Universe.

Well, there’s hope for that. The fact that AOTD is being carried by Netflix means that Snyder can pretty much play God—in that he can totally make his fictional universe exist on screen. There’s already a prequel following AOTD safecracker Ludwig Dieter and how he fell in love with, well, locks; “like a romantic comedy,” shares Snyder. The director is a master of taking a genre to the next level, something he’s done with AOTD for zombies, but the extended universe means he can play with other genres too.

Including an anime with Jay Oliva.

Another spinoff greenlit by Netflix is an anime. Why an anime? “If we didn’t do [it] animated, the prequel would cost like U.S. $300 million because it goes completely bonkers as far as the scale of the thing goes,” says Snyder. This prequel will dive deep into what went down in the OG zombie war so you can expect what kind of millions-of-dollars worth of shenanigans Snyder and team are cooking up.

Best part? Snyder shares that he’s working with Jay Oliva (The Last Airbender, Trese) on the Netflix animated series. The two have known each other for years now so we can’t wait to see what crazy world they come up with.