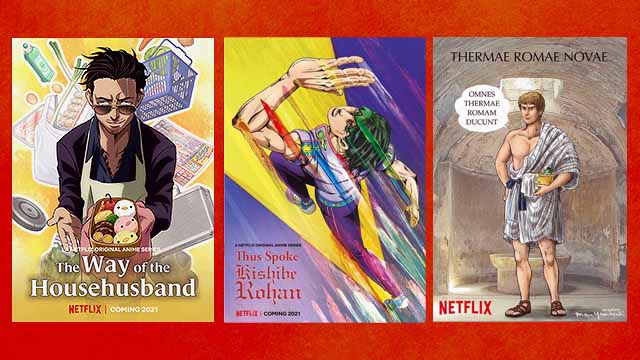 From Rilakkuma to a "househusband," we have the details of their lineup.

(SPOT.ph) It's no secret that Pinoys love anime. Before the age of streaming, the older generation would wait every week for a new mecha episode, absorbing every Tagalog-dubbed moment on the huge television sets. Today's audiences obviously have it much easier—and Netflix is about to make quality anime content even more accessible in 2021.

After blessing us with old-school anime series of our childhood, Netflix has set its eyes on creating a whole new slew of titles set to be released throughout 2021. We all know the K-Drama craze isn't dying down anytime soon but with more than 100 million households worldwide watching anime on the streaming platform in 2019 alone, the opportunity isn't one to be missed, as Netflix's chief of anime productions Taiki Sakurai put it during a media roundtable.

What's next for anime on Netflix?

Leading the lineup for Pinoy fans is the much-awaited anime series adaptation of graphic novel Trese, which will be the first all-original Netflix anime production in the Philippines. News about the anime series first broke in November 2018 so to say this series is a long time coming is a bit of an understatement. The series is set to premiere globally sometime in 2021.

The OG graphic novel is created by Budjette Tan and Kajo Baldisimo and follows the deadly Alexandra Trese as she fights crime—of the supernatural kind—in Manila's underbelly. Plus, you'll be excited to know that Jay Oliva, who has worked on titles such as the Legend of Korra and Wonder Woman is the series' executive producer.

And with the inclusion of Netflix's first Pinoy anime series, it is safe to say that the artform is no longer what it once was. "In the recent 30, 40 years, the evolution that has taken place is quite significant," says Mari Yamazaki, a prominent manga author who is also part of the Netflix team. Nostalgia has always been attached to anime in one way or another but she feels that the time has come for the medium to grow. "Anime itself is now coming to the first season, a new level of maturity."

"Battles, sci-fi, and fantasy have always been a big hit. But more recently, people are interested in things like comedy, horror, and more feminine content; these are what we see people are viewing. So I think there is more diversity in what kind of stories people want to see," says Sakurai. And building on this growing and diversifying interest, Netflix has announced five brand new titles set to join their growing collection.

Check out these upcoming original anime projects for 2021:

Yup, the lovable, blundering bear Rilakkuma is coming back in a big way. This stop-motion series will follow Rilakkuma, Korilakkuma, Kiiroitori, and Kaoru go to an amusement park—that is right about to close. It will be directed by Masahito Kobayashi and is sure to be a bright spot we can all use to put 2020 behind us.

Yamazaki's popular manga will take on new form as an anime series next year. It follows Lucius, a bath designer in ancient Rome who slips and somehow ends up in present day Japan—leading to a hilarious clash of culture, with the focus on the two people's bath practices, that spans space and time. Yamazaki studied and art and currently lives in Italy; she promises new storylines for the series!

Remember Battle Royale? This series is a survival story set in high-rise buildings where humans must kill or be killed. Yuri does everything she can to survive—but to do so, she must kill the mysterious mask-wearking enemies and the other people she's been trapped with. It is based on the manga by Miura Tsuina (Ajin) and Takahiro Oba (Box!)

This spin-off from JoJo's Bizarre Adventure: Diamond is Unbreakable dives into the Japanese love of the introspective (a.k.a. unique perspectives and observations only they could have come up with). Consisting of four episodes, the stories will revolve around the things artist Kishibe Rohan heard and saw on his tours collecting material for the manga.

In a culture where gender roles are practically set in stone, this lighthearted series goes the unconventional route. The hardened Tatsu is known as a legend in the Yakuza underworld—and now lives out his days as a "househusband." He takes on the duties of keeping a household functioning with the same fervor he had during his Yakuza days.

So is it time to say goodbye to anime as we know it?

The experience of watching anime may never be exactly like it was plopped down in front of the TV set on lazy afternoons making a rei gun along with Eugene, chanting "Tapusin! Tapusin! Tapusin!" ever again—but that isn't a bad thing. It's time to move on and grow (yes, we're still talking about anime here). The times—and technology—have changed, points out Sakurai, and he and the Netflix team are all ready to see where they can take anime.

As a Japanese artform, anime can enter into rather political territory. In Japan though, Sakurai points out that anime is simply anything animated. "So whether it's Disney or Pixar, we call it anime; Studio Ghibli is also anime, Pokémon, Naruto, is obviously anime." Quite like how Chinese food in China is simply "food."

"I don't feel that it's necessary to define it into this one thing," continues Sakurai. "I think that anime is like sushi," he adds with a laugh. He explains that he used to live in England, in a place that had absolutely zero knowledge about sushi, much less actual restaurants that served the Japanese staple, but now, in that very same place, are a lot of sushi restaurants.

"It's a very transitional period. And so people would say 'If it's not cooked by a Japanese, it's not sushi,'" he says. "But nowadays, people are more open to different styles of sushi. Like, no matter who the chef is, what they create could still be sushi so I feel that it's going to take a similar road." So whether you're into sushi or anime, or both, it looks like you best get ready for something new.