All of Us Are Dead Memes End Up Billboards in Gigil Campaign
Loading
Already a member? Log in
No account yet? Create Account
Spot.ph is your one-stop urban lifestyle guide to the best of Manila. 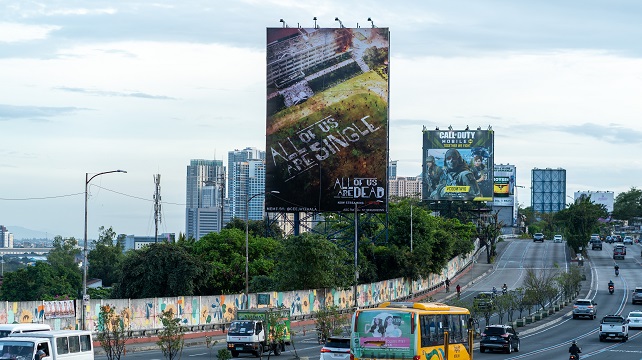 How This S.A.D. All of Us Are Dead Meme Ended Up on a Massive QC Billboard

(SPOT.ph) So there's two things we can guess about you, dear reader, based on the fact that you clicked on this article. First is that you've probably watched the hit Netflix show All of Us Are Dead and second is that you're probably er, celebrating Single Awareness Day instead of Valentine's this February. If we hit two birds with one stone, then ...we feel you, don't worry. But hey, at least there's a huge billboard celebrating the super specific combo! And better yet, it's a meme made by a student from Negros Occidental. Flashback to all the times your parents said "kaka-computer mo 'yan eh."

Also read: That All of Us Are Dead Girl With the Backpack Up Front? Yup, She's Pinay

South Korean thriller zombie series All of Us Are Dead has had the Philippine streaming scene in its grips since it landed on Netflix on January 28. Set in a high school with students trying to make it through more than just the typical teenage problems—we're talking the undead here—the series hit a chord with the Filipino crowd. No denying high-school life (oh my high school life) is an extra special part of our growing -up years so it isn't so much a wonder us horror-loving folk ate the series up even more.

And with all the craze came the memes, of course. We're sure you've seen them floating around the Internet—and on billboards, too. Netflix stepped up the game with creative ad agency GIGIL by taking the memes online and putting them up on massive billboards across the nation.

The clincher though has to be a very timely meme by 18-year-old Ceejay M. Faala of Negros Occidental. Their meme is currently up in Project 4, Quezon City, declaring a very loud "All of Us Are Single" right in time for Valentine's Day. Can relate? We feel ya.

Faala tells SPOT.ph that they weren't expecting the meme to go viral, much less end up on a QC billboard. "It's been a long story," they say in a text exchange, explaining that the meme originally made the rounds on Facebook after it was posted by a friend. "I'm so very thankful [for] Sam. He is the one who reposted my meme and goes viral and I approached him and give my thanks." Faala had already left it at that—until folks from GIGIL approached Sam online about big plans for the meme. "It's unexpected, surprising and [I have] mixed emotions that my meme will be on the billboard," says Faala, cheekily adding "I consider it my best legacy ever made as a memer."

Since "high-school nostalgia connects Filipino adults all over the country, we transformed the usual billboards that accompany a Netflix launch into meme billboards," says GIGIL in a statement about this campaign. What really drove the relatability of the memes-as-billboards is that—aside from them being quality memes—they "carry with it a 'core memory' for every Filipino who went through high school."

"Netflix allowed a language that was born online, memes, to live in the real world through their billboards nationwide," added the agency.

#Hugot aside, Faala was just having fun making the meme as a fan of South Korean horror series and also, "for all singles out there without partners this upcoming Valentine's Day." As the language tutor and student reminds us, "just don't rush time," in our exchange. "It doesn't mean kung sino lang 'yong nandyan siya nalang, but the purest one is kung sino talaga ang compatible sa puso mo, 'yong masasabi mo talaga na mahal mo siya."