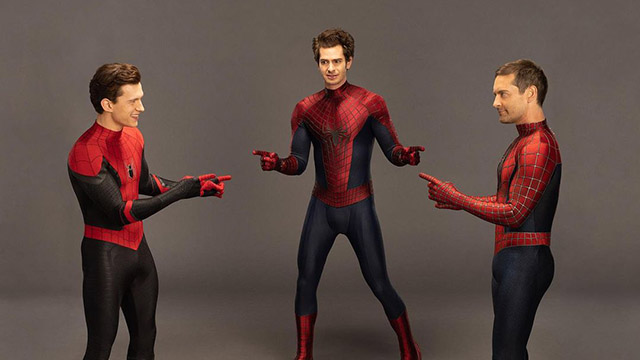 Finally: The Real Spideys Came Together and Recreated That Famous Meme

Along with the photo came the announcement of bonus Spider-Man footage.

(SPOT.ph) It finally happened. All three Spider-Man actors from the past 20 years— namely Tobey Maguire (of the Sam Raimi-helmed trilogy), Andrew Garfield (from 2012's The Amazing Spider-Man and its 2014 sequel), and of course, Tom Holland, (the Marvel Cinematic Universe's resident friendly neighborhood Spider-Man)—joined forces to take a photo recreating the famous "Spider-Man Pointing at Spider-Man" meme. ICYDK, the meme was taken from a 1960s Spider-Man cartoon, particularly an episode where the villain attempted to impersonate the titular hero. Maguire, Garfield, and Holland paid homage to the Internet-famous image in a photo posted to Marvel's Insagram page late on the night of February 23, local time. Before we provide some context, here's your obligatory spoiler warning—read on with caution!

In case you've been living under a rock, the three aforementioned actors appeared together in the 2021 film Spider-Man: No Way Home thanks to a multiverse-bending spell gone awry, which brought Peter Parkers (and their respective arch nemeses) from different universes into one place. Though rumors of old Spideys and villains coming together for No Way Home had been circulating for months before the film's premiere, fans were still in awe upon seeing the actors together on the big screen—especially as many had grown up watching Maguire's and Garfield's versions of the character. And now that the secret is finally out, Marvel is making the most of the once-in-a-lifetime on-screen collaboration—and the meme-inspired snapshot is only the beginning.

Marvel to Release Spider-Man: No Way Home on Digital, Blu-Ray, and DVD With Bonus Footage

Along with the photo of Maguire, Garfield, and Holland pointing at each other came the announcement that Spider-Man: No Way Home will be available on digital starting March 22. That means you can purchase the movie on Apple TV, Prime Video, Google Play, and other streaming channels next month. And on April 12, the 4K Ultra HD, Blu-Ray, and DVD versions of the film will be available at selected stores including Amazon, Target, and Walmart.

With the digital and DVD versions of the movie comes a ton of bonus content. The soon-to-release digital version of No Way Home will feature over 80 minutes of behind-the-scenes footage including 20 minutes of Maguire and Garfield, hidden easter eggs, bloopers, outtakes, and so much more. The announcement comes just days after rumors of a Spider-Man: No Way Home extended cut had been making the rounds on the Internet. Right now, we're crossing our fingers that the bonus content will be available in the Philippines, too!