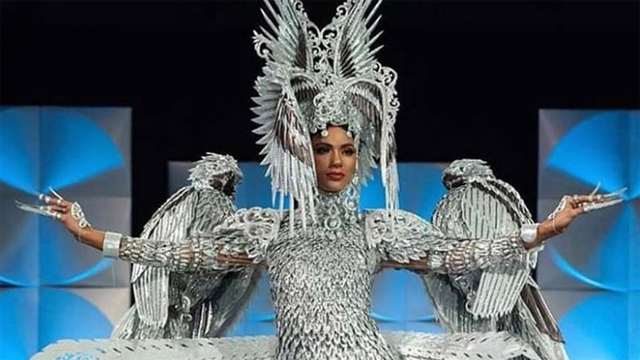 Highlights From Miss Universe 2019: 10 Memorable Moments You Need to See

From runway falls to statements made!

(SPOT.ph) In case you haven't heard the news, Miss Philippines Gazini Ganados is no longer in the running to become Miss Universe 2019. South Africa took the crown this year, but that doesn't mean you have to look back on the pageant with a heavy heart. A lot has happened, but we rounded up some moments from the Miss Universe 2019 pageant to keep you up to speed.

Here are the highlights from the Miss Universe 2019 pageant:

Miss France falling, then getting back up.

Wearing heels is uncomfortable enough, but imagine having to look good while doing so. While pageant contestants are expected to do this without breaking a sweat, you can't avoid the occasional trip-up. Miss France Maeva Coucke slipped during the swimsuit portion of the pageant, but she graciously got back up as if nothing happened.

Miss Malaysia taking a fall, too.

Even Miss Malaysia Shweta Sekhon took a dip, but stood back up right after.

Miss Universe 2019 Catriona Gray telling the girls it was okay to fall.

If anyone knows what these girls are going through, it's 2018 Miss Universe Catriona Gray, who was there to host the National Costume portion. She congratulated the girls for a job well done and asked the audience to continue showing support for all the candidates for trying their best. A queen, indeed.

Have you ever been on a sidewalk or a hallway and the big group ahead of you took up the whole space and paced slowly? You might have made quick moves to overtake, and let us tell you, Miss Universe candidates can relate. Just look at Miss Equatorial Guinea Serafina Nchama Eyene Ada! The runway didn't have enough room for two candidates at that time but she had no problem taking a detour.

Aside from showcasing the country's culture, colors, and pride, Miss Brazil Julia Horta took it as an avenue to bring up her advocacy: to stop violence against women. She was dressed in a sequined football jersey in the colors of Brazil's flag, but what really made a statement was her banner that said "Stop violence against women." This is a shoutout to Swedish-Brazilian football player Marta Silva, who is regarded as one of the best football players of all time, among men and women, but doesn't seem to be getting as much love as male football players. Horta used the national costume to call for gender equality and women's rights.

Miss Laos' costume and statement on the Amazon fires.

Laos has been known to bring huge, elaborate costumes during this portion and this year is no different, save for a small addition that makes a big statement. Miss Laos Vichitta Phonevilay's elephant costume has a lot of moving parts but what steals the show is a banner depicting a burning Earth and in big bold letters, "STOP FIRE, SAVE AMAZON." Wildfires in the Amazon rainforest aren't unusual, but it was at an all-time high in August 2019.

Miss Philippines wowing in her costume.

Just look at it. Look at her. Cebuano fashion designer Cary Santiago is responsible for our candidate's national costume, and she took inspiration from our national bird, the Philippine Eagle. The designer says it's not as flamboyant from afar, but it all boils down to the details of laser-cut lace which are all hand-sewn. Ganados played the part by looking left to right like an actual Philippine Eagle.

Vietnam's Miss Universe 2018 candidate H'Hen Nie belongs to the country's Rade ethnic minority. A strong advocate of education for all, fighting against poverty, and making more people aware about Vietnam's minority, Nie is often seen wearing her traditional garb to formal events and speaking of the struggles of her people. When she passed on the Miss Vietnam crown to Nguyen Tran Khanh Van on December 6, she wore traditional attire and took her last walk as Miss Vietnam barefoot.

Steve Harvey mixing up names—again—and being right all along.

His 2015 mistake involving Miss Colombia Ariadna Gutiérrez and Miss Philippines Pia Wurtzbach is a thing of the past now. We made jokes about it, and we all moved on. It's a thing that happened that we can all go back to for kicks, but it seems the host had a mix-up again. Stick with us, because a lot happened: First, he called on Miss Philippines Ganados for best national costume, but it seems Miss Malaysia Sekhon really won. Hours later, Miss Universe organizers clarified that the Philippines is the rightful winner. Cut Harvey some slack.

As with all good things, Gray's reign, too, must come to an end. Before crowning Miss South Africa Zozibini Tunzi as Miss Universe 2019, Gray took her final walk in a dazzling blue number from Mak Tumang. She ended her run as Miss Universe by saying everyone's dreams are valid and if that doesn't inspire you, we don't know what will.