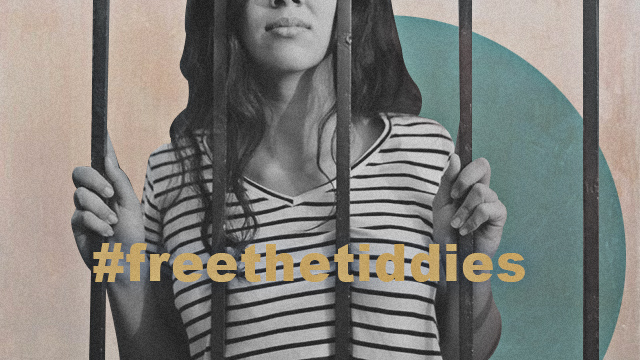 a.k.a. Surprise: Women Don't Wear Bras When We Don't Need To

(SPOT.ph) Voice-over artist Inka Magnaye is not the latest woman to have to defend herself from a lewd commenter online and, unfortunately, most likely won't be the last. The popular talent recently posted a cool video of her chilling at home doing a voice-over challenge on TikTok, going from different tones and moods per the pretend commercial. And while most people were on track and paying attention to the actual content, it looks like all one commenter saw was the fact that she, unsurprisingly, wasn't wearing a bra. The lewd comment has since been deleted so we'll leave you to imagine what sort of stupid, baseless statement it was.

Magnaye, who also posted the VO challenge video on Twitter, took to the platorm to vent out her frustration at having been sexualized and objectified by the person's comment late on February 9. She also called the commenter out specifically on Twitter—at which point the person reached out to her and asked for her to delete her call-out. Magnaye tweeted a very frustrated "So mag so-sorry lang kayo kung na call-out," the same night.

The artist shared screenshots of her conversation with the commenter, who opened with an "I'm really sorry," and asking Magnaye to delete her call-out for the "sake of my girlfriend," whom it seems he somehow dragged into the mess he created. As she pointed out, "Hindi nyo kailangan mambastos ng babae."

Both the lewd comment and Magnaye's call-out have been deleted as of writing—but here's hoping the commenter really won't forget this lesson (assuming he hopefully did learn something from this experience). Folks on Twitter have since show support for Magnaye and her right to not wear a bra and, more importantly, not be objectified for any reason whatsoever.

Another public personality that sparked a #FreeTheTiddies conversation recently is Julia Barretto, whose braless pics while also in her own home gained a lot of traction in May 2020. Barretto, who has always been very vocal about her choice not to wear bras as a proud flat-chester, posted several pictures on her IG of her lounging at home while in quarantine—prompting negative comments about the fact that she chose not to wear a bra.

Celebrity doctor Vicky Belo swooped in with her own IG post defending the actress's choice to go braless. With her medical background, she stated that "Sometimes, it's better not to wear a bra if you're just lounging around the house," citing better blood circulation and the avoidance of possible body pains, accompanied by #LetTheBreastsBreathe.

The fact that wearing a bra is ultimately a choice and most women choose not to do so when comfortable in their own homes just keeps whooshing over people's heads. Fact is, most women would skip the bra whenever possible, and the chances of us wearing one while chilling in our own space is slim to nil. And yes, boobs exist. And no, they aren't sexual. If we choose to share a snap that happens to show us sans a bra and you choose to sexualize us, frankly, that is a "you" problem.

The backwards notion of the ideal Filipina as some sort of Maria Clara character—who people seem to keep forgetting had a tragic ending—remains strong in the Philippines. You can see it whenever people are blamed for being harrassed, it was at the core of Frankie Pangilinan's #HijaAko movement, it's there whenever someone uses the "kababae mong tao" line, and of course, the grand winner of the long list of mentalities to retire, "boys will be boys." Lewd comments, and people who see nothing wrong and/or justify said comments, are just a part of the problem.

Adventurer Savvy Seasoned Inka Magnaye Tiktok Victim-blaming Staying In Explainer
Your Guide to Thriving in This Strange New World
Staying
In? What to watch, what to eat, and where to shop from home
OR
Heading
Out? What you need to know to stay safe when heading out