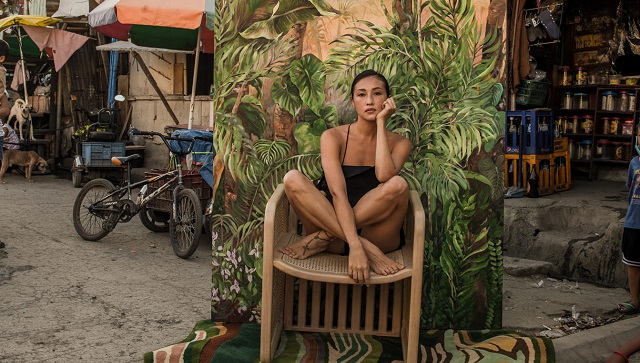 Heussaff's picture promoting her exhibit has been getting a lot of flak.

While there's nothing wrong with Heussaff promoting her exhibit using her own pieces, it seems people took issue with the setting she chose. The picture had around 670 comments and 5,400 shares on Facebook—with many saying that her choice of "background" was not a smart one.

Admittedly, there's something unsettling about her sitting on what is sure to be thousands, if not hundreds of thousands, worth of her own art with shanties in the back—especially since she describes the exhibit as all about her "love, appreciation and hope for our country and our people," according to the caption. But we can kind of see her point, if you squint real hard.

Heussaff is known for taking inspiration for her paintings from the world around her; her second solo exhibit in 2017, Kalsada, featured paintings of people from all sorts of backgrounds—including pieces based on pictures of people she sometimes took from her car. Part of the proceeds from the sales of this exhibit went to the Kalipay Negrense Foundation as a way of Heussaff giving back to the kids who inspired her.

Now if you wonder why your parents tried to guilt you about starving children whenever you couldn't finish your food as a kid, it was probably because of these huge drives that, while effective at raking in money, also oversimplified and sensationalized the complicated, systemic, and chronic poverty that still assails parts of the world to this day. Eventually, their power to shock and disturb faded. Don't lie, you've seen those same pictures of real, starving children, being used as memes and referenced in media (but generational humor is an entirely different topic, we digress).

Heussaff has responded to the more polite comments on her IG post of the picture. In her replies, she says, "I love my country and everything that makes it what it is," explaining that the background is "all about not turning a blind eye to what goes on around us." Heussaff has asked people to see the whole show before laying judgement, saying that she will be posting the art online as well.

So far, we've got a single picture with an ill-judged setting from the exhibit. As far as promotional materials go, it has done its job and gotten the Internet abuzz with all the hot takes. Anyone else interested to see how the rest of the exhibit might change how that one picture is viewed?

Adventurer Savvy Solenn Heussaff Trending Viral Staying In Heading Out
Your Guide to Thriving in This Strange New World
Staying
In? What to watch, what to eat, and where to shop from home
OR
Heading
Out? What you need to know to stay safe when heading out